Glad to be Gone

Shelby Lynne leaves her Nashville roots behind with I Am Shelby Lynne. 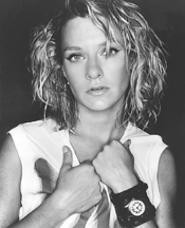 Shelby Lynne's life reads like one of the country songs she grew up on: Her father shot her mother, then turned the gun on himself, leaving teenage Shelby to care for her younger sister. It's not something she talks about today, but one senses that the demon of this horrendous act is always lurking behind every move.

"Every bit of my life is in my songs," she says. "It's easy to write them. I just write about what I know in my own life, and I don't have a problem with that."

Maybe. See, Lynne causes problems. To Nashville, which she once called home; to record executives, none of whom seem to know what to do with her; and to radio, which won't play her. She has a reputation as a first-class pain in the ass, a thorn in Music City's ultra-conservative side. She's been arrested, is proud to be called a hell-raiser, and isn't afraid to mouth off on what exactly is wrong with country music. It's no surprise, then, that Lynne, after a decade of struggling in Nashville, packed her bags and relocated to the desert resort area of Palm Springs.

"I had done Nashville for 10 years, and I just wanted to move on," Lynne says of the move that's revealed quite literally in her majestic new album, I Am Shelby Lynne. "I didn't feel like making records there anymore. I wanted to write my own songs, and you just don't write a song like 'Leavin' and cut it there. It just doesn't work."

I Am, as its title implies, is the work of a single-minded artist, a glorious oasis in the wasteland of contemporary music. Adult, soulful, and controlled, it's the work of an artist breaking free of her past and starting all over again. Gone are the country conventions and back-road ballads. And gone are Lynne's days of leaving her career in the hands of others. Lynne and producer Bill Bottrell, the man behind Sheryl Crow's Tuesday Night Music Club, made the record without a record deal, and that gave them complete freedom to do whatever they wanted.

"I just started making the record, and I had no label involved until it was turned in," Lynne explains. "I had an independent deal in Nashville, and I asked them to merge with Island. Actually, they weren't Island then; they were Mercury, so all that changed. And I already had the deal set up through my independent company."

Lynne sought Bottrell out and sent him a demo made in her living room.

"I really wanted to work with him," she says. "He was the one; I knew I could do it with him. I liked the production, I liked the clean sound, and I liked the fact that he uses steel guitars on a rock record. So I could do my country roots and still do soul music."

And that's pretty much what I Am sounds like: country-tinted R&B, a little like Dusty Springfield's classic Dusty in Memphis. In fact, the album's stunning opener, "Your Lies," could very well have come from Springfield's Memphis sessions.

"That's a very special song," agrees Lynne. "After I wrote it, we just pushed 'record' and let the feeling flow onto the record."

There's plenty of feeling throughout the record -- a result of years of not being allowed to express herself.

"The inspiration behind this album was just living," Lynne says. "And everything I love, music-wise. There's something on the record that represents all the kinds of music that I love, from John Lennon rock and roll to Al Green soul to Jimmy Webb-style songwriting."

Given her upbringing, Lynne's list of influences makes sense. She was raised in Alabama on Chet Baker, Al Green, and Marvin Gaye records, the ghosts of which can be heard running through I Am's grooves. And not surprisingly, this tough gal prefers the guys.

"I just like male voices," she shrugs. "But Chet Baker has a female sensibility in him. I like that whole androgyny feel."

But it was her big, country female voice that landed her a record deal in 1988, launched with a duet with George Jones, who hand-picked Lynne to accompany him (despite all her troubles with Nashville, she still considers this one of the greatest moments of her life). Lynne had moderate country success, but over the next five years (and about as many albums), she grew increasingly frustrated with the machinations of the music business.

"It's difficult expressing yourself in Nashville," she explains. "I never really concentrated on songwriting until this record. I really knew that I had something to say, and I said, 'What the hell. I really don't have anything to lose; I'm going to make a record that I like.' And until I got ready to do it, I never really considered writing my own songs. It just kind of happened when it was time. It was a little stifling before, but that's the Nashville way. I did it for 10 years, so it couldn't have been all that bad."

Lynne has no sound theory as to why the Nashville hit machine couldn't make her a star. After all, she has a big, bad voice suitable for both heartbreaks and honky-tonks.

"I just wasn't cutting the kinds of songs that are hit records, I guess," she estimates. "I really don't know what happened. I never really figured that out. It's just easier to break an act that's a puppet, as opposed to one with an opinion."

Hence the move and the wresting back of control. Lynne set up shop in her Palm Springs home -- "I love the desert, and I can just hide away here" -- and began constructing the intimate material that would eventually become I Am.

"I like recording in kitchens and living rooms, and feeling the room," Lynne says, admitting that quite a bit of I Am was indeed recorded in her kitchen. "I really don't like the studio environment at all."

Lynne says many songs were written during this period, and that she and Bottrell took the best ones and put them on the record. She also concedes that there was some worry that the album was too stylistically varied, that not staying in one place may make listeners equally anxious. "But I don't give a damn, as long as it's good," she says.

"I'm not into boring people to death with the same tempos and the same vibe on everything," she continues. "I get bored too fast. I have to mix it up. That's why there's country and rock and soul and jazz all over this record."

Expect the same from Lynne and her "six-piece rock and roll band" on tour throughout the rest of the year. Don't anticipate, however, that anything from Lynne's Nashville days will be included in the set. She says she's concentrating on "moving forward."

"I don't see the need [to play] stuff I was never happy with to begin with," she says. "I mean, they're there, and they're a part of me, and I couldn't have made this record without them, but . . . I learned to do what's right for me first. It's not about hit records. It's not about airplay. It's about going out the old-school way and playing shows for people and doing music that you believe in. For 10 years I made albums I wouldn't even do in the shows. I got happy with what I was doing. And unless I'm happy, I can't sell it."