A new Cleveland sports book proves it hasn't been all bad. 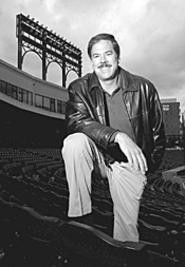 Bob Dyer admits it was kinda tough gathering positive material for the "glorious" part of his book, Cleveland Sports Legends: The 20 Most Glorious and Gut-Wrenching Moments of All Time. After all, Cleveland sports history is built on crushing and embarrassing incidents, from Red Right 88 to Beer Night at the old stadium. "Most other cities have a lot more positive [moments]," says the Beacon Journal staff writer. "But it's a shared experience, even if it's negative." After researching more than nine decades of baseball, football, basketball, and golf, Dyer came to the conclusion that "people can look back fondly, with distance," he says.

The book -- which places the Browns' 1964 and the Indians' 1948 championship titles at the top of the list -- is both a history lesson and a warm look at fanatical Clevelanders. "I wanted to create some of this stuff for people who weren't there," Dyer says. "But it's also for people who were there and are looking for somebody to cry with them." Dyer signs copies of Cleveland Sports Legends from 7 to 8 p.m. at Borders Books & Music (9565 Mentor Avenue in Mentor). Admission is free. Call 440-350-8168 for more information. -- Michael Gallucci

Journalism Made Cool
Shattered Glass is a riveting boost for the biz.

Before reporter Jayson Blair embarked on his fiction-writing career in The New York Times, Stephen Glass fabricated more than two dozen stories in The New Republic. His career, and the unraveling of it, is the subject of Shattered Glass, a new film that explores how a manipulative and ambitious kid cozied up to his editors, bamboozled them with compliments and flash, and compromised the esteemed news magazine in the late 1990s. Hayden Christensen plays Glass as a talented but defective writer. The performances are sharp; the narrative -- which details the unearthing of the fictitious story that busted him -- is even sharper. Not since All the President's Men has journalism fared so well onscreen. Even copy-editing looks sexy. Shattered Glass opens Friday at the Cedar Lee Theatre. Go to clevescene.com for a full review. -- Michael Gallucci

A Lot Like Christmas
Everything for the holidays is at the I-X Center.

Seventeen years ago, the husbands of Ginger Palmer and Donna Sanfilippo hatched an idea that the wives have since turned into an I-X Center-sized event. Cleveland's Christmas Connection is a 950-booth bazaar of everything for the holidays -- from ornaments to handmade tree skirts to lamps made from antelope horns. There's also the Sugarplum Shop and Kidsworld, where little ones can purchase gifts, decorate cookies, and ride a miniature train. It all happens from 10 a.m. to 8 p.m. Thursday, 10 a.m. to 10 p.m. Friday and Saturday, and 10 a.m. to 6 p.m. Sunday at the I-X Center, 6200 Riverside Drive. Admission is $8.75 (kids 16 and under get in free); call 440-835-9627. -- Cris Glaser

There's no rum-laced eggnog at Stan Hywet's Wine Tasting: White Christmas. Instead, they'll toast the holidays with a selection of classic whites, including the Australian Semillon, a couple of ultra-sweet ice wines, and bubbly. The sipping starts at 7 and ends at 9 p.m. Friday at Stan Hywet Hall & Gardens, 714 North Portage Path in Akron. Tickets are $26 to $33. Call 330-836-5533 for reservations. -- Cris Glaser