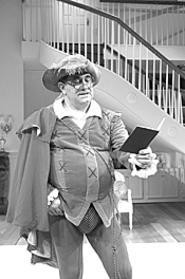 "Put a man in a dress," P.T. Barnum once said, "and the world will beat a path to your door." Actually, Barnum never said it -- but the truth of the statement cannot be denied. From Marilyn Manson to Milton Berle, countless guys have donned high heels and eyeliner to draw attention to their acts, because there's always been something scandalous and faintly shameful about men cross-dressing. It doesn't work as amusingly the opposite way, since women who adopt masculine dress and behavior are generally seen as pursuing the admired qualities of strength and toughness. In short: A sissy is a freak, but a tomboy is someone you want to have play second base on your softball team.

Still, one might think that, by this time, the titillation of seeing a man in a gown and makeup would have gone the way of Hedwig's other inches, but there's a new play now at the Cleveland Play House that would claim the opposite. In Leading Ladies, playwright Ken Ludwig has turned back the clock to the 1950s and concocted a gender-switching plot with all the nuance and subtlety of an early I Love Lucy episode.

Ludwig has perfectly captured the vibe of an audience-pleasing, mid-20th-century stage comedy: broad characters who frequently run in and out of doorways spouting predictable gag lines, while nary a naughty word is spoken (when a character refers to sex, it's usually done with a vigorous arm thrust accompanied by a guttural sound effect). However, the often banal script is given such a spirited performance, by a talented cast under the direction of Ludwig, that the production survives the alternately forced and hackneyed story line.

Two Brits, Leo and Jack, are itinerant Shakespearean actors, putting on readings in front of uninterested Moose Lodge gatherings in small Pennsylvania towns, until they read about a rich local lady, Florence, who is looking for her long-lost nephews, Max and Steve. Oops -- it turns out those are just nicknames, and the lost relatives are really nieces Maxine and Stephanie. Of course, the boys decide to slip into their Titania and Cleopatra costumes, show up at the old bag's doorstep as the prodigal progeny, and share a $3 million inheritance with Meg, their supposed cousin. To add to the hilarity, one of the nieces is a deaf-mute, with whom people communicate by talking directly into her outstretched fingers.

As one might expect, there is the odd assortment of secondary characters who add minor plot convolutions. Meg is about to marry a money-grubbing evangelical minister named Duncan (a ramrod-stiff Mark Jacoby), but really she just wants to become an actress. Meanwhile, Audrey and Butch, played respectively by Lacey Kohl and Tim McGeever, are two sweet but dim-witted townies who are also engaged. But before you can say "Bosom Buddies," Leo/Maxine falls for Meg, Jack/Stephanie is smitten by Audrey, and the incompetent family doctor (called, inevitably, Doc) continues to misdiagnose Florence's status as a living being.

The script's comic approach frequently has the feel of a predigested meal, served lukewarm (Doc to Minister Duncan: "I enjoyed your last sermon. Best sleep I've had in years"). And although there are a couple of interesting twists toward the end, anyone who's seen even one TV sitcom could easily forecast the eventual outcome. Would that Ludwig had put as much energy into his writing as he did his direction, for he makes sure his cast leaves no expression ungrimaced and no gesture unfinished, as they wring every possible laugh out of his material.

Brent Barrett is lean and determined as Leo and gives a chiseled Kate Hepburn-esque turn to Maxine. As Jack, Christopher Duva is easily gulled by his pal and makes an innocent, wide-eyed, blond-wigged Stephanie. The best performance is turned in by Erin Dilly, who blends the goofy innocence of her character with a determination to follow her theatrical and romantic stars. The relatively small role of Doc is played by the most recognizable actor, Dan Lauria, who played the gruff but loving dad on TV's The Wonder Years. And tiny Jane Connell is a treat, whenever she totters out and bellows like a stevedore as the near-dead matriarch Florence.

This world-premiere production, co-produced with Houston's Alley Theatre (where it goes next), is intended to make its way to Broadway, as have other plays by Ludwig such as Moon Over Buffalo and Lend Me a Tenor. For that to happen successfully, this script will have to do more than simply mimic the bland theatrical offerings of five decades ago. But whatever its New York destiny, Leading Ladies is sure to become a community-theater staple for many years to come. After all, it's hard to keep men out of their dresses.