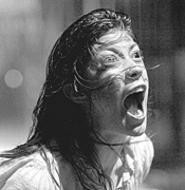 The Exorcism of Emily Rose, which is based on a true story the same way Harry Potter and Star Wars movies are, is the latest movie of this bloody (awful) year trying to scare the money right out of your wallet. It has but one thing going for it: a cast filled with Oscar nominees, including Tom Wilkinson as a priest accused of helping to kill a young woman he was trying to save (from the devil, booga booga booga), Laura Linney as the defense attorney trying to keep said priest out of the clink, and House of Sand and Fog's Shohreh Aghdashloo in a part so small, it'd take you longer to spell her name than it does for her to deliver her lines. Slumming it in a high-rent production of lowbrow material -- "Hey, you dipped your Law & Order in my Exorcist!" -- they take this nonsense seriously, to the point of rendering it giggle-out-loud funny. Not in a long while has a movie been so somber and silly all at once.

It is certainly a bad omen when a preview audience giggles at scenes intended to be frightening. Free-movie crowds, grateful for the air conditioning this time of year, will usually devour almost anything, no matter how inedible. Yet the longer the movie played, from Tuesday night seemingly into Wednesday morning, the louder their laughter got, to the point where you began to wonder whether this wasn't intentional comedy after all. One almost pities writer-director Scott Derrickson, who will walk into a theater one afternoon to see how the movie's playing and be greeted not by shrieks of terror but the paralyzing howls of disbelief and derision.

It's a sure sign of filmmaking laziness when the director uses a gimmicky soundtrack to amp up his chills; if the story ain't working, get a kitty-cat to meow into a microphone. Even before the opening credits roll, this is what we're treated to: amplified screams layered over the sound of labored panting and other assorted grunts and groans and guttural noises, which give way to a silent scene of a barbed-wire fence dripping with blood, which is used to spell out the title of the movie. Nothing subtle there, but points awarded for cleverness and cheesiness; more thought went into these few seconds than the entirety of what follows.

And what follows is actually hard to describe -- a tedious courtroom battle commingled with the flashback tale of Emily Rose (Jennifer Carpenter), who leaves her idyllic country home for college and, while alone in her dorm room one night, is raped by an invisible demon, suggesting that Derrickson and co-writer Paul Harris Boardman have seen 1981's The Entity a few too many times. But Emily Rose's possession is back-burnered for much of the film, which takes place inside the courtroom, where Linney's lonesome Erin Brauner dukes it out with a Protestant prosecutor played by Campbell Scott, whose mustache does most of his heavy lifting. Theirs is intended to be a battle between believers and nonbelievers -- between the religious right and the religious wrong, if you will -- but plays more like a fixed fight, with a resolution so outrageous, you'll conclude that the Michael Jackson jury had more sense.