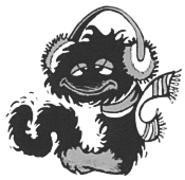 Dick Goddard doesn't understand what the big deal is over a chubby worm. Whatever it is, it's enough to propel the 31st annual Woollybear Festival on Sunday. The legend behind the black-and-orange caterpillar is based on an old farmer's tale: If the critter puts on a few extra ounces in the fall, it's predicting a harsh winter. "It's amazing how many people put credence into this," says Goddard, TV-weather guru and the festival's founder. "But I say, don't kill Santa Claus."

Throughout the day, kids and worms compete in contests. The latter participate in the audience-favorite Woollybear Derby. One year, Goddard recalls, the air was so nippy, the competitors copped an attitude. "They curled up and they wouldn't race," he says. "But thanks to gravity and Isaac Newton, we eventually got a winner." The festival runs 9 a.m. to 5 p.m. on Liberty Avenue in downtown Vermilion. Admission is free; call 216-432-4246. -- Cris Glaser

Near West Theatre's original production encourages kids to ask, "Who am I, why am I here, what am I supposed to be doing?" says playwright Jodi Maile. It's called Hercules vs. Godzilla, and yes, the giant radioactive lizard makes an appearance. It's a morality play based on the mythical tales of Persephone, Narcissus, and Pandora. "What do they mean to us today?" asks Maile. "There are not necessarily answers. But at least kids will think about some big things." It begins at 7:30 p.m. Friday and Saturday and 3 p.m. Saturday at St. Pat's Club Building (3606 Bridge Avenue). Tickets are $6; call 216-621-3242. -- Diane Sofranec

Extreme Deep: Mission to the Abyss, opening Saturday at the Great Lakes Science Center, is an intense look at the world that exists two and a half miles beneath the ocean's surface. And, as we well know from repeated viewings of both the Ed Harris flick and Finding Nemo, the abyss is one scary place. "People put themselves in danger, going down that deep," explains Val Davillier, director of exhibits. "It's just as dangerous as going into orbit." On display are such deep-sea-centered (and interactive) items as a replica of a 17-ton submarine, a workable robot arm, models of underwater life forms, and a skin-squeezing pressure cuff. Ouch. Extreme Deep runs Saturday through January 11 at the Great Lakes Science Center (601 Erieside Avenue). It's open 9:30 a.m. to 5:30 p.m. daily. Admission is $7.95, $5.95 for kids. Call 216-694-2000 for more information. -- Michael Gallucci