Smoke and mirrors top the menu at a popular Kent eatery. 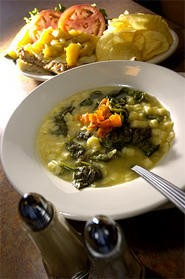 In the land of Subway, Starbucks, and Bob Evans, even a modest homegrown eatery like Kent's Wild Goats Café commands a large and loyal following.

Faint praise? Perhaps. But settled inside a former Friendly's, this locally owned breakfast-and-lunch spot has successfully duked it out with better-known chain-linked competitors for more than three years. On the other hand, we just can't help wishing owners Jan and Josh Grimm would forge a bolder vision. Greater creativity would be a good start; more focused flavors might make a fine follow-up.

It's not that the café's heart isn't in the right place. "Homemade" and "healthful" are the owners' watchwords, as they strive to serve a happily diverse populace that ranges from Kent State students to silver-haired seniors. And when Jan Grimm tells you her food is "just like Mom used to make," you can practically taste her sincerity.

But their menu is almost painfully mundane, rarely venturing beyond the predictable omelets, breakfast burritos, and BLTs. Novelty is kept to a minimum, flavors tend toward the bland, and while the spot does offer a few vegetarian options, the meat-free munchies play second fiddle to bacon, sausage gravy, and corned beef.

In fact, the vegetarian dishes well may be the kitchen's most underwhelming efforts. Take the peanut butter and banana french toast: Creamy peanut butter and sliced 'nanas spread onto thick but flabby slabs of lukewarm french toast wasn't exactly awful, but it certainly wasn't exciting. And the real disappointment came in seeing how easily it could have been improved: A scattering of toasted sunflower seeds or a dusting of chopped, dried apricots, and this Ugly Betty could have been a belle.

Sex appeal was the missing ingredient in an unimaginative veggie wrap too. It was undoubtedly wholesome: a chilly, unseasoned toss of finely diced tomato, onions, mushrooms, black olives, green peppers, and sprouts, moistened with a touch of tzatziki-like cucumber and sour cream sauce, then wrapped in a large flour tortilla. But yummy? Not really. Still, it was far better than The Goat, the café's signature open-face sandwich, featuring the same chopped veggies along with a bit of melted cheddar and a sheer smear of garlicky (but otherwise nondescript) hummus, piled onto a soggy pita. Beyond bland, the thing left behind a bitter, unpleasant taste, so persistent that even two cinnamon Altoids couldn't overrule it.

Far more appealing was the Tropical Chicken sandwich, a spot-on stackup of tender grilled chicken breast, provolone, and juicy mango and pineapple salsa, on thick slices of buttered and griddled flatbread, fresh from the Grimms' own oven. On the side, a choice of three undistinguished options: potato chips, potato salad, or flaccid coleslaw in a sweet-tart vinaigrette. According to Jan, the latter two sides are homemade, though our taste buds couldn't prove it. For an additional buck, we might have substituted a fresh fruit cup. But according to our mostly uninterested server, the kitchen was out of fruit this day, thereby eliminating both the side dish and a fruit-enhanced Bibb salad that had caught our eye.

In which case, it was on to the homemade soups. Buttery white beans and tender bits of chard attested to the slow-cooked origins of the day's vegetarian offering. And while we discovered only two bits of sausage in the potato-and-sausage variety, the flavors were comforting and reasonably complex. On the side, an ample multigrain roll made a thoughtful addition -- though we would have preferred another hunk of that homemade flatbread to this fluffy commercial product.

Besides the ho-hum french toast, all-day breakfast possibilities include quiche, various omelets, buttermilk pancakes, sausage gravy with biscuits, and homemade corned-beef hash. We never miss a chance to tuck into a new version of hash, but Wild Goats' rendition -- dominated by fried potatoes, with no more than a tablespoon or two of finely diced meat, and not even close to our RDA of salt, grease, and sassy, crisp-edged savor -- won't be joining our Top 10 list anytime soon.

Of course, breakfast grub demands a great cuppa joe, and here Wild Goats does not disappoint. Bold yet silken, the house java is a fresh-roasted custom blend from Caruso's Coffees of Brecksville. Poured steaming hot into a sturdy white mug, a tiny pitcher of real half-and-half at the ready, it's a concentrated jolt of get up and go.

Tea, spiced chai, and hot chocolate are other beverage options. Or try one of three fruit smoothies: berries, banana, and honey; protein powder, milk, and banana; and banana, pineapple, mango, OJ, and spirulina. A little less ice and a little more fruit would have upped their flavor ante, but overall they weren't bad.

And in any event, they were better than dessert -- which was nonexistent. "The owner hasn't had time to bake anything, what with the holidays and all," advised our server as he slapped down our tab. "But feel free to take a look in the bakery case on your way out."

It wasn't the response we'd hoped to hear, though it concluded the meal perfectly.