At a Warrensville mega-church, the Lord preaches prosperity. 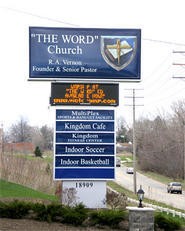 Inside the warehouse-sized chapel, music pounds as pastel lights illuminate a choir in full get-down-with-Jesus mode. They are young and polished, with enough lip gloss and passion to contend on American Idol.

I've had some problems, some great and some small. You being God delivered me from them all.

It's nearing 11 a.m. in Warrensville Heights, and the crowd at The Word Church keeps streaming in. From middle-aged moms with dyed, spiky hair to teenagers in sweatshirts and jeans, they sway, palms out, eyes closed, communing with the Lord.

"We're grateful that you would stop by this little bitty church in Warrensville," he says, the joke sending a murmur through the crowd. With 7,000 people regularly attending and sermons broadcast on BET and Channel 43, Vernon draws one of the largest Sunday audiences in the area. In the league of mega-churches, he is a rising star.

His dominion began seven years ago, when he was kicked out of Second Tabernacle Missionary Baptist in Mount Pleasant.

As Vernon tells it, his cutting-edge style didn't jibe with a congregation in its 50s and 60s. One Sunday, leaders locked him out. He sued, and court documents show dueling accusations over missing money. At one point, police had to forcibly remove Vernon from his office.

So the young pastor decided to start his own kingdom. He and about 100 followers began meeting at JFK High School. As the congregation grew, they moved to an old movie theater in Maple Heights.

By 2004, the church was again overflowing, and Vernon announced plans to buy the Metroplex in Warrensville Heights. Soon, the hub for hockey and soccer became the cornerstone of Word City.

It's all part of Vernon's strategy to ensure his faithful have no reason to leave. They can come straight from work to the gym, have a bite to eat, and attend a service, all in one place.

"I actually copy a lot from Disney World," he says.

Much like Disney, Vernon makes no apologies for his success. In his gospel, poverty is the work of the devil and economic empowerment an imperative.

On a recent Sunday morning, his first order of the day is tithing. You have to bring your own Bible, but collection envelopes are plentiful. The faithful pull out their slender checkbooks, heeding his call for a new bowling alley for the kids and a shelter for abused women.

"I'm not trying to get nothing from you. I'm trying to get something to you," Vernon exhorts. Then he tells them to stand up and wave their contributions in the air.

To Vernon, those checks are crucial to his followers' success. He urges them to get their finances in order, get an education, shun handouts, and ditch freeloading friends. When he tells women they don't need child support, because "I support myself," they stand up and cheer.

Old-guard black leaders have criticized mega-churches for abandoning the path of social justice in favor of Dr. Phil advice and dollar signs. But Vernon, who courts followers from the poorest pockets of the city, strikes a balance among all three.

He feeds the hungry, offers GED classes, and donates basketball jerseys to East Tech. Yet he also owns his own construction, music, and book companies.

He's "Mother Mary on one side and Donald Trump on the other side," says elder Larry Craig.

Vernon's recruiting efforts focus not on elderly church ladies, but on men, since he knows they'll bring their families. This winter he held a "Midnight Rumble" for thousands of them, featuring basketball, football, and PlayStation tournaments. Some winners got $2,500 prizes -- as long as they went to a church service.

Of course, there are questions about where all this holy money is going. If most parishioners are making $30,000 a year, they're bound to wonder about a pastor who recently sold a $390,000 house in Twinsburg, a friend acknowledges.

But the church has its own company to run the restaurant, fitness center, and soccer programs, Vernon says. His companies are run separately, providing a cushion so he doesn't have to live off collection plates. But since none of the financial records are public, it's hard to verify his claims.

Vernon says the church does an audit every year as well as an annual financial disclosure for the congregation. In the meantime, he counts on his followers' trust. "We keep everything clean to make sure that our integrity can't be questioned," he says.

His flock, in turn, protects him. Phone calls to three staffers, an e-mailed list of questions, and lengthy negotiations with a PR person were required just to secure a phone interview with the pastor. At one service, a reporter was stopped by two parishioners when she tried to take photos.

All of this is meant to shield Vernon from critics, who are jealous of the church's growth, friends say.

"His ministry, just like a McDonald's restaurant, is not for everyone," notes Bishop Eric Clark, whose Body of Christ Assembly is just around the corner.

Maybe that's why Sunday at The Word feels much like a well-organized concert. Attendants keep a close eye on the parking lot, and ushers lead parishioners to their seats, then hover throughout the service. There's no wandering in late to snatch a seat in the back, or ladies who linger to chat afterward. Thousands are waiting to take their place, so they're herded outside in a crush of bodies, as CDs are sold in the lobby.

Yet members don't seem to mind. As Vernon preaches, laughter and shouts of "Have mercy!" and "All right!" punctuate the air. They gaze so adoringly at the pastor, he sometimes has to remind them to look at their Bibles instead.

In him they see a man who speaks from the heart and promises something better than their crumbling city can offer.

"What you mean to me is more than life," they sing.