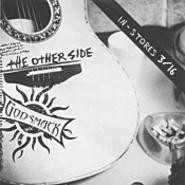 Faced with the choice between making lackluster original music and emulating a master band, Godsmack chose to play Alice in Chains cover songs. Studying Alice's moves, it grew into the one band from the hard-rock class of 1997 that may survive well into the next epoch. The Grammy winners are showing all the signs: supporting Metallica and recording three major-label albums -- each a radio smash, each platinum-plus, each heavier than the last. However, their latest, an unplugged EP called The Other Side, catches them at an awkward point in their development.

With last year's Faceless, the Boston band was primed to break the shackling comparisons to its northwestern role models. Now it's returned to Alice in Chains' style. A skeptic would cite the EP's title -- it's acoustic, and they're usually hard and heavy. Get it? -- as evidence that Godsmack is creatively challenged. Then he'd claim the disc is indistinguishable from Alice in Chains' chart-topping semi-unplugged EP, Jar of Flies. That's not exactly true -- Jar didn't have piano, and Godsmack's acoustic rendition of "Awake" ("Asleep" -- get it?) does. From a band whose sound is so rooted in tense electric reverb, the disc shouldn't work. But like Alice's MTV Unplugged, it does -- it's a chill-out album, not a crusher.

The same could be said of The String Quartet Tribute to Godsmack, albeit to opposite results. Here, the Tallywood Strings strip the songs of everything that makes them extraordinary, highlighting weaknesses that were never obvious before. Translated directly into strings, undeniable bruisers such as "Straight Out of Line" sound like faint imitations of middling Metallica ("Wherever I May Roam" comes immediately to mind). Tallywood's few acts of interpretation are questionable at best: It doesn't take Yo-Yo Ma to realize that a line like "I fucking hate you/You're such a liar" is surely meant for the cello, not violin.

Groundbreaking or no, Godsmack's new work is an immaculately crafted take on Alice's much-missed designs. The string quartet's anonymous adaptations underscore how solid the originals are.