The actors of Urinetown always mind their pees and cues. 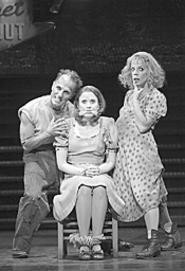 Urinetown: The Musical is probably the worst-titled production ever to hit Broadway. It's most certainly the nastiest-named show ever to win multiple Tony Awards. "It knows the title sucks and the premise is absurd," admits Tom Hewitt, who plays Officer Lockstock in the touring production that opens at the Palace Theatre on Tuesday. "It lets people off the hook right away and says, 'Let's just get on with the show.'"

Urinetown, Hewitt declares, is just a simple story about two kids who fall in love in the middle of a water shortage -- which has lasted 20 years. Citizens have to use community facilities owned by a private organization. "You have to pay to pee," he explains. Anyone caught tinkling in public is carted off to the titular burg, "from which there is no return." Urinetown is a message play without a message. "There is one there," Hewitt says. "We're just not sure what it is."

Along the way, Broadway traditions are tweaked and ridiculed -- figuratively pissed on. "We call it the thorn in Broadway's side," Hewitt says. "The context of the show is very loose and broad-ranging. It really sort of tests the edge of what's appropriate behavior onstage. I get to do some incredibly bizarre things up there."

Hewitt's Officer Lockstock (his partner's name is Barrel, natch) doubles as Urinetown's narrator, occasionally interrupting the action to fill the audience in on the proceedings. He's aided by Little Sally, the street urchin. "She'll stop the show and ask, 'What's happening, Officer Lockstock?'" Hewitt explains. "And I'll tell her, 'Why, it's the Act I finale, Little Sally.' And then I explain the dynamics of the Act I finale.

If there's a note of inspiration to be found (and Hewitt insists there is), there's also a rousing, Tony-winning score by Greg Kotis and Mark Hollman, which includes such ditties as "It's a Privilege to Pee," "Don't Be the Bunny," and "Snuff That Girl." "It covers just about every genre you can imagine, from gospel, rock, and rap to standard anthems and jazzy West Side Story-type numbers," Hewitt says.

Still, anything called Urinetown is gonna be a tough sell -- even armed with all those awards. "If people can just set aside their puritanical sensibilities for an instant and just get past the title, it's a great time. It's not really about the plot. The show has an attitude about itself. It's very self-aware, and it lets the audience know that. It lightens up other genres and theatrical conventions that are held precious."