While Cleveland axes hundreds of teachers, "retired" administrators rake it in. 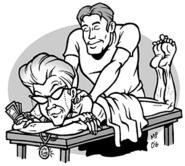 The mood at Cleveland schools last spring was dire. Buildings were closing. Hundreds of teachers were getting pink slips. Politicians were wringing their hands over another doomed tax levy.

It was a familiar refrain: Unless residents ponied up once again, PTA moms would have to sell their kidneys to pay for textbooks.

Yet one longtime principal escaped the pain. James Balotta of Robert Jamison School on the East Side was gearing up for a promotion and a raise.

The move didn't even raise eyebrows downtown. Balotta was just taking advantage of a loophole any public servant would find tough to resist.

Most people think of retirement as the end of their career -- or at least as an excuse to start a new one. But in Ohio schools, it can be nothing more than a summer vacation. Public-school teachers and administrators retire, begin collecting their pensions, and then come back to the same job two months later.

The loophole was created in 2000, when newspapers reported a flood of teachers and administrators retiring across the state. So lawmakers passed a new rule, allowing educators to retire and come back to their jobs two months later. It also enticed them to stay longer by promising a pension equal to 88.5 percent of their highest average salary, if they spent 35 years on the job.

The move essentially allows people to double their old salary -- at a time when many districts are fiscally hemorrhaging.

At least 36 Cleveland retirees have come back to work. Three are top administrators, earning salary/pension combos of up to $187,000 a year. District officials say that they're dedicated educators and insist that their experience is worth more than dollars and cents.

But in a broke city, their six-digit paychecks make them look like Enron execs.

Cleveland isn't the only district paying retired administrators to stay. Toledo, Dayton, and South Euclid-Lyndhurst have all made headlines for the practice.

But statewide, most people are not milking the system. About 70 percent of the 13,366 retired Ohio educators who worked during the last fiscal year earned less than $20,000, says Laura Ecklar of the State Teachers Retirement System of Ohio. That means they were probably substitutes, or only working on special projects, she says.

Cleveland, however, has at least 15 retirees still working full-time. Some are math, science, and special-ed teachers -- all specialties in high demand.

But two others are retired gym teachers -- where there's not exactly a shortage of candidates -- earning $64,100 and $57,300 a year, plus pensions and health benefits. A third is a middle-school teacher who earns $67,100 on top of his pension.

The real money-makers, however, are the administrators.

Superintendents Balotta and Richard Larrabee -- whose pension and salary combo tops $187,000 -- are responsible for supervising groups of schools. Ed Dietsche is primarily in charge of scheduling and curriculum. He earns a pension/salary combo of roughly $144,000 a year.

District officials insist all three are worth the money. Their experience adds up to an "incredible value," says interim CEO Lisa Ruda. "As long as they're doing what we've hired them to do, they're earning what somebody else in that position would earn."

But there is some debate as to whether these men hurt or help Cleveland taxpayers.

Alan Seifullah, the district's communications chief, argues that there is an "overall" savings to the district, because the majority of the retirees are not collecting health benefits from Cleveland. But he neglects to mention that taxpayers help foot the bill for both state and local health plans.

Larrabee points out that his salary is $10,000 less than when he retired in 2003, and he's paying for his own health care. As for his pension, he argues that he's only collecting on the investment he worked 35 years to earn.

"It's my money I'm pulling out right now," he says. "It's not like I'm double-dipping."

But that's not entirely true either. Over his career, Larrabee contributed 10 percent of his paycheck to the retirement system every year, but the district -- that's you, dear taxpayer -- gave 14 percent of its teacher payroll. The rest comes from investments.

It's this public contribution -- Clevelanders paying for both a salary and pension-- that makes critics cringe.

"Conceptually, I don't agree with it," says Joanne DeMarco, president of the teachers union. "Practically, it works."

She says the district needs to develop a "farm team" of younger educators trained to take over the top jobs, instead of relying on retirees. District officials would also prefer to hire younger administrators, but qualified candidates are not "readily available," Ruda says. And by the time they're trained, they'll be old enough to retire anyway.

It's an interesting perspective, coming from a 37-year-old former lawyer who, in less than a decade, worked her way up to the district's top job. It also testifies to the district's legacy of dysfunction. Though organizations of all stripes find new leaders to replace the old, Cleveland schools, with about 5,300 staff members, can't seem to train them.

Other cities have discovered that paying double to keep retirees isn't the only option. Jim Hayas, retiring superintendent of Brunswick schools, recently announced that he wants no more than $25,000 a year if he's rehired.

Hayas explains that he grew up in Brunswick, got his first teaching job there, and worked his way up the ladder. He wants to give something back to his hometown. Besides, he doesn't need the money. His kids are grown, his house is paid for, and his pension check should be somewhere around $91,000 a year. Even by taking a salary of $25,000, he'd still be getting a raise.

"It's not a case of my losing money," Hayas explains. "It's more a case of not trying to make a whole lot more."