Gone in a Flash

For a moment, football was big at Kent State. Where did everyone go? 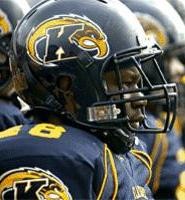 There was a moment, back in October, when Dix Stadium was more than just a dead slab of concrete rising from a barren field. It was an actual football stadium. Students in navy and gold face paint waddled through hordes of classmates, drunk and happy. Alumni huddled around tailgates, toasting their alma mater's high-powered offense and speedy defense. For the first time in years, there was traffic outside and lines for the bathroom inside.

The Golden Flashes were winners, and the bandwagon was nearing capacity.

The Flashes won that day, beating Toledo and pushing their unprecedented winning streak to five. The crowds streamed out feeling blessed: Kent State finally had itself a football team.

But just a month later, with his team still in contention for a bowl game, coach Doug Martin found himself bemoaning a shiny mass of empty bleachers. "We had a great group of seniors that left tonight," he said stoically after the Flashes' final home game, a win over Eastern Michigan. "It's a shame there wasn't a bigger crowd out there to say goodbye."

Kent is the second-biggest university in a state clinically addicted to football. But the Flashes have long been more nuisance than tradition. Entering this season, they had been winners only once since 1987 and owned just one conference title in the last 50 years.

Northeast Ohio has ignored them in return, and Kent's attendance has ranked among the worst in the country. The empty seats mean more than just waning revenue and inspiration. In 2004, the NCAA mandated that all major programs sell at least 15,000 tickets per game or risk losing their Division I status.

Kent hired Martin in 2004 to rebuild. A genial southerner who led high-powered offenses at East Carolina University, Martin has improved the team's conditioning programs, upgraded facilities, and attracted stronger recruits, Athletic Director Laing Kennedy says. But the Flashes continued to lose. They bottomed out last year, going 1-10, and the team's 6,658 average attendance was the second-worst in all of Division I.

The school responded by launching a $150,000 campaign to sell tickets and upgrade Dix, targeting the college football fans who can't afford the Ohio State experience. But mostly, Kennedy says, they targeted students, constructing Tailgate Alley, with a riding bull, live music, and other interactive adventures.

But it was a simpler, time-tested sales pitch that actually put butts in the seats: cheap beer and good football. For the first time, the school sold booze outside the stadium, and it was priced to move at a buck a beer. The Flashes also began selling watchable football. They opened against Minnesota, a rare appearance by a Big Ten team on MAC turf. The Flashes got hammered, but kept things interesting for a half. Then they went on the road and notched two conference wins, including a 38-3 blowout in Bowling Green, where Kent hadn't won since 1972.

By the time they returned for their second home game, word had trickled to campus that quarterback Julian Edelman possessed Josh Cribbs-like mobility and grit. Pint-sized running back Eugene Jarvis could fit through any hole on the field. And the defense could fly.

Wade Kratzer, a sports nut from Pennsylvania, came to Kent last year for its engineering program. He invested in blue and gold attire and started migrating from his freshman dorm to Dix, sitting through every home game. "It was basically me and, like, two other guys," he says of the crowds. But this year, Kratzer found himself cheerleading a full student section as Kent drubbed Akron and Toledo.

"Our students were unbelievable," Martin says. "The community was really getting behind us."

But if scheduling luck helped the Flashes early, bad timing -- and bad football -- killed their momentum late. They had a two-week layoff before their next game, at home against Ohio. Kent was undefeated in the MAC and riding a five-game winning streak; Ohio had just one conference loss. At a football school, two weeks off would have meant two weeks of buildup.

But the game fell on the Saturday before Halloween, a Holy Day at both universities, marked by ceremonial binge drinking and breaking things, not football. To make matters worse, snow was blowing sideways that day at Dix. Tailgate Alley, where students were shoulder-to-shoulder a few weeks earlier, was empty. Inside, Kratzer and just a few dozen students huddled in the sleet as the Flashes, the MAC's highest-scoring team entering the game, lost 17-7.

The defeat sent them sputtering. By the final home game against Eastern Michigan, their goal had taken a turn to the modest: pursuit of a winning season. While that in itself would be a milestone for Kent, the fans didn't see it that way. On a cold but calm Friday night, hardly anyone pushed through the turnstiles, and the stadium was silent.

In his box overlooking the field, Kennedy maintained a cheery disposition despite the obvious collapse in support. There weren't more than 2,500 people in the stands, but the university had pre-sold 9,000 tickets, enough to beat the NCAA-mandated 15,000 season average. And by Kent's standards, the year was a success. "Having the opportunity to finish our season 7-5 and be bowl eligible, that's exciting for us," he says. "We haven't had that in a while."

It'll be a while longer: The Flashes lost their season finale and closed the season at 6-6. But for Martin, even that was an accomplishment.

"Getting that win to where you assure yourself of not having a losing season is huge, and it's the hardest one to get," he says. "It's that unbreakable door you've gotta knock down, and man, we've been chasing it for three years."

But he also realizes it will take more than dollar beers and a few wins to win over Kent, a place where bleachers can be emptied for the slightest cause. "The same thing happened to them that kind of happened to our football team after we lost to Ohio," he says. "The emotions left, and the air came out of our balloon. That's the next thing we've gotta learn how to handle here: You have to rebound from a loss. They can't give up just because we lose one game. They have to understand that they have to rebound with us. Winning is a learning process for them too."