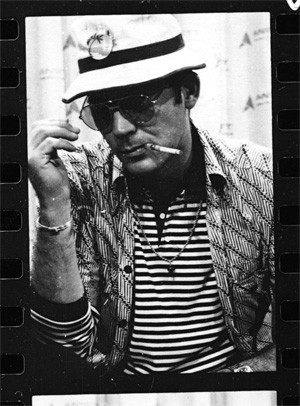 "In a nation of frightened dullards, there is always a sorry shortage of outlaws, and those few who make the grade are always welcome." So wrote Hunter S. Thompson of the Hells Angels after riding with California's motor-psycho Mongol hordes in the mid-1960s, a feat of embedded journalism that left him mauled, marked, and famous. But the sentence's true subject — as with so much of what Thompson wrote in the years after his nervy, electric Angels book — is its author.

Alex Gibney's Gonzo: The Life and Work of Dr. Hunter S. Thompson makes the familiar case that Thompson's notoriety eventually capsized his career, well before his long-foretold suicide in 2005. Over a quick scan of Thompson's personal effects (whiskey bottles, a note that cautions "Never call 911!"), unseen jurors hand down the verdict: "He'd lost that gonzo edge . . . I think he'd just run out of juice . . ." But while the evidence of his spotty post-1970s work is hard to refute, Gonzo proves what a vapid, overvalued commodity edginess is, championing Thompson's best work for its brass-tacks insight more than its brass-balled outrage.

"The edge . . . There is no honest way to explain it, because the only people who really know where it is are the ones who have gone over." Like the rest of the movie's narration, the words are Thompson's, read by Johnny Depp in the voice he mastered for Terry Gilliam's movie version of Fear and Loathing in Las Vegas: a clenched murmur through grinding teeth. Thompson's authorial voice had a hard-boiled Beat-poet sprawl — Howl by way of Hemingway — which became more pronounced over the years, especially once (like the drugs outside of Barstow) the concept of "gonzo" began to take hold.

Gonzo! Coined to describe Thompson's anarchic means of toppling the inverted pyramid, the term even comes first in the movie's title. Yet, as friend and biographer Douglas Brinkley tells the camera, the book that made Thompson's outlaw rep, Hell's Angels, was "not gonzo, just participatory." At the time, Thompson wasn't far removed from being the Fitzgerald acolyte who typed The Great Gatsby to study its sentence flow. Nor was he far financially from the freelancing days when, to feed his pregnant first wife, he hunted and gathered elk liver.

That would all change for the better, at least for a few years. Buttressed by interviews (including illustrator Ralph Steadman) and documentary footage that make the author a complex, looming presence, the bulk of Gibney's film is devoted to just three books: Hell's Angels, Fear and Loathing in Las Vegas, and his last major work, Fear and Loathing on the Campaign Trail '72 — a trilogy in which Thompson wrote the epitaph for '60s idealism in psychedelic hyperbole and lightning-strike invective. By ditching the drone of journalistic objectivity for a sharp new voice — strung-out, cynical, relentlessly self-aware — Thompson pioneered what might be called psychic-war correspondence.

Within the stylistic fireworks, Gibney locates the heart of the books: Las Vegas' piercing elegy for the moment the Flower Power wave began to wash back; Campaign Trail's savage but sage assessments of George McGovern, the hated Ed Muskie and Hubert Humphrey, and Thompson's bête noire, Tricky Dick. The director boldfaces Thompson's still-pertinent rationale for gonzo style as duty, not distraction: "It was the built-in blind spots of the objective rules and dogma that allowed Nixon to slither into the White House." Remove Nixon from that sentence, and fill in the blank.

But Gonzo is just as clear-eyed about Thompson's limits and contradictions. A tightly wound bundle of everything and its opposite — an anti-authoritarian who ran for sheriff of Aspen, a peace-loving gun nut, an iconoclast who relished winners as much as any football coach — Thompson was capable of chiding the Washington press corps for "gross cynicism" about McGovern, then turning on the hapless candidate when blood was in the water. More illuminating than McGovern campaign manager Gary Hart's acid assessment of Thompson's oddly romantic worldview — a black-and-white arena where politics is "all fun, all amusing, all good-and-evil overdramatizing" — is Pat Buchanan's fond remembrance.

Still, shooting in the snarky vein of his Enron: The Smartest Guys in the Room rather than the cold fury of his Oscar-winning Taxi to the Dark Side, director Gibney relies too often on glib simplification. He offers up a vague anecdote about Thompson's early run-in with the Louisville police as if it were some sort of defining Rosebud, while skimming the last 25 years of Thompson's life in about 20 minutes of screen time.

The brightest of Gibney's archival finds is an ancient episode of To Tell the Truth, on which "the real Hunter Thompson" is asked to stand up. For surreal hilarity, nothing in the movie rivals dowager panelists Peggy Cass and Kitty Carlisle grilling their hunched-over guest about Ken Kesey and the Merry Pranksters. It's a clever way to convey Thompson's growing cult of personality and the ultimate emptiness of the celebrity gathering around him. By refocusing attention on Thompson's blazing gift — however unevenly it burned — Gonzo reclaims him from the fate he described for the Angels: "The mystique was stretched so thin it finally became transparent."