Junior Brown lived to tell about his Hazzardous experience.

by Michael Gallucci and P.F. Wilson 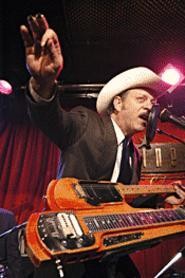 Junior Brown spent time earlier this year in the recording studio, adding his rich baritone to the summer flick The Dukes of Hazzard. The twangy singer-songwriter serves as the movie's narrator, even though he's never seen onscreen. Moreover, he didn't get to spend much time with Hazzard star Johnny Knoxville. So, there was little opportunity for Brown and the onetime Jackass to slap each other in the balls between takes. "There was none of that," laughs Brown. "I went in, and they just told me what to say." His Hollywood adventure behind him, Brown's back on the road, playing Texas-seasoned honky-tonk music just like that found on his latest CD, Live at the Continental Club -- The Austin Experience. "I've wanted to do a live record for years," he says. "In the studio, you lose that spontaneity of being ready to go." Brown plays the Beachland Ballroom (15711 Waterloo Road) at 8 p.m. Friday. Tickets are $20; call 216-383-1124. -- Michael Gallucci

Two for the Show

It's been 20 years since John Joseph was first lured to the comedy club across the street from the piano bar where he was performing. He was playing funny songs that made people laugh and figured being a comedian would be a better full-time gig than being a struggling musician. In 1993, he met fellow comic and piano player Johnny B., and a team was born. "We basically became like Jerry Lewis and Dean Martin with instruments," says Joseph. The pair banters, does some stand-up, and sings songs. "[Audiences] see a bunch of different shows in one show," says Joseph. "We call it a one-man show with two guys." John Joseph and Johnny B. perform at Pickwick & Frolic's Hilarities 4th Street Theatre (2035 East Fourth Street) Thursday through Sunday. Show times are 8 p.m. Thursday, 7:30 and 10:15 p.m. Friday and Saturday, and 7:30 p.m. Sunday. Tickets are $10 to $13; call 216-241-7425. -- P.F. Wilson

In a world where Weezer drops the smarm and Rod Stewart sings songs that Grandma liked, veteran metalhead guitarist Yngwie Malmsteen (who still has hair and a leather suit straight outta 1987) refuses to change. His latest opus, Unleash the Fury, comes packed with axe-shredding tunes like "Cracking the Whip," "Crown of Thorns," and "Magic and Mayhem." And yes, each fret-smokin' song delivers exactly what its title implies. Malmsteen plays at the Odeon (1295 Old River Road) at 9 p.m. Friday. Tickets are $25; call 216-241-5555. -- Michael Gallucci