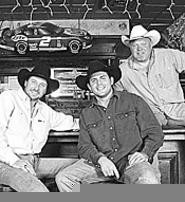 Chad Brock is the newest member of the two-year-old Honky-Tonk Tailgate Party, but he's quickly learned the rules of the road. "This is a hell-raiser tour," says the 40-year-old country singer. "You can tell we're having fun."

The Tailgate Party was launched in February 2001 by hitmakers Rhett Akins, Daryle Singletary, and Jeff Carson. Then Carson left last year. Then Brock joined this year. Now Singletary's getting married this weekend, so Carson's coming back. Got that? Doesn't matter. According to Brock -- whose biggest single is 1998's "Ordinary Life" -- the guys ("Our wives wouldn't let us bring any women along") find ways to complement each other, no matter the combination. "I'm a traditionalist, Jeff's a great singer, and Rhett is a Southern rock guy," he says. "But we're driven by the songs, not the style."

No Will
The Shakespeare Festival blows off the Bard.

Why exactly is the Shakespeare Festival staging Oh Coward!, a musical revue that pays tribute to songwriter Noël Coward? "We didn't want to do a huge musical with a lot of demand," artistic director Nancy Cates sort of explains. "This is manageable, after [our production of] The Tempest." Anecdotes and sketches fill in the spaces between some of Coward's most popular songs -- so it's kinda like a play. "Coward's one of the definers of the sound of the 20th century," Cates says. "He's so musical and so theatrical and so witty and so entertaining." Oh Coward! runs 8 p.m. Thursday through Sunday at Stan Hywet Hall & Gardens (714 North Portage Path in Akron). Tickets range from $6 to $16. Call 330-836-5533 for more information. -- Michael Gallucci