The darting world converges on Cleveland for the 31st annual championships. 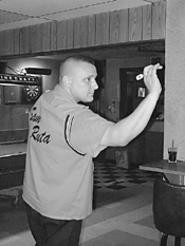 Sharp objects and beer usually aren't recommended in tandem. But for the Cleveland Darter Club, it's business as usual.

And it's a reason why Scott Madis, the group's president, says he and his sport are frequently frowned upon. "It's not high-profile," he explains. "It has the stigma of being played in a bar."

The Cleveland Dart Extravaganza XXXI, happening this weekend in Cleveland, gathers some of the world's best darters, all vying for $30,000 in prize money. Among them is Sam Ruta, a 10-year tournament veteran from Newburgh Heights. He agrees that darters fight an uphill battle to earn respect. For one thing, they get no love from ESPN. "Once in a while, you'll catch a tournament from England at four in the morning," he moans.

Darting is good for local bars, Madis claims, underlining one of the sport's gentlemanly aspects: "All of our games begin and end with a handshake. It's an unwritten rule."

More important, dart leagues are profitable for bars, because darters spend little money on the game itself -- and plenty on bar fare. "We're just a cheap sport," Madis says. "There's nothing that even comes close, short of pinball."

While inexpensive for the novice, serious tournament darters spend up to $80 for a three-pack of darts -- little graphite arrows with menacing names like Devastator and Black Widow. Some darters take on cool nicknames: Ruta is known to buddies as "Southside."

Local bars typically bankroll the most competitive darters when they travel to tournaments throughout the country. Ruta's sponsor is Knuckleheads on Brookpark Road. Owner Frank Cimperman says the worst collateral damage his business suffers is "a few holes in the wall."

Ultimately, Ruta -- who has a dartboard at home and at work, and practices an hour every day -- says, darting "is about getting together with the guys for a night out." And this weekend, it's about bull's-eyes and cash cows.