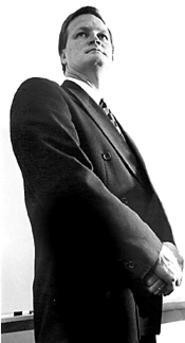 The priest was shipped out of Cleveland without fanfare. One minute he was facing allegations that he'd raped a young male parishioner. The next, he was gone.

There may have been other stops along the way, but this much is certain: After fielding the accusation, the Cleveland diocese sent Father Joseph Lang to Connecticut's Institute for Living for psychiatric treatment, according to a former diocesan official. In 1988, he was loaned to a diocese in remote British Columbia. There he stayed for 14 quiet years.

Even Bishop Gerald Wiesner, appointed five years after Lang's arrival in British Columbia, didn't know of his past, according to a source in Wiesner's office. And Lang's old congregation, East Cleveland's St. Philomena, was never told the reason for his departure, according to the diocesan official.

Until last April. That's when Cuyahoga County Prosecutor Bill Mason opened an investigation into sexual abuse cases in the Cleveland diocese. Only then, so many years after the boy's parents first confronted church leaders, was Lang suspended, outed as a suspected abuser along with 14 other priests.

(According to the source in Wiesner's office, Lang has left British Columbia. He could not be reached for comment. Bob Tayek, spokesman for the Cleveland diocese, declined comment on the specifics of the Lang case.)

Insiders believe the case against Lang might be one of the strongest Mason had. The former official says the diocese knew that, while in Connecticut, Lang had admitted to the incident.

But even an admission of guilt isn't always enough. Prior to a change in 1999, Ohio law required sexual abuse to be prosecuted within six years of the victim turning 18 or reporting the abuse to a teacher or counselor.

Since almost all the allegations against local priests came before the 1999 revision, Mason's office was circumscribed by that narrow window of time. Prosecutors would eventually discard 484 abuse allegations because they were too old.

But Lang's quiet move to Canada seemed to trigger a legal loophole: If an accused person moves out of state, many states freeze the clock on the statute of limitations. Prosecutors in Boston and Detroit successfully used that very loophole to resurrect decades-old cases against abusive priests -- and win convictions.

While Ohio's law is not so clear-cut, it does provide for such a freeze. Jeffrey Anderson, a St. Paul attorney who's made a career of suing Catholic dioceses across the country, says Mason could have used it.

Timothy B. Miller, Mason's criminal-division chief, describes the quest to sort old abuse allegations as a trip through Detail Hell. Thanks to the diocese's files and phone calls from self-described victims across the country, prosecutors eventually cataloged 1,019 claims of abuse against priests and church leaders in the eight-county diocese.

For each victim they talked to, prosecutors compiled a four-page dossier, much of it focused on the statute of limitations, Miller says. How old was the child during the abuse? When was it first reported? Did the child repress memories? Each answer could invoke a different part of Ohio's law.

Then there were the accused priests. Did they leave the state? If so, when? "We did a time calculation on each complaint," Miller says. "The focus from the beginning was to be as thorough and complete as possible, so there would be no doubts later on."

At first the probe seemed bound to lead to indictments. At its inception, the diocese put 15 priests on administrative leave and named 12 retirees as potential abusers. The list didn't include every priest who'd ever been accused of misconduct, but rather "those where we had sufficient evidence that sexual abuse of a minor may have occurred," says Tayek.

Some had already copped to criminal charges. Others -- at least half of those on the list, according to the former diocesan official -- had admitted the abuse to church leaders.

Then there was Father Joseph Lieberth. According to a suit filed last year, Lieberth took a 17-year-old parishioner on a trip west in 1986. His effort to rape the boy, says the suit, was "thwarted only by [his] premature ejaculation." The victim, who asked not to be identified, says Lieberth later apologized to him. But Auxiliary Bishop Anthony Quinn urged the victim not to take legal action, so he didn't; only last year did the victim learn that another boy was similarly attacked in 1985, according to the suit.

But no matter how ugly the stories -- and how many prosecutors heard -- Miller says there was little they could do. Almost every allegation was too old for Ohio law.

When Mason closed his investigation last month, one retired priest, Daniel McBride, was charged with compelling and promoting prostitution for allegedly meeting a boy in a bar and taking him to New York for sex. A few workers at a Catholic-run center for troubled teens were also charged. That was it.

"As Bishop Pilla himself said, even one accused is too many," Tayek says. "But we can take some comfort that no one currently in active ministry was charged."

Still, it doesn't mean the others were cleared. Prosecutors say they investigated 145 priests and cleared only 7. The rest couldn't be prosecuted.

Most of the allegations, Miller says, predated the 1990s. Even more heartbreaking, some victims had told "mandatory reporters" like teachers, who failed to make a report.

But what about the priests who skipped the state? The statute of limitations, Ohio law says, is frozen if the defendant "purposefully avoids prosecution." The law offers two examples: if the accused conceals his identity or leaves the state.

Lang wasn't the only priest to leave Ohio. Father F. James Mulica, accused of abusing a boy in Kirtland, eventually moved to California and was licensed as an insurance agent before heading to Arizona and starting a dream-analysis company.

Father Gary Berthiaume, who came to Cleveland in 1978 already on probation for molesting a boy, fled to Illinois 10 years later, after his history became public -- but not before allegedly abusing more boys at a Cleveland elementary school, according to a 2000 lawsuit.

But Miller says Ohio's statute is so specific that simply leaving the state doesn't freeze the window for prosecution. "It only works if the prosecutor can prove they left purposefully, to avoid prosecution," he says. "If they just got transferred or moved, that's different." Berthiaume, who was made chaplain at a Catholic retreat center, could argue that he left Ohio as a business move, for example.

Cincinnati lawyer Felix Gora agrees that the "purposefully" provision is key. "You've got to do more than show they left."

An aggressive prosecutor, Anderson says, could easily make the case that the diocese moved accused priests out of state to diminish the heat. "You've got a pattern of fraudulent concealment. And that tolls the statute of limitations."

Consider Lang. The diocesan source is convinced the priest's move to Canada was no coincidence. Arguing that the diocese moved him to avoid repercussions isn't much of a stretch.

When questioned on the details of Lang's case, Miller said he wasn't familiar with it and would have to talk to the prosecutor involved. When he called back days later, he said the allegation had been reported to Children and Family Services in 1987. "The civil authorities were given the information to go ahead and prosecute it," he says. "I don't think the fact that he got transferred is what prevented it."

Adds Assistant Prosecutor Frankie Goldberg: "Nothing indicated he had changed his name or was in hiding."

Barbara Blaine, president of the Survivor's Network for Those Abused by Priests, believes it was the prosecutor's duty to at least attempt an indictment. "If [Mason] knew there was a loophole and didn't take advantage of it, it has to make you wonder," she says. "Isn't he Catholic? Doesn't that create somewhat a conflict of interest?"

Using a priest's departure to freeze time limits isn't unprecedented. Massachusetts priest James Porter was accused of molesting dozens of children before heading to Minnesota in 1967. In 1993, Bristol County prosecutors filed a 46-count indictment against him, arguing the statute of limitations froze when he fled.

Like Lang, Porter didn't try hard to hide. So Porter's attorney challenged the provision as unconstitutional. But Massachusetts's law freezes the statute of limitations any time a defendant moves out of state -- not just in cases of concealment. The law withstood the challenge. Porter pleaded guilty to 41 counts.

More recently, former priests Edward Olszewski and Jason Sigler were sentenced in Michigan for molesting kids in the 1960s and '70s. Sigler had been transferred to New Mexico, Olszewski to Florida.

Miller notes that Michigan's law is invoked much more readily than Ohio's. There's no "purposefully" provision, only the issue of whether the accused left the state.

And he insists that Cuyahoga County prosecutors unearthed nothing like the ugliness their counterparts found in Boston. Cleveland's priests, he said, were not reassigned to places where they could strike again.

Since 1989, the diocese has had a strict procedure in place for dealing with abuse allegations, one that keeps accused abusers from serving near children, says Tayek.

"Pilla went forward and addressed this," Miller said. "That's why you didn't see people re-offending in this diocese."

Blaine disagrees. "In Cleveland, in Toledo, it's all the same. It's not any different than you had in Boston," she says.

"Boston is just an example of what's happening elsewhere," Anderson concurs. "The only difference in Cleveland is that there hasn't been as aggressive an initiative by the civil lawyers, the media, and prosecutors."

After all, prior to 1989, alleged abusers were given new assignments where they could have contact with children. Some stayed in those places for years: Lieberth led Holy Family Catholic Church in Stow for close to a decade before being placed on leave in April. And Lang was the only priest in tiny Terrace, British Columbia, with his own bishop unaware that he'd once been accused of rape.

Neither has been accused of recent misconduct. Blaine still wonders. "These child molesters don't stop," she says. She believes abuse victims from the '90s will eventually surface from Cleveland-area parishes. At this point, she says, they're just too young and too wounded to come forward. "It's only a matter of time."