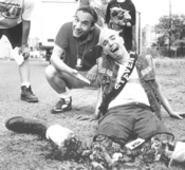 To schlock film fans, a Troma production means two things: tits and gore. To Troma co-founder and auteur Lloyd Kaufman, his films mean something else: an artistic statement made with 100 percent freedom -- and tits and gore.

"Whether or not what I do is high art, it has opened doors for others to go through," says Kaufman, who will be in town this weekend to promote his latest film, Terror Firmer. Without Troma -- most famous for 1985's The Toxic Avenger -- he claims there would be no South Park or There's Something About Mary. "Younger people can look at these movies and have fun; older people take it literally."

More telling is that the director -- portrayed by Kaufman himself -- is blind, oblivious to the low-budget special effects and growing body count on his set. "I think a good director has to be blind to his strengths or failings," says Kaufman. "He's blind, so he's not looking at whether he's great or minuscule in terms of his art. He should just do what's in his heart."

This raises the question of what, exactly, is in Kaufman's heart. When he attended Yale in the late 1960s, it was not to become a filmmaker. "I was intending to be a social worker or teacher. Do something useful: Teach people with hooks for hands to fingerpaint." But the roommate lottery landed him with a "film nut" who nourished him on John Ford, Charlie Chaplin, and Frank Capra -- filmmakers he says still inspire him. Which doesn't really explain the gratuitous sex and violence.

"What's gratuitous?" Kaufman wonders. "Most of the violence in our movies is like cartoons. Does anyone really believe the funnel is shoved up the guy's chunky starfish? You have to be intelligent to get our movies. There's a lot going on in there."

And while American critics and mainstream audiences may not get it, Kaufman has received praise from both the British and American film institutes, and at last year's Cannes Film Festival he was compared to French artist Marcel Duchamp, who hung a urinal on the wall in 1917 ("Fountain"), making the point that art doesn't please so much as it evokes an emotional response.