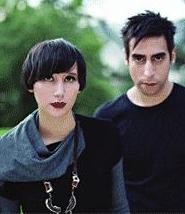 Karen O is laughing. It's a throaty sound, but light, even melodious -- not far removed from the slyly unpredictable, declamatory style that has helped transform the former Karen Lee Orzolek into, if not a household name, at least an alt-rock goddess in her role as the leggy fashion plate fronting the Yeah Yeah Yeahs, New York-bred indie rockers who have become international rock emissaries.

Okay then, what's so funny? More to the point, how does one go about making Karen O, the iconically bob-tressed post-feminist-role-model-cum-nerdboy-wank-fantasy, like, laugh? Well, it turns out it's a matter of grammar. During a brief phone call to her L.A. digs, this interviewer couldn't prevent himself from respectfully pointing out that in the chorus of the super-catchy rocker "Phenomena" (track four on the band's sophomore disc, Show Your Bones), Ms. O repeatedly misuses the titular word. See, the endlessly chanted line in question, "I'm something like a phenomena," incorrectly employs the plural form, resulting in what is perhaps one of the more egregious usage errors in modern music. Especially bad, considering that the line is a well-known hip-hop cliché that's been passed around for decades by artists from Grandmaster Melle Mel to De La Soul to LL Cool J to Fabolous -- all of whom, needless to say, got it right.

While this is undoubtedly a stirring cautionary tale of what can happen when a young songwriter surrounds herself with rock and roll lifers and/or grammatical yes-men (yeah yeah yeah-men?), such niggling concerns are obviously far from our heroine's mind. After the platinum success of her band's Grammy-nominated debut, Fever to Tell, expectations leading up to the release of Show Your Bones became absurdly inflated. After a brief period of totally baseless pre-release backlash, the new record finally won acknowledgment as a major growth spurt for the Yeah Yeah Yeahs, displaying an increased sonic palette and more sophisticated arrangements, as well as a noticeably wider vocal range on Karen's part. Disc opener "Gold Lion" is sheer, catchy power-pop, while "Honeybear" starts off like an acoustic reimagining of Donna Summer-style disco before seamlessly morphing into something else entirely.

This is all a far cry from the minimalist dynamic of the group's early live performances. (In line with the current norm in the post-White Stripes alterna-world, the Yeah Yeah Yeahs never even had a bass player, just guitarist Nick Zinner, drummer Brian Chase, and our Karen.) These days, the band is joined by multi-instrumentalist Imaad Wasif, a respected indie solo artist in his own right, who helps recreate the new recordings more faithfully. Throughout the record, Karen's in-your-face voice and occasionally abstract lyrics manage to unite the disparate sounds into a coherent whole. She's definitely in control here.

Speaking of control, another big difference between the Fever to Tell-era Yeah Yeah Yeahs and the current state of the band is that back in the day, one was just as likely to read a story about Karen's nearly Iggy Pop-like penchant for onstage flip-outs and resultant injuries as anything about the band's music itself. In recent months, these incidents seem to have decreased dramatically, if not completely dried up.

"Well, yeah," says Karen. "I mean, I've learned how to get audiences to respond to really small gestures. Which is great, because it's nice to not have to run headfirst into the wall every night."

When it's suggested that her new performance style sounds reminiscent of the late Elvis Presley, once known for his uncanny ability to drive full auditoriums into states of hysteria with the single flick of a pinkie, Karen says, "For sure. Elvis has been one of the biggest inspirations for me on this tour."

Touring for Show Your Bones seems to have been a broadening experience in many ways. One thing that caught Karen by surprise was the band's off-the-chain reception when visiting foreign lands.

"We played in Poland for the first time," she recalls. "And people there don't generally speak English -- not like in some European countries, where it's kind of the norm. And, you know, sometimes people sing along when we're playing, and that's nice, but in Poland the audience was so loud, singing along with every word, that we couldn't even hear ourselves. That was just . . . incredible. I have no idea what to make of that; it's very humbling in a strange way. Gratifying. But very kind of weird."

These days the Yeah Yeah Yeahs are a bicoastal band, with Karen living in Los Angeles while the rest of the guys remain in their native New York City.

"It definitely makes it hard," Karen admits, especially when it comes to writing and rehearsing new material. "It's two completely different states of mind: the touring state and the songwriting state. When I'm out on the road, I can't even imagine what I would even write about. If I tried to write that way, it would turn out to be stuff about airplanes and hotel rooms and crazy fans, which nobody can really relate to."

"Exactly. One of the biggest challenges with writing the Show Your Bones material was just getting my life to where it was normal enough again that I could just write things that would even make sense to people."

The pop life is never easy. Especially when, like Karen O and the Yeah Yeah Yeahs, you're something of a . . . well, okay: a phenomena.