CPH Soars Around The World 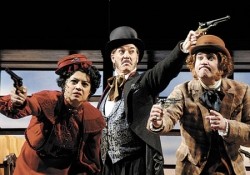 I must confess that I have fantasies of taking on the roles of two indomitable educators who have lit up the stage and screen for decades. Hence, I see myself as a rumpled Mr. Chips or a radiant Miss Anna in Siam, leading my devoted young charges out of the wilderness of videogames into the elegant clockwork bliss of Cleveland Play House's production of Around the World in 80 Days.

Adaptor Mark Brown has liberated Jules Verne's imperishable 1873 picaresque novel, which details one Phileas Fogg's adventures in winning his daring bet that it was possible in the 19th century to circumnavigate the globe in 80 days. The finest achievement of this adaptation is that it obliterates the memory of the 1956 Hollywood film version, which was perhaps the most synthetic soufflé to ever have five Oscars bestowed upon it, including Best Picture. Anyone with a fondness for recollections of hucksters past will recall how producer Mike Todd dredged up a pack of '40s celebrities, ranging from Noel Coward to Frank Sinatra, to inflate Verne's adventure into a souvenir-program, reserved-seat epic that made The Ten Commandments seem like a short story.

Brown, on the other hand, gives us a refresher course in theatrical game-playing, evoking all the Saturday movie matinees that once made childhood a joyous kingdom. In the tradition of Charles Ludlam's Ridiculous Theatrical Company, the adaptor uses five actors - in this case, four men and one woman - to portray an army of characters.

Director Bart DeLorenzo employs this freewheeling theatrical style like a ringmaster, going from Monty Python lunacy to Forbidden Broadway-style spoofs to the wonders of British pantomimes. In the staid confines of a Victorian library, we'll have a painting of a sailing ship moving on a rope to become the actual thing. Three actors seated at a table are suddenly aboard an elephant, riding to the rescue of an Indian princess. A mere silhouette makes us believe we're watching a ferocious battle with marauding Indians. All this is done with a dashing grace that evokes a Jerome Robbins ballet.

Instructed to pose like daguerreotypes, the incomparable ensemble at first approach their roles like living marionettes. But like a squad of Pinocchios, we relish them as they gradually turn before our eyes into endearing flesh and blood. If charisma dictates billing, Brian Sills as Fogg's Figaro, Passepartout, is the show's star. We have to look to Peter Sellers in his heyday for such magnificently mangled French. Keythe Farley's Fogg brings to mind the B-movie nobility of Peter Cushing in his Hammer film roles; Anna Khaja makes a slightly more plausible Indian princess than Shirley MacLaine did in the film, while Michael Weber as a bumbling detective plays the ham without turning into bacon.

My favorite anecdote concerning the play is that a friend's father heartily recommended the film version -which he detested - to all his friends, explaining "Why should I be the only schmuck paying through the nose to see it?" With the recession prompting CPH to offer two-for-one tickets, it's those who don't pay who will be the losers.