After years of recording in vain, David Gray climbed into relevance with White Ladder. 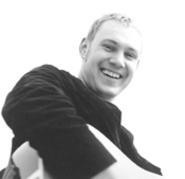 If David Gray were a bigger star, he'd have his own Behind the Music special by now. After the three albums he released in the '90s all bombed, he questioned whether he chose the right career path and entered a deep period of despondency. Finally, he decided to make one last attempt at the music thing, recording without aid (financial or otherwise) or interference from the industry. Once White Ladder, his self-released album, found minor success in the U.K., it got picked up for wider distribution and landed in the States via fan Dave Matthews's record label. Word of mouth spread, and a cult hero of sorts was born.

If David Gray were Huey Lewis or Journey, his story would be chronicled on VH1. But Gray, an unassuming and likable singer-songwriter more old-fashioned than his songs let on, is just now cracking the mainstream with White Ladder, the little album that could.

"We have fans of all ages," Gray says, trying to explain his sudden acceptance into CD players the world over. "It doesn't seem to be a thirtysomething backlash against anything. It really is a total mixture at the gigs, from the old Dylan-heads of the '60s to a bunch of ravers and young kids.

"It's been quite a pop thing, as well as being more mature listeners' contemporary choice or whatever," he continues. "It's been across the board. I can sort of pontificate on the broader implications of why this record has done well in this time of bubblegum pop. There's that hard hip-hop sound and me and a few other people. I just think, if you like good songs and you get it right, people get into it."

Perhaps, but Gray's 1993 debut, A Century Ends, also had some good songs. As did the following year's Flesh and '96's Sell, Sell, Sell. But nobody bought them. White Ladder is a bit more accessible, and its first single, the spry "Babylon," is one of the finest songs in the singer-songwriter tradition to get airplay the past few years. (Actually, you can probably count on one hand the number of folk-pop tunes that have been played on the radio the past decade or so.)

"It's not old-style acoustic singer-songwriter stuff," Gray says of White Ladder, which recently went platinum. "It's got a different vibe to it. It's from now, and I think that's why this record has succeeded, where perhaps my other ones didn't really stand a chance. They were so obviously relative to the great older albums of Dylan and Van Morrison, whereas this one has that flavor, but also something else. It has a character and style that is more mine [than] the people I've always emulated."

The 33-year-old Manchester, England native is still somewhat baffled by White Ladder's slow climb. Throughout the stasis of the past eight years, he managed to sustain a dedicated fan base in Ireland. That, he says, is what kept him going.

"After two unsuccessful records with Virgin Records, I decided to have a really proper unsuccessful one and went with EMI," he explains. "That was an absolutely abysmal period. After that, I was shaken up and nonplused by the whole thing.

"Music gets a bit claustrophobic if it's just yours," he continues. "It's there to be enjoyed and taken off your hands by the public. In Ireland, that was happening. Every time I went there, it was like breathing in oxygen after a very long deep-sea dive."

But most of the time, Gray was waiting to exhale and says he eventually reached a point where he thought maybe he should have pursued other artistic endeavors -- namely, painting.

"But I didn't really believe it," he says. "It took awhile to regain my strength in order to get out of contract with EMI, where I was supposed to be making another record. In that period, I wrote a lot. And that changed my view a little bit, basically [allowing me] to let go of the angst that had been plaguing me. I changed my approach to writing stuff. And I started working on what would become White Ladder."

Three years ago, with drummer/collaborator Clune, Gray went into a small studio and began loosely working on new material.

"It was a great, totally unself-conscious recording," he recalls. "We weren't sitting around thinking how to make a hit. I was basically writing on the spot in the studio. We were writing and recording things before I even had a chance to think they might be important. It will never again be as innocent as that was, because we didn't have a record company, there was no success, and there was no audience there gagging to hear it. We were just making the music for ourselves and really enjoying ourselves with our limited recording facility and getting the most of the songs with the few pieces of equipment that we had."

White Ladder was originally self-released in Ireland in early 1999. Several months later, it was released in England. In March of last year, Dave Matthews's custom label, ATO, licensed it as its first-ever release, and Gray, in turn, struck a deal with Matthews's major home, RCA. "We made the record in the summer of 1998, and it's still going strong," Gray muses. "By the end of the summer, it was over in the U.K. But in America, it really just got going. So it's this strange time lag."

Gray recently started his fourth U.S. tour since the release of White Ladder. He says if there is one downside to this sudden rush of semi-fame, it's the constant pushing of a record filled with songs that are now three years old.

"I have my creative cycle ground to a halt," he sighs. "Because you can't do loads of promo, loads of gigs, loads of driving and flying around and still be thinking, Oh, here's a new song. That part of your brain just sort of shuts off, and you go into survival mode. You have flickers of it when you stop for a moment, but basically you're just moving from town to town."

Gray has managed to write a few new songs over the past couple of years, but says, "Normally, I would have made another record last year." He hopes to return to the studio in September, when the current rush of White Ladder finally allows him to take a breath. Still, Gray doesn't want to be construed as a whiner, detailing the hardship and travail of the road to anyone who will listen.

"I've been given success in all kinds of different places," he happily notes. "It's definitely been worth it. Success was one thing my career was definitely lacking."