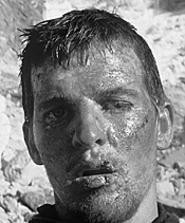 Some acts of courage command everyone's respect -- the firefighter's return to a burning house to rescue a child, the infantryman's sacrifice of self for a wounded comrade, the weary black woman's refusal to yield her seat on a segregated bus. Sometimes, though, courage can feel clouded -- especially when it's a response to voluntary risk, or macho vanity. Even while they're gripped by white-knuckle suspense, viewers will probably form their own notions about the courage on display in Touching the Void, director Kevin Macdonald's harrowing film about the ill-fated 1985 attempt by two British mountain climbers to conquer a forbidding 21,000-foot peak in the Peruvian Andes.

In the end, 21-year-old Simon Yates and 25-year-old Joe Simpson got up the mountain and back down again. We know that from the start, because Yates and Simpson are the living, breathing, talking heads telling us about the ordeal on-camera, and because Simpson wrote a book about it. But the journey was anything but routine. No one had ever climbed Siula Grande, and for good reason. It is, it turns out, less a mountain peak than one huge, treacherous icicle with few navigable routes up or down, and the fearless young purists' resolve to scale it in the classic alpine style -- two blokes connected by one rope -- signaled disaster from the start. For that, Simpson and Yates have become legends among their peers -- and for a couple of other things, too. First, they survived. But during their perilous descent, Simpson fell and shattered his leg, and the controversial moment eventually came when Yates, believing Simpson was dead, cut the slender thread joining him to his partner, who was dangling in the air, unseen, a hundred feet below. Many in the code-bound climbing fraternity have never forgiven Yates, although Simpson has.

Moral quandaries and the insouciance of youth aside, Void has to be the most dangerous-looking, thrill-packed mountaineering movie ever made, a relentless nail-biter that puts to shame pretenders like Vertical Limit, the Chris O'Donnell-Scott Glenn vehicle that cherry-picked Simpson's and Yates's lives in the phoniest Hollywood style imaginable. Void survived another ridiculous threat, too: Warner Brothers optioned Simpson's memoir as a project for Tom Cruise, but the plans fell through. Maybe there is a God, even though Simpson says he's an atheist.

Macdonald is best known for his Oscar-winner, One Day in September, a disturbing documentary about the terrorist hostage crisis at the 1972 Munich Olympics. Void is a different piece of work altogether, a nearly flawless example of "docudrama," a hybrid form that seeks to combine the real and the reimagined, often with disastrous results. In this case, though, Macdonald creates high tension between his dispassionate, classically "British" talking-head interviews with the two climbers (separate interviews, it's worth noting) and his breathtaking re-creation of the climb, itself filmed at great risk in the Andes and the French Alps. Here he uses actors -- Brendan Mackey as Simpson and Nicholas Aaron as Yates.

No swirling soap flakes or white plastic glaciers for these guys. If you suffer from vertigo or get easily chilled by visual suggestion, stay away. Because Macdonald and his intrepid crew and actors give us the real thing -- gorgeous aerial shots of awesome peaks festooned with elaborate mushrooms and meringues of snow, wrenching close-ups of the climbers trying to sink their crampons into vertical faces of ice and rock, weather so bleak and angry (wind chills fell to minus 80) that you may feel like slipping out to the concession stand for hot coffee.

For Simpson -- alone, weak, hypothermic, and in agony from his multiple fractures -- survival is a long shot. When he falls into a chillingly beautiful crevasse, it may as well be the mouth of hell. But to his credit, Macdonald refrains from shoving symbols at us. Simpson's miraculous emergence from his ice-blue death trap and his painful, crablike descent down the mountain and across a huge expanse of sharp rocks are presented so matter-of-factly that we must conjure the deeper meaning of it all for ourselves, just as we are left to contemplate the nature of Simpson's courage. But neither Macdonald nor the reserved Brits retelling their story put too fine a point on it. One of Void's great strengths is that it doesn't say much about "voids." It simply shows us, in incredibly vivid detail, heart-stopping danger and the raw will to survive.

The film's most fascinating unanswered question concerns the relationship of the two mountaineers today. "We wanted to climb the world," Simpson tells us early on. But man's fall, we come to suspect, has a way of forever changing boundless hope, ambition, and the blood bond of human beings seeking to grasp the unknown.