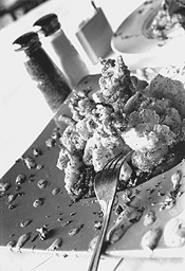 The big guy at a nearby table couldn't keep his cell phone quiet. It rang; he answered. He talked for two or three minutes, hung up, and it rang again. Finally, even he had had enough. "Listen," he said to his insistent caller. "I'm having dinner at some Italian restaurant in the mall. Let me call you back tomorrow."

Obviously, Mr. Dine-us Interruptus has a lot to learn. First off, it's terribly rude to carry on phone conversations in the middle of a public dining room. But second, and more importantly, Posto Vecchio is far more than an Italian restaurant.

Located in a corner of North Olmsted's Great Northern Mall, in space formerly occupied by the Spaghetti Company, Posto Vecchio has billed itself since it opened in May as an Italian-American bistro. While it is true that, in response to popular demand, menu selections now lean a bit more heavily toward the Italian, it's still easy to eat well here without ever encountering a meatball or a drop of marinara. In addition, Manager Phillip McGrath says lunch and dinner specials tend to come down firmly in the American camp; unfortunately, on neither of two dinner visits were we told of any specials at all, regardless of nationality, so we'll just have to take his word for that.

What we have encountered, however, has been almost uniformly excellent food. Portions are mammoth, flavors are generally robust, and presentation is much nicer than it has to be for a spot where dinner entrées hover in the $9 to $14 range. A basket of warm, crusty Italian bread and a good-quality olive oil appear at the table almost as soon as guests take their seats; sweet butter is also available. And the modest wine list, which includes a number of choices available by the glass as well as by the bottle, conceals at least one real gem: a reasonably priced but surprisingly sophisticated Conti Contini Sangiovese from Tuscany ($6/glass; $24/bottle), which is as delightful with spaghetti as it is with seafood or grilled meats.

Like Piccolo Mondo, Tuscany, and Tuscany 55, Posto Vecchio is owned by Cleveland restaurateur Carl Quagliata, and shades of those other spots are apparent in the restaurant's stylish decor. Interior windows facing into the mall are cleverly dressed to resemble those of an Italian market, and walls are painted a sunny golden-brown. In one dining room, seating is provided in a series of roomy, private booths whose shape suggests that they have been fashioned from giant wine barrels; the other, more airy dining room overlooks an outdoor patio and is decorated with oversized stoneware urns and colorful framed advertising posters.

If Posto Vecchio's decor reflects the tastes of its owner, the menu -- mostly standard dishes with an added touch of grace -- mirrors the sensibilities of Executive Chef Dean DiLuciano, who joined the Quagliata empire after leaving a similar position in the doomed restaurant Classics. (That bastion of fine Continental dining is scheduled to fall to the wrecking ball later this month.) From crab cakes to pan-seared salmon to a savory pot roast that would make your mother weep with envy, it is clear that DiLuciano's skilled hand has guided the development and preparation of the offerings.

Crab cakes, in fact, were standard fare on DiLuciano's menu at Classics, and an appetizer portion we sampled at Posto Vecchio was as flavorful, if not as beautifully presented, as the ones we ate downtown. The two moderate-sized patties of lump crabmeat, served on a bed of undressed mixed greens, were flecked with bits of sweet red pepper and had a delicate, fresh aroma that spoke of their recent connection to the sea. They contained little obvious filler and, unlike ones we have had at Classics, these two babies were 100 percent shell-free. As a garnish, instead of the red-curry aoili featured downtown, DiLuciano's current version of this dish calls for a ring of thick, creamy red-pepper aoili, which adds a lovely piquancy to the crab.

Soups, too, show a sophisticated touch. A big crock of Three-Onion Soup, with Bermuda, Spanish, and Maui onion, a handful of bite-sized croutons, and a thick layer of melted provolone, was based on a robust beef broth that took a pleasantly sweet note from the caramelized onions. Likewise, a wading-pool-sized bowl of delicious Italian Wedding Soup featured four tender, dainty veal meatballs in a rich chicken broth studded with bits of chicken, vegetables, and tiny star-shaped pasta.

Less suave but still well-executed was a Mozzarella Steak: a huge portion of nutty, deep-fried mozzarella in a thick coating of crisp breadcrumbs. Not a bit greasy, although larger than any one health-conscious person should tackle (which is not to say we didn't), the fried cheese was wonderfully set off by a sweet-and-tangy marinara sauce that brightened the plate as well as the palate.

The menu also includes 4 gourmet pizzas and 10 pasta entrées, some of which were familiar to us from meals at other Quagliata restaurants. One of them, a signature pasta dish of Ravioli Margo, turned out to be one of the kitchen's few disappointments. In this particular version, seven spinach ravioli were filled with a mild ricotta-and-spinach stuffing, topped with at least a half-cup of deep-fried, honey-glazed walnuts, and settled into a simple sauce of what appeared to be melted butter, making for a dish in which the sweet flavors significantly overwhelmed the savory. The menu had called for a sage-scented brown-butter sauce, rather than the plain melted butter we seemed to get, and that might have helped to restore the flavor balance; but as it was, the sugary dish left us more puzzled than pleased.

However, this miscalculation may have been part of more pervasive troubles in the kitchen on this particular Saturday night. Our server -- who seemed plenty harried as it was -- said the backed-up kitchen was giving the servers fits with its slow turnaround on orders. And indeed, we waited a good long time for both our entrées and our desserts to arrive. But adding to the problem was our server's propensity for flying by our booth so quickly that she never heard our requests. We had to ask repeatedly for water, coffee, and clean silver, mostly because she was already off and running before we could daintily dab our lips and express our needs. And beyond not taking the time to tell us about dinner specials or to offer us a side-salad option, she irritated us by snatching away our plates before we were finished and by bringing our check without seeing if we wanted dessert (which, of course, we did). Thankfully, during our next visit on a slower weekday evening, service and pacing were comparatively dandy.

Much more satisfactory than the odd ravioli was an entrée of Penne Carbonara -- al dente pasta tossed with generous amounts of chopped Italian bacon, meltingly tender caramelized onion, and earthy porcini mushrooms in a garlic-enhanced cream sauce, served in a bowl big enough to hold dinner for an entire family.

Non-pasta entrées included a wonderfully moist salmon filet, presented on a platform of creamy, vegetable-studded risotto and topped with a frizzle of thin fried onions. The pan searing had actually caramelized the fish's natural juices, creating a buttery, wafer-thin crust that was the perfect foil for the sweet, juicy meat just below the surface. The fragrant basil-cream sauce that ringed the plate was a delightful finishing touch.

Country Pot Roast -- three thick slices of braised beef topped with bits of vegetables and sauced with savory, red-wine-enhanced pan juices -- was also delectable. The hunks of beef were moist and absolutely tender -- no small feat when it comes to pot roast, which often ends up dry and chewy -- and, settled on top of a mound of chunky, lightly garlic-scented mashed potatoes, the entire dish was as comforting as a warm hug.

Side salads are available for an extra $1 with entrées or specialty pizzas, although the surprisingly tired greens topped with a slice of pale tomato that we were served on one visit hardly seemed worth the trouble.

Unless you are willing to commit early on to a doggie bag, desserts may be only a fond wish at Posto Vecchio: Meal portions are so large that you may well find yourself unable to do justice to a sweet conclusion. Fortunately for die-hard sweet teeth, freshly made gelato -- Italian ice cream -- is on the dessert list. While it is delectably rich and creamy, gelato has fewer calories than premium ice cream and, as with Jell-O, we always seem able to find room for it.

For those who have managed to save a somewhat larger gastronomic space, a good bet is a slice of crunchy phyllo-wrapped apple strudel, topped with a scoop of vanilla gelato and drizzled with caramel syrup. A creation of Sous Chef Brian Conley, the wedge of warm strudel is filled with slices of tender baked apples that slowly cool beneath the melting ice cream. A deliciously clever take on Mom's apple pie, the strudel makes a fine ending to either an Italian or an American meal.

McGrath says business has been growing steadily in the months since the restaurant opened, and weekends usually hop. But understandably, it's been a tough balancing act trying to sell fine dining to a mall crowd accustomed to grabbing a burger and fries. Yet Posto Vecchio, with its very good meals at reasonable prices, is one deal no serious food shopper would want to pass up.