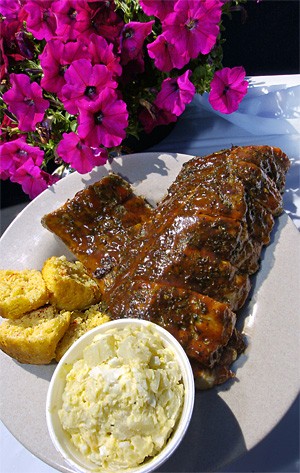 Listen up, alfresco fans: A Pepsi and a can of Pringles is not a picnic.

On the other hand, who wants to slave away in the kitchen on a beautiful summer's day, just to end up stowing your culinary masterpieces in a cooler for a trek to the park?

The solution, of course, is to grab some great to-go chow on your way to the wilderness. Here are two spots that specialize in what may be the pinnacle of summertime carryout — barbecued meats with all the fixin's. All you need to pack is the tablecloth, the wet wipes, and directions to the nearest park.

Great Scott's Market & Deli
BBQ boss Scott Totten knows his way around a slab o' meat. A self-taught chef, well-seasoned caterer, and owner of this upscale deli, market, and bakery in Rocky River, Totten cribbed his rib riffs from a nearly mythic source: a barefoot mentor in overalls, who peddled 'cue from a roadside stand near Greenville, North Carolina, when Totten was attending college there.

"No muss, no fuss," says Totten about his time-tested technique, which demands the ribs be slowly baked (not smoked), then finished on a gas grill (not wood or charcoal). "'Keep it simple' was the lesson he taught me, and that's still the way I do it today."

Predictably, the result is a different sort of barbecued baby-back rib, which Totten serves in the market's parking lot on Saturdays only: unusually moist, relentlessly meaty, and firm yet tender — but lacking the familiar smoky sweetness of typical cook-off fare. What isn't missing, though, is flat-out flavor: Thanks to a parsley-and-garlic-piqued dry rub and plenty of Totten's tangy 'cue sauce, goosed with ample amounts of both honey and Tabasco, the yum factor is high.

Also getting the Totten treatment: boneless, skinless chicken breast, which turned out tasty, if slightly dry. But we had no complaints about the Thumann's all-beef hot dog — plump, lightly charred, and pleasantly snappy, with a generous slather of that zesty sauce.

Ribs and chicken come with a moist cornmeal muffin, spiked with sweet corn and Peppadew peppers. Also available: a trio of top-notch homemade sides, including four-bean salad, caraway-seeded coleslaw, and our fave, a pared-down potato salad in a fresh-tasting dressing that permitted all the natural, spuddy goodness to shine through.

And what's a picnic without a sweet ending? For dessert, just step next door into Totten's bakery and pick up a couple of jumbo cupcakes, filled and frosted with an almost unbelievably rich, ultra-silky buttercream frosting.

We popped our well-packaged stash into the back seat and headed north to Detroit Road, where we drove approximately 500 feet east to Scenic Park Drive and then down into the Metroparks' Rocky River Reservation. Five minutes later, we were chin-deep in saucy pleasure.

Shoeless Joe's BBQ
Barely a wide spot on Olde Route Eight, as it winds its way through northern Summit County, Northfield Center is easy to overlook. Foodies, however, do so at their own peril, taking the chance they'll miss the superlative pierogi from Stan's Bakery, the yummy pies from Farinacci Pizza, Jim Rosati's exemplary frozen custard, and the homey Polish eats from Babushka's Kitchen.

Like moths to a porch light, 'cue fans are drawn to the sweet, woodsy aromas wafting out of Bob Barrett's smoker, parked on a patch of gravel behind his corner carryout spot.

Influenced by the tenets of Memphis-style 'cue, Barrett is a traditionalist, coating his ribs, chicken, and pork butt (for pulled-pork sandwiches) in an ample layer of his secret dry rub, then settling them into the smoker, over a low, slow applewood fire, for anywhere from 3 to 12 hours. Afterward, the meats are finished on a gas-fired wood-burning grill, then slathered with Barrett's own mildly sweet barbecue sauce, made and bottled to his specifications by Ohio City's American Culinary Concepts.

The result is some solidly good 'cue, particularly the firm, meaty St. Louis-style ribs, with their desirable pink "smoke ring" and a hint of wood-fired sweetness. Also a treat: the memorably moist chicken, almost indecently succulent beneath the layer of savory charred skin. In contrast, the enormous pulled-pork sandwich seemed slightly dry and just a little dull. Next time, we'll order it with coleslaw on top and splurge on an extra side of sauce, just to keep things interesting.

And for a spectacular setting, it would be hard to come up with a more perfect picnic table than one overlooking Brandywine Falls, less than a 10-minute car ride away. Part of the Cuyahoga Valley National Park, the 60-foot falls are located on Brandywine Road, approximately two miles south of Northfield Center.

That's our idea of alfresco fun.