Niko's on Detroit gives neighborhood eateries a high mark to aim for. 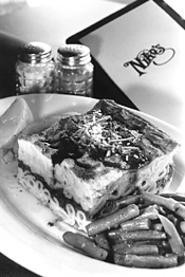 I wish Niko's were in my neighborhood, so I could devote happy hours to grazing my way through the restaurant's menu of Greek and Mediterranean home cooking. There would be moussaka on Monday . . . tzatziki on Tuesday. Another day, I'd turn my attention to the gyros, those breathtakingly savory sandwiches of seasoned ground beef and lamb, piled high on a pita and topped with onion, tomato, and cucumber-yogurt sauce. After that, I'd find time for flaming platters of saganaki, a mild Greek cheese, pan-fried in the kitchen, flambéed tableside in rum, and doused with fresh lemon. Saturday and Sunday would be for savoring souvlaki and seafood pasta, shish kebabs and spanakopita. And somehow, I'd squeeze in a few extra hours for indulging in homemade goodies like galaktobouriko, baklava, and creamy rice pudding.

Even at that rate, I wouldn't have entirely exhausted the culinary possibilities. Not that that's a bad thing. Niko's, with its well-crafted food, reasonable prices, and appealing decor, is the kind of place diners can look forward to visiting again and again.

Niko Moulagianis opened the restaurant last December, in space that formerly housed a fur shop. Now remodeled and redecorated, the high-ceilinged room oozes an upscale charm that the casual, blue-jean-friendly decor can't belie. The vaguely industrial look of rough denim-colored walls, exposed ductwork, neon accent lights, and slate-gray tabletops makes a charming juxtaposition to tasteful touches like blue cloth napkins, hefty European-style flatware, diaphanous window treatments, an opalescent granite bar top, and the geometric "Greek key" designs that decorate the walls. Taken as a whole, the resulting ambiance is both playful and sophisticated, as well suited to a lunch with co-workers as to a family dinner, and as much fun for an evening of drinks and appetizers as for a full-course meal.

Moulagianis, who previously owned sports bars in Parma and Brunswick, credits his Greek-born mother, Stella, for the restaurant's authentic, handcrafted cuisine. Almost everything -- sauces, syrups, entrées, and desserts -- is made fresh and in-house, either by "Mama Niko" or under her watchful eye and, many times, from her own recipes. Pillowy wedges of pita (not homemade, but astonishingly fresh and hot off the grill) are just right for scooping up Stella Moulagianis's hummus or tangy cucumber-yogurt dip (tzatziki). Tidy, tightly wrapped stuffed grape leaves (dolmades, Mama Niko's specialty) are carefully filled with rice, finely ground beef, and crushed mint, and buzz with notes of pepper and lemon. And if the timing is right, warm galaktobouriko (phyllo dough wrapped around a firm custard filling) may be brought to the table straight from the oven, in a pool of orange-blossom water and honey. Clearly, this isn't a kitchen that skimps on quality or cuts corners on technique. The resulting dishes are straightforward and homey, but perfectly wrought and bursting with goodness.

Because appetizer portions are relatively large and entrées are relatively modest, it's not a bad idea to begin a visit to Niko's by sharing an array of starters around the table. Beyond the saganaki, the dolmades, and the tzatziki, the kitchen turns out delicious deep-fried calamari: tender and tasty inside its delicate coating of seasoned flour, served with a wedge of lemon and chunky marinara, fragrant with olive oil. Alternatively, an appetizer of portobello mushroom caps, stuffed with tiny rock shrimp, crabmeat, and bread crumbs, and blanketed with melted mozzarella cheese, tasted rich and smoky. And Greek Fries -- batter-dipped potato wedges topped with chunks of creamy, slightly tart feta cheese, melted mozzarella, chopped tomato, and oregano, and mounded onto a white oval platter -- were savory, satisfying, and not a bit greasy.

For lunch or light noshing, pita sandwich choices include BLTs, deep-fried cod, broiled chicken, and a meat-free number with veggies, cucumber sauce, and feta cheese. But the real standouts are the ground-beef-and-lamb gyros: two-fisted beauties whose freshness and flavor are remarkable. Is it the soft, chewy pita? The zesty sauce? Or the lean, well-seasoned meat, painstakingly cooked over low heat in Niko's kitchen? Who knows? But these gyros may well be the best in the region, and they put their greasy, salty concession-stand cousins to shame. All sandwiches come with a choice of french fries (good), rice pilaf (better), or roasted potatoes (best) -- firm but tender wedges of peeled potato, slathered with lemon juice and butter, and topped with crumbled Greek oregano.

Entrées, too, are accompanied by a choice of rice or potatoes, as well as with loaves of warm, yeasty, crisp-crusted bread, garlicky Greek-style green beans, and the option of a side salad for an additional $2. Pastitsio (layers of penne pasta and spiced ground beef, topped with a perfectly executed béchamel sauce and baked until bubbly) was surprisingly light and mellow. Baked spanakopita, with unusually thick layers of phyllo wrapped around a filling of spinach, onion, mint, and a bit of feta, was substantial and fragrant. And kokkinisto arni (a braised lamb shank) was falling-off-the-bone fragile and redolent of tomato and cloves.

Whole cloves also found their way into our sweetly sticky baklava: thick triangles constructed from alternating layers of phyllo and chopped walnuts; while the homemade rice pudding -- almost as fluffy as tapioca -- was piqued with a hint of lemon. To go with the sweets, big mugs of regular or decaffeinated coffee were smooth and robust. For those craving stronger libations, the bar is well stocked and makes a mean Cosmopolitan, and the international wine list includes a solid if not bargain-priced assortment of bubblies, whites, and reds, including a number of Greek wines.

When we visited at noon during a weekday, the restaurant was practically empty, and our friendly, enthusiastic server was happy to let us dawdle over desserts and coffee. At the height of the Friday night dinner hour, though, the scene was radically different. Nearly every table was filled, both in the dining room and in the attached lounge; the noise level was hollering high; and servers darted around the room in well-organized choreography, bringing food, clearing tables, and sweeping crumbs from the floor. (Beyond all its other notable qualities, the well-staffed kitchen is apparently a model of efficiency, and even during the dinner crush, dishes appeared at the table with impressive speed.) Certainly, we ordered an immodest amount of food that night, but by the time dessert rolled around, it seemed pretty clear that our busy server was more than a little eager to be rid of us. We had scarcely risen from our chairs when he and his comrades descended upon our former table, whisking away plates and laying down place settings for the next party. So be warned: If you are serious about lingering, weekend dinners at Niko's are probably neither the time nor the place.

Each Thursday night finds a DJ spinning contemporary Greek and Euro-techno tunes; on Fridays, more traditional, live Greek music by Stigma starts at 10 p.m. for the 21-and-up crowd. This blending of the time-honored with the timely seems of one piece with the restaurant's simple but sophisticated food and the relaxed yet up-to-date ambiance, and is a large measure of its charm. Thoroughly modern but pleasantly cozy, Niko's is a prime example of how fine a neighborhood restaurant can be.