Grill of My Dreams

Casual sophistication and seafood at Blake's 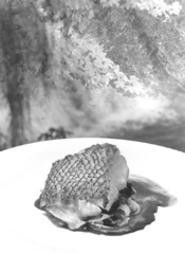 If their new Chagrin Falls restaurant is any indication, the members of Cleveland's Hyde Park Group are about to do for seafood what they have already done for steak: provide comfortably upscale outlets for some of the best, most precisely prepared dinners around.

The casually sophisticated Blake's Seafood Grill, the group's first expression of its new seafood concept, is snuggled into a vintage building high on the north bank of the Chagrin River. The rambling Western Reserve-style structure, which formerly housed Leonetti's, has had a thorough makeover since the Hyde Park people got their hands on it last year. Now, the ground-floor dining rooms come complete with dark oak floors, plenty of masculine wood trim, exposed brick walls, and expansive, multipaned windows overlooking the water. A curvy, copper-topped bar anchors the perpetually bustling lounge on this level and provides a perch for peeking into Executive Chef Patrick McNamara's inviting open kitchen. Down a flight of broad stairs is another dining space that also serves as the wine cellar; the thick whitewashed walls, slate floors, and red velvet draperies give this cozy area an almost Mediterranean feel. A small deck opens off this level, with a handful of riverfront tables set for scenic outdoor dining.

Terry T. Hargis, the Hyde Park Group's corporate executive chef, owner Joe Saccone, and McNamara designed the restaurant's large menu. Together, the triumvirate put together a lengthy listing of both classic (think shrimp cocktail and sautéed sole) and contemporary (say, diver's scallops and sesame-seared ahi tuna) seafood delights that will have any red-blooded diner drooling within moments of taking a seat.

Our only complaint with the menu, in fact, is that there are so many delicious items on it that we hardly knew where to begin. With 16 appetizers, soups, and salads; 9 seafood specialties; 8 meat, poultry, and pasta entrées (including some Hyde Park favorites); and -- the real stars of the show -- an assortment of wood-grilled fish, the mouthwatering choices are deliciously abundant. Of course, as is the case at Hyde Park's steakhouses, such an embarrassment of riches carries a price tag. While the majority of entrées are less than $20, menu items are mostly à la carte. That means that, by the time you add a salad or appetizer ($4 to $10), a carbo or veggie side dish ($4 to $7), a homemade dessert ($4 to $6), and something to drink, a $100 dinner for two is entirely predictable.

But I dare say it's worth the splurge. The people in Blake's kitchen clearly know their way around the catch of the day, and that's no fish tale. Pan-seared diver's scallops, fat, bronzed, and just barely opaque, are hugely sweet and delicate as custard. Juicy prawns, coated with crunchy shredded phyllo, are so fresh and crisp that they literally pop when we bite into them. Rosy Chesapeake She-Crab Soup, made with crabmeat and fresh roe, and seasoned with sherry and Worcestershire sauce, is a profound treatise on texture and flavor. And it's not just the main events that the kitchen staff has mastered. Good as they are, the phyllo-crusted shrimp profit immensely from a wonderful glaze of gingery soy reduction that rings the plate, and the perfect diver's scallops wouldn't be half as good without the portion of rich bacon-and-corn risotto and the drizzle of intense black-pepper-and-wine reduction sauce that underpin them.

Among the salads, grilled hearts of romaine -- their edges slightly blackened from the fire -- are a heady combination of juicy crunch and smoky sweetness. Topped with a cold-pressed olive oil vinaigrette, which possesses a depth of flavor that brings to mind a hearty tapenade, along with a few slices of rich prosciutto and some salty shards of shaved Asiago, the salad is one of the finest, most innovative, and most delicious Mediterranean-style tastes around. (McNamara brought this particular recipe with him from Piccolo Mondo, where it was one of our favorite items on Chicagoan Todd Stein's classy contemporary Mediterranean menu; McNamara was Stein's sous chef there, before the restaurant was purchased by the Hyde Park folks and Stein headed for other culinary pastures.)

But the main attraction at Blake's must be the luscious grilled fish, done to perfection over an authentic wood fire. McNamara carefully matches the essence of the hardwoods (sugar maple, apple, hickory, mesquite, and oak) to the flavor of the meat, a process that infuses each item with an indescribable sweetness and aroma. Everyday fish selections include grouper, salmon, and yellow-fin tuna; items like sea bass, sturgeon, trout, and tilapia show up as daily specials. Diners can choose to have their fish served simply seasoned and grilled, with a buttery "Crystal Citrus" sauce on the side, or -- for those who don't know the meaning of "enough" -- with a slathering of crabmeat-studded béarnaise sauce. It's no exaggeration to say that a shimmering filet of maple-grilled sea bass, which we savored with chunks of crabmeat and that slightly piquant béarnaise, was one of the best-tasting dishes we've had.

Almost as good was a thick, rosy filet of ahi tuna served with the Crystal Citrus sauce. Grilled very rare, the fish had the firm but yielding texture and meaty taste of an aged filet mignon. The wood-grilled entrées are presented atop a bed of sautéed, grilled vegetables (sturdy slabs of zucchini, yellow squash, carrot, portobello mushroom, and colorful peppers) that are carefully monitored so that they come to the table tender, juicy, and just slightly crisp.

Very good freshly baked breads -- crusty sourdough rolls and thick slices of a dense Asiago-and-onion loaf -- are brought to the table shortly after guests are seated. During a visit on a busy Saturday night, our friendly but thoroughly professional server seemed delighted by our enthusiasm for the cheese bread and made it a point to refill our basket with more warm slices. Despite what seemed like a steady crush of diners, she also found time to keep our table cleared and crumbed, package our leftovers (you will have leftovers), and ensure that our oversized coffee mugs were constantly filled to the brim.

After all the excellent main events, it seems almost churlish to offer somewhat fainter praises for desserts. But several of the homemade sweeties, while good, were shy of perfection. A petite lemon tart got some pizzazz from having been run under the broiler, à la crème brûlée, to develop a crunchy, caramelized surface, but the nice shortbread crust had rather too little sweet-tart filling. Warm peach cobbler, topped with plenty of gently melting vanilla ice cream and prettily presented in a large ribbed compote, would have been even better if its crumb topping hadn't been soggy. But a substantial and delightfully light-textured rectangle of Bananas Foster Bread Pudding, infused with essence of banana and set afloat on a pool of delectable caramel-rum sauce, was a real standout.

As Saccone and his partners have done with their highly successful Hyde Park steakhouses, expect Blake's Seafood Grill to be slowly and thoughtfully developed into a nationwide operation. While corporate cuisine, no matter how well-executed, typically lacks the soul of dishes created by talented chef-owners, there is no doubt that Saccone, Hargis, and McNamara are onto something special here. With the skillfully prepared, well-conceived dishes that come out of the kitchen at Blake's, no one will ever accuse the restaurant of being just another link in a chain.