Underworld is a slick and silly creature feature. 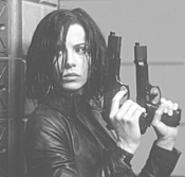 Somewhere in the deepest mists of Eastern Europe lies an urban hell shrouded in shadowy azure, where darkly enchanted, black-leather-clad denizens leap about to thudding techno, blurting outrageously melodramatic proclamations in randomly accented English. It's The Crow meets The Matrix, it's gothcore tricked out with wire-stunts, and -- most important - it's rabid werewolves mixing it up with snooty vampires. Welcome to Underworld.

The feature opens promisingly. Loitering among rooftop gargoyles exactly like a female Batman, the svelte Selene (Kate Beckinsale) executes an impossibly graceful leap to gritty street level. Instantly, chaos erupts, crashing down into the subway, where rival gangs, clad in the aforementioned sexy duds, open fire and bare fangs amid carefully placed ads for Clif Bars and Bacardi. The scene is mean, monstrous, and kinda romantic, as Selene catches the eye of a puzzled blond dude we'll later know as Michael (Scott Speedman), who figures prominently in the story.

Following the skirmish, the Vampire coven representative and card-carrying "death dealer" Selene retreats to a huge, dark castle, where silly-looking goth twerps cavort in their . . . I dunno . . . danse eternale, or whatever. Sillier still is her Vampire supervisor, Kraven (Shane Brolly), whose "spooky" and oft-repeated name sounds so stupid that he may as well be called "Dillweed," and worse: The actor playing the sucky sucker delivers every single line as an unintentional and unpardonable howler.

Speaking of howling, we also recoup with rival clan the Lycans, who prompt the question: Would you liken a Lycan to lichen? The answer is no. Although their collective species (derived from "lycanthrope," or wolf-man) sounds as threatening as "Kudzu" or "Slime-Mold," the Lycans are mean mofos, led by a bearded headbanger with the quintessentially silly goth name of Lucian (Michael Sheen), who has spent centuries struggling for vengeance against the arrogant Vampires, who once used the brutish Lycans as slaves and then tried to wipe them out. Assisting Lucian's twisted crusade is Raze (co-conceptualist Kevin Grevioux), whose voice is so unfathomably low, he makes James Earl Jones sound like Frankie Valli. Scary, indeed!

The deal here is that the Vampires and the Lycans loathe each other, much like the Capulets and Montagues. However, if Selene is our immortal but emotionally imperiled Juliet, who's our Romeo? Certainly it's not the lowly Trent Reznor-like clown-boy Kraven. And not that Cockney Vampire scientist Kahn (Robbie Gee), a brainiac who examines the Lycans' glowing bullets and helpfully observes that they contain radiation. Also, this movie's no Vampyros Lesbos, so the love interest is obviously not the feline Erika (Sophia Myles), whose fear of Lycans provides one of the movie's most amusing shocks. That leaves humble, mortal Michael -- but why?

This much can be offered: The Lycans have hatched a plot to combine their DNA with that of the Vampires, introducing a new hybrid species to end their conflict once and for all (Bush, Hussein, you game?). Being a medical practitioner, Michael may have what it takes to help them. However, when Lucian confronts Michael, the scene looks so much like Soundgarden's Kim Thayil arguing with Kurt Cobain that it provokes the understandably disturbed Selene to open a conveniently labeled, easy-open vault containing the long-slumbering Vampire elder, Viktor (Bill Nighy). Since Viktor is grumpy about being awakened a century early and doesn't much care for grunge-star look-alikes, all heck breaks loose.

Visually, Underworld is wild fun, since fledgling feature director Len Wiseman started off in production design, and creature designer Patrick Tatopoulos's diverse credits span Godzilla to Stuart Little. Very much as Blade II (and seemingly every other movie) has made use of Prague's dank, antiquated atmosphere, so does Underworld exploit the grand halls and shadowy corners of Budapest (the construction crew is composed of four Laszlos and a Zoltán). And Beckinsale rocks. One could call her seeming stock character "Trinity Croft," except that Beckinsale is so plausibly solemn, she makes the leads of The Matrix and Tomb Raider seem like Janeane Garofalo by comparison; better still, not once does she allow the movie to collapse into an all-out cheese fiesta, no matter how hard it tries.

Yes, with Underworld's guilty pleasures come copious clinkers -- foremost being its very narrative foundation, which explains vampirism and lycanthropy by way of science. More power to the writers for their creative stab, but skip the nuts and bolts: The reason a shocker like Alien or even The Blair Witch Project works is that the horror is present, but indefinable. And guys, chill on borrowing from so many obvious sources (even the climactic kill is swiped directly from the Euro-gloomy Equilibrium). Also, despite Wiseman's impressively oppressive atmosphere (the whole movie is literally blue), he hasn't yet got a handle on directing actors beyond cartoonish interaction.

Underworld is a project made for genre fans by genre fans, so it engenders more comic-book comradeship than awe. Still, it's tight enough and clearly primed for franchisehood. I happily await the next installment, which practically guarantees improvement.