Grovewood Gets a Raise 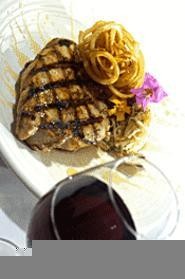 Foodies talk, even with their mouths full; and for the past few months, there's been chatter about the new menu at the Grovewood Tavern & Wine Bar, Beth Noragon's funky little neighborhood hangout in working-class Collinwood. Mostly, the gab revolves around the theme of "Twenty-eight dollars for ravioli?! What the @#*!$& are they thinking?!"

It's not that pricey entrées are rare around here. It's just that, for most of its six-year life, the Grovewood has been known as one of the city's great values -- a friendly joint, whose shabby looks and low prices belied a menu of surprisingly sophisticated fare.

Since summer, however, and the launch of Executive Chef Alex Daniels' new menu, some things have changed.

Oh, sure, with welcoming staffers and conscientious servers, the "friendly" part still stands. And the rec-room decor and bare-bones amenities still hover on the leading edge of "shabby," despite the new carpeting and wall coverings. It's not that we don't appreciate the upgrades, but cloth napkins would seem appropriate at these prices, and the not-so-sparkling ladies' room still resembles a broom closet.

Chef Daniels' food also continues in the Grovewood tradition, with sassy flavors, interesting pairings, and a contemporary sensibility. But the crux of the tavern's transformation is its prices, which have gone up to the point that a couple can easily drop $75 in one evening, even if they go light on the booze. The upshot: The Grovewood is no longer the across-the-board bargain it once was.

Which is not to say that the food isn't generally good; sometimes, in fact -- as in the case of the kitchen's signature spicy noodles yakitori (a dish that predates Chef Daniels by several years) -- it's downright delish. Tangled up in a hulking golden haystack, the chilled, chile-spiked, sesame-seed-studded noodles are fiery enough to bring tears to a diner's peepers, yet vivacious enough to force a smile from her tingling lips. They're joined by a choice of soy-glazed meats, including shrimp, salmon, scallops, or chicken. For real gustatory firepower, though, you can't beat the duck -- or, as the natives know it, the "quackitori." Call it what you will, the playful dish is a winner, with its chorus of yin-yang complements: hot versus cold, sweet versus spicy, and even elegance versus a certain atavistic earthiness.

Like his predecessors, Daniels does his thing in a tiny open kitchen that's so cramped, he has actually turned a window ledge into auxiliary counter space. Undoubtedly, it's a far cry from what he knew when he interned at hot spots like Charlie Trotter's eponymous atelier and Rick Tramonto's Tru, but it hasn't stopped him from trying to make exciting food with modern twists. Still, a diner can't help but notice that as recently as June, nothing on the menu exceeded $22, and most entrées checked in at $15 or less; today, most main dishes are at least $17, and a surf 'n' turf combo runs you $32.

Fortunately, in consideration of those with a tighter grip on their purse strings, oversized apps like the lip-smacking tapenade sampler or the rich, luxurious panko-crusted Boursin salad are big enough to serve as a light entrée; and sandwiches, most sided with long, lanky, freshly cut frites, remain accessibly priced at $7.50 to $13.50.

Beyond what's on the plate, though, the Grovewood's other claim to fame has long been its expansive, well-priced, international wine list -- and here, value still rules the day. The current menu includes more than 130 offerings by the bottle -- everything from cabs and zins to pinot noirs, viogniers, sherries, and dessert wines -- as well as around 90 by the glass and a handful of half-bottles. Most bottles are set in the $20-$40 range, including juicy little steals like the '03 Caymus Conundrum ($39.50) and the '01 Ravenswood Icon Shiraz ($32). Big spenders, too, can snag a deal with treats like the '00 Silver Oak Alexander Valley Cab ($77) and Veuve Cliquot Brut Champagne ($62). Almost all are available for carryout at state-minimum prices.

Beer-drinkers, too, have not been forgotten: There's an impressive array of domestic and imported bottles, including such out-of-the-ordinary pickings as the Lithuanian Kalnapilis, the smoked German Schlenkerla, and New York's He'brew Messiah Bold (motto: "The beer you've been waiting for").

We began one evening with the tapenade sampler, a trio of homemade schmears served with three mini-baguettes. Pure and intriguing, the triad included a bright, fruity, sun-dried tomato pesto; an unctuously rounded kalamata olive spread (the best we've had since Michael Herschman shut down Mojo); and an unusual blend of caramelized onions, ground walnuts, and gorgonzola, full of dark, autumnal flavors that revealed themselves slowly and seductively over the course of several seconds. The only complaint? As a starter, all that bread could certainly dampen a diner's appetite; substituting crackers, wafers, or crisp flatbreads for at least one of the baguettes wouldn't be a bad idea.

We were less enchanted with another app, though: the skimpy, haphazardly plated combo of four grilled, skewered shrimp and perhaps five small blocks of deeply grilled haloumi (a semi-hard white cheese from Cyprus, just right for cooking). Other than the smoky essence of the grill, neither the average shrimp nor the cheese struck any particular flavor notes. Fortunately, several cubes of juicy caramelized pineapple and a spicy mint and red-pepper salsa, on the side, helped throw off a few sparks.

Among entrées, a 16-ounce "Porterhouse" pork chop could scarcely have been more succulent, done to a "medium" turn and shellacked with an aromatic honey-truffle glaze. On top, a tall tangle of crisp fried-potato threads mingled with equally slender strips of apple and jicama, for a lip-smacking interplay of fruity sweetness and savor.

Then it was on to the mislabeled chicken-club "wrap" sandwich. While the fillings -- tender grilled breast meat, six strips of lean bacon, lettuce, and tomato -- were tasty, they were nestled inside a dryish loaf of pita, not a tortilla-like wrap. A wrap-happy companion never quite got over it.

Among sweet finales, options include crème brûlée, liquid-center chocolate cake, and the Blonde and the Chocolate Waffles. Fans of tall, fluffy Belgian waffles should be aware that the Grovewood's blonde waffle is an entirely different creation -- dense, slightly dry, but with a very European-tasting jolt of almond essence. On top, a scoop of vanilla ice cream and drizzles of caramel added moisture, although a toss of unripe strawberries seemed like an empty gesture. On another visit, the evening's dessert special was a wholesome-tasting apple brown betty -- skinless poached apple wedges finished with a spoonful of not-too-sweet oatmeal topping. Because we operate on the principle that a dessert should be decadent enough to justify the indulgence, we would have added a scoop of ice cream or a pouf of whipped cream to nudge this virtuous betty in the right direction.

Oh, and about that $28 ravioli . . . it was lobster, made particularly groovy by way of the zesty interplay between the ultra-sleek cream sauce, on the one hand, and the crimson crescents of piquant roasted tomatoes on the other. Fleshy flaps of oyster mushrooms (and really, Cleveland chefs, why can't you take a moment to cut these babies into less gruesome-looking strips or large dice?) added dark, woodsy bass tones; a few bits of lobster meat contributed a nutty trill.

As for the heart of the dish, crafted by Ohio City Pasta, there were five of the little gems, stuffed with a blend of ricotta, parsley, and lobster. (FYI, the pasta maker sells them, retail, at its West Side Market stand for $7.75 per dozen.) On top, a small, split lobster tail took its ease, offering up -- after a battle -- perhaps four bites of slightly dry meat. Better to have left off the uninteresting piece of tail and dropped the price by a couple of bucks, a companion noted.

Not that the dish didn't taste good, we agreed, dabbing our lips with the shredded remnants of our paper napkins and preparing for our turn in the broom closet, er, restroom. It just didn't seem like a great deal.