Guitar legend Adrian Belew gigs with kids half his age, tries to keep up 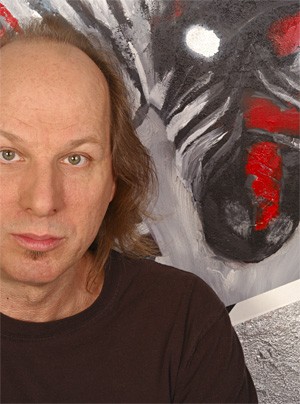 Adrian Belew recently celebrated his 30th anniversary as a professional musician. In 1977, Frank Zappa pulled the guitarist out of Kentucky club hell and cast him as an auxiliary musician who would join him onstage as performer or visual punch line. Sometimes Belew would wear a military uniform; other times he'd don a dress, like the one he sports in Zappa's 1979 concert film, Baby Snakes.

These days, Belew fronts a trio made up of 20-year-old drummer Eric Slick and Eric's 21-year-old bass-playing sister, Julie. Belew swears he has no intention of humiliating the kids onstage, as Zappa did to him years ago. Then again, Zappa taught him a valuable lesson in showmanship, he says.

Since those dress-wearing days, the 59-year-old guitarist has gigged with everyone from David Bowie to Talking Heads to Nine Inch Nails. He even fronted veteran prog-rockers King Crimson for a spell in the early '80s.

Belew's latest project features a pair of Philadelphia siblings who still live with their parents. They've been wowing audiences together since 2006. "The old guy in the middle isn't that bad either," jokes Belew, who met the Slicks after he participated in a Paul Green School of Rock Music program. The kids' father gave his children instruments a decade ago and pointed them toward his vinyl record collection, which featured more than 5,000 LPs — including albums by Zappa, King Crimson, and a solo Belew.

The sibs performed some Zappa tunes for Belew at their first meeting, "And that was it," says the guitar legend. "Something magical was there." Belew's old boss, King Crimson's Robert Fripp, dubbed Belew's new group "the trio of terror." "It isn't that we terrorize people," clarifies Belew. "It's that we surprise them with our intensity and power. They're so good at it. They sound like 50-year-old musicians. But they're so energetic. You can't get that out of a 50-year-old."

Belew should know — he's been trying to jump-start a power trio for most of the '00s. He didn't want to be in front of yet another group of solid but faceless backing musicians; he was dying to be part of an actual band made up of three distinct voices. Les Claypool and Tool's Danny Carey joined Belew on his 2005 CD, Side One, but they weren't about to leave their careers to join him full-time. Belew then tried working with jazz vets Mike Gallagher and Mike Hodges, but the fiftysomething musicians came to the conclusion that no one really had the initiative to commit to a permanent project.

It all came down to age. Old folks get set in their ways, become jaded, and have super-huge egos. The youthful Slicks, on the other hand, were eager to try anything Belew threw at them. "I can tell Eric, 'Tonight, you've got to play on bongos,'" says Belew. "But they aren't kids to me. They're very smart, gifted people, and very responsible."

Last year's Side Four Live caps Belew's Side series, which he's been working on since 2005. It features the trio performing cover versions of old Belew and King Crimson tunes. Taken together, the quartet of guitar-heavy and experimental CDs "represents all the stuff that has gone through my head in the last five years," says Belew.

But don't call it prog-rock; Belew has never been comfortable with that label. He thinks it's an old-fashioned tag that conjures images of cluttered '70s concept albums about dancing unicorns and malicious gnomes. He prefers to call his new trio's material "modern music." "One of the things that I picked up from people like Frank Zappa or Robert Fripp or David Bowie is that, if you can possibly form your own little corner of the world, that's the best way that you can go," he says. "Because you are the only person who has it."

The kids have sparked Belew, who has been plotting a new version of King Crimson with Fripp, bassist Tony Levin, and drummers Pat Mastelotto and Gavin Harrison, the latter a member of alt-prog combo Porcupine Tree. After Belew wraps his current tour, he'll join up with his old pals for a couple of high-profile gigs this summer. He also contributed guitar noises for something Trent Reznor put together late last year. Belew — who played on Nine Inch Nails' The Downward Spiral and The Fragile albums — is coy about the project. Or maybe he just doesn't have a clue about it. "[Reznor] was very secretive about what it was going to be," says Belew. "I didn't press him on it."

Belew says performing with people half his age "rejuvenates" him. At first, he feared "it would sound silly and look silly." But the guitarist recalls a time 30 years ago when Zappa lifted him out of obscurity, put him in a dress, and launched a career that's been exploring music's many different shades ever since. "I have a debt to Frank Zappa for discovering me and putting up with me for a year," he says. Now Belew is in position to be that "someone who believes in you." And he's relishing every minute of it.