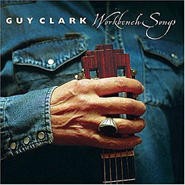 As an affable elder statesman of Texas' country-folk tradition, Guy Clark's effortless ballads make him a well-matched riding partner with such quintessential Lone Star songwriters as Townes Van Zandt and Kris Kristofferson. The strength of the been-thar-done-that observations on Workbench Songs lies in the fact that they're never softly nostalgic. While "Out in the Parkin' Lot," we sit beside Clark on the fender of his buddy's truck, enjoying warm cocktails of Old Crow and 7-Up, with Clark's detailed vantage snapping those scuffling cowboys in the warm neon glow into sharp focus.

And though there are times when Clark's pearls of wisdom get a bit hokey -- as on "Analog Girl" or, gulp, the Parrothead-friendly "Cinco de Mayo in Memphis" -- Workbench Songs is more earnest than curmudgeonly. On "Magdalene," the record's loveliest, Clark contemplates a life south of the border, singing, "I've heard Mexico was easy." But by the sound of these firmly rooted songs, the old bugger isn't leaving Texas anytime soon.