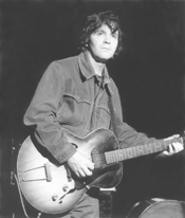 Singer-songwriter Tim Easton realizes the limitations of being categorized. He also realizes that he's been tagged by alt-country loyalists as one of their own. But he doesn't mind. Too much.

"I let the country influence me, and I'm not gonna try to be anything else than what I am," he sighs. "Once they get their ears around the new album, they'll realize it's hardly alt-country. Yeah, there's pedal steel on there, which is the most ultimate of country instruments, but we use it in a different sonic texture, and we use it differently than the usual weepy kind of way.

"I'm influenced by all types of music, but my heart is with Hank Williams, Johnny Cash, and guys like that."

Sounds like an apology of sorts, but Easton doesn't see it that way. There is a definite twang to his new album, The Truth About Us, but it's one that's ably supported by a dusty Americana that often strays from form. Little surprise, considering Easton's backing band on the record is Wilco's Jay Bennett, John Stirratt, and Ken Coomer, reformed alt-country players who have become one of America's best and hardest-working bands.

Still, the 34-year-old Akron native (while his parents still live there, he briefly lived in Columbus before moving to Los Angeles) is aware of the shackles, genre/boundary-busting be damned.

"People just have to have a label, don't they?" Easton says. "They have to put it into a category, because there is so much music out there now. There's an audience for everything. But there's truth to the fact about the lambchopped roots-rock weirdo guys who are out there, the kind of guys who want you to come home and do shots with them. That's kind of tiring after a while."

He's probably going to be getting a lot more of it soon. The Wilco guys are serving as his band during a brief tour that will take him to both coasts and a few larger markets in between. (There are also several solo acoustic dates scheduled, primarily promotional stops at radio stations and other media outlets. "I like to have some accompaniment up there," Easton explains. "But every now and then, it's nice to play solo, so I don't have to play the arrangements so strictly.")

Local alt-country band Rosavelt is backing Easton for the Cleveland and Columbus dates. ("I come back to my hometowns with no Wilco," Easton laughs. "They're busy being Wilco, making a record.") Rosavelt, which became friends with Easton after opening for him a couple of years ago, will also back him for his South by Southwest performance in Austin and his spring tour.

"We're basically his band when he needs one," says Rosavelt singer Chris Allen, who co-wrote "Half a Day," the opening track on The Truth About Us. "Tim's a very modern folk artist. He's really rooted in folk and blues, but it spills out into more rock and roll kind of things. Tim called one day, put the phone up to the receiver, and said, 'How do you think ["Half a Day"] sounds?' I told him it sounded great, and he said, 'That's Wilco. Jay Bennett's playing your part right now.' I was like 'Wow, that's great.'"

Easton's previous band, the Haynes Boys, opened for Wilco in Columbus a few years back. It was producer Joe Chiccarelli (Beck, U2, Bangles) who brought the band in for The Truth About Us. "I was very lucky to be able to work with them," Easton says. "They are some of the most creative and relaxed people I've ever been in the studio with."

The inspiration shows. The band's sonic shrewdness -- loops and Hammond B3 here, mandolin and 12-string guitar there -- boosts Easton's often gentle folk-rock songs, particularly the sprawling centerpiece "I Would Have Married You," a glorious epic of nostalgia and regret. And That Dog's Petra Haden, Victoria Williams, and Williams's husband, ex-Jayhawk Mark Olson, guest on "Don't Walk Alone," which is written by J.P. Olsen, formerly of Columbus's Beetkeepers. "When I saw them in college, that's when I wanted really to start playing music live and write songs," Easton says. "And it's a great song to close the album."

Easton says everyone involved in the making of the record offered input on the songs, which he gladly accepted.

"I started out wanting to make a weird folk album, somewhat like Van Morrison's Astral Weeks," he explains. "But that's gonna have to wait till next time, because it turned into a bigger production than that. I made 14 acoustic demos one day, right when I got to town. And it just evolved. Joe Chiccarelli got interested, we had some talks, he suggested Wilco as a backing band, and that pretty much changed everything about it. It became a whole new monster or ballgame, depending how you look at it."

Easton says he's happy with the way the album turned out, but is a little concerned about playing some of the songs live. "It might be difficult for me to reproduce some of it when I go out and play solo acoustic," he points out. "There are a lot of effects and loops and things. But I think you should make an album differently from your tour. Experiment a bit when you're in the studio. I have nothing against bar bands or the Ramones or anything like that, but they do it that way, and I do it a different way."

Easton's debut, Special 20, which came out a couple of years ago, was recorded with a group of Nashville studio musicians. Compared to The Truth About Us, it sounds sterile. Easton chalks up the creative evolution to natural maturity. "This is definitely a big leap from Special 20," he agrees. "I'm a pretty slow learner, though. If I go back to some of the first songs I wrote and how I'm writing now, it's a lot more coherent. And the songs have gotten a bit more sober. But the songwriting . . . I just let it happen. There's nothing I can think of or predict."

Easton says he hopes his audience, roots rock weirdos included, "connects with its own lives a little bit" through his songs, but adds that he has no expectations. He's a little more demanding of himself, though. "There are a lot of songs on the new one about coming and going, people with problems," he explains. "A song has to be finished for the sake of it. It might start with an autobiographical line, but it moves on and maybe borrows from someone else's life.

"I've grown by listening to different kinds of songwriters, from Townes Van Zandt to Jeff Tweedy," he says. "Before, it was all the Beatles and Stones filtered through whatever was going on in my life. It was a little bit poppy, a little bit folk. Now I just try to be a good songwriter and not try to steal too much from those who came before me."