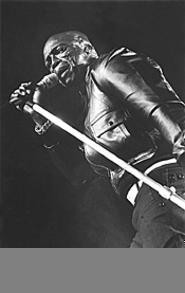 Fronted by Integrity mastermind Dwid, new hardcore troupe Sledgehammer has signed to Martyr Records, a New York-based label, whose roster includes releases from NYHC vets Madball and thunderous thrashers Murder Weapon. Sledgehammer's first release, an as-yet-untitled EP, is slated to come out in early 2004. The disc will feature six songs and a video for "London's Burning."

"Sledgehammer is more simplistic and really just written to have a good time," says Dwid of his new project. "Integrity is more complex and written from a more introspective approach."

While the pioneering Integrity famously rests on the shoulders of Dwid, Sledgehammer features a lineup of European hardcore all-stars, including Hans from Liar, Europe's longest-running straight-edge metalcore band. The two had been in touch for some time, and Dwid stayed with the bassist during Integrity's recent European tour. Hans had written some tracks and invited Dwid to participate. Mp3 demos are available at the band's website, www.sledgehammerhc.com.

When Integrity's current tour of the States and Mexico concludes, Dwid plans on returning to Belgium, to which the Cleveland vocalist has all but expatriated. He'll continue both groups, working with 'Hammer during Integrity's downtime. Integrity's latest release, the mini-LP "To Die For," saw the band eschew its recent electro-tainted stylings in favor of the crunchy riffs and harsh hollering that got them to the dance. The disc is garnering massive praise from the burgeoning cross-over community, and a sequel is in the works.

"When we started, there was no name for this type of music," says Dwid. "The term 'metalcore' recently popped up. It's a great time to be touring. I love playing music with my friends. Just like Willie Nelson, we are on the road again."

· Punk vets the Amazing Pink Holes are recording for the first time in 15 years. Director H.G. "The Wizard of Gore" Lewis, the B-movie auteur behind such splatter-pieces as Blood Feast and the new Blood Feast 2, reanimated the Cleveland combo to record the theme songs for two of his films, Moonshine Mountain and 2000 Maniacs. The tracks will appear on an enhanced EP, which will receive a limited pressing. Visit www.smogveil.com to order.

· Fast-rising Columbus jam band O.A.R. will stop by the Quonset Hut in Canton (3235 Cleveland Avenue N.W.) this Sunday, December 7, at 5 p.m. Fans who buy the band's latest, In Between Now and Then, will score a free poster that O.A.R. will autograph at the meet-and-greet. Get there early: In May, the band drew more than 700 people to an in-store at Westlake's My Generation.

· Cleveland hardcore favorite 13 Faces has posted a video for "These Bloody Hands," the bludgeoning title track from the band's debut LP, on its website, www.13faces.net. Johnny Blaze, the Akron director making a name for himself with the Starboyz extreme-biking videos, shot the clip. It features footage from a summer show at Scene Pavilion, intercut with live performances, footage of full-on pit madness, and the Cleveland skyline. "We're not a high-dollar band," says guitarist John Comprix. "And this is not a high-dollar video." But if you haven't seen 13 Faces yet, it captures what you've been missing.