There's nothing subtle about the laughs in Last Call's Corvette Summer. 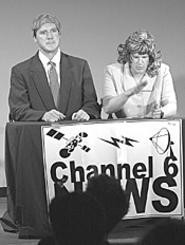 When it comes to stand-up or sketch comedy, wielding a sledgehammer can be pretty funny and sort of liberating -- just ask fans of Gallagher and Carrot Top. But it wears thin pretty quickly if more nuanced material isn't mixed in. This is where the talented comedy group Last Call Cleveland appears to be mired. Their new show, Corvette Summer, aims its guns at a series of familiar targets and blasts each into dust without ever using the team's inventive skills a little more dexterously. Consider this a lost opportunity, since each of these five performers has a unique comic presence that could soar, if he didn't just settle for the easiest, fastest gag.

Integrating live skits and video segments with characters and snatches of scenes overlapping from one medium to the other, the Last Call gang patches together a different one-hour show each night. On this evening, many of the laughs (and there were plenty) came from the rush of brazen confrontations.

Two smarmy TV anchors dislike their hapless, error-prone weatherman, so they insult him face-to-face, the male anchor spitting: "I'm sick of the lies coming out of that man-pleaser of yours!" A bit later, the meteorologist commits suicide. Then there's the TV-sitcom parody in which we hear that the loser doofus went on his first date and it didn't go well, so he murdered and bisected the girl and brought back a bag with half of her in it. Which half? "The best half," he smirks. Edgy or disgusting, one thing is certain: Comedy can't be sustained when multiple sketches are resolved in the most bizarre manner possible.

Fortunately, a couple of vignettes were quite funny without performers resorting to extreme punch lines. A video clip showed what might have happened in World War II if a platoon of cowardly soldiers fed off an equally lily-livered sergeant. And, in an office scenario, a beefy CEO sends love notes to a male employee, with other white-collar chaps giggling about it like schoolgirls.

But the lighter touch shown in those sketches was missing from the rest of the show. For example, when the performers set up the premise of the 10-year reunion of the Columbine High School class, they tumbled onto an idea rich with possibilities. But the Last Callers not only took the most obvious approach -- the former classmates ducking for cover from each other, until they can ascertain their safety -- they repeated it and then concluded on a lame, thoroughly telegraphed gag, as a weird guy reaches into his black trench coat and pulls out . . . a pen for them to sign his yearbook. Equally obvious were the monologue presentations of three disgruntled waiters, all recited at a breakneck clip by Mike Polk, with each server spelling out the multiple ways he disliked his job instead of acting it out.

Another bit, dubbed "The Man Who's Comfortable With His Body," was just odd, in that three men in a locker room were startled and offended by another guy wearing only briefs. But the worst instance of this troupe's "cut to the chase" comic approach was the final scene, when a cute young couple was ushered onstage and the five guys started singing various verses of "We Want to Bone Your Girlfriend" to the young man. Setting aside the unpleasant assumption that her sexual favors were his to dole out, the whole episode was cringe-worthy for its sledgehammer sensibility of pretty woman as ripe watermelon. Wham! Where's the plastic tarp when you need it?

It's too bad there wasn't more subtlety, because the performers have the chops to handle it. Slender Aaron McBride has a face like a startled fawn and is hysterically limber, casually executing a high kick in Abraham Lincoln garb. Polk possesses a sharp, clean delivery, and when he doesn't trip himself up in his rapid-patter segments, can build a laugh with the best of them. Jef Etters is solid if not showy, and Chad Zumock shows flashes of potential. Only Keith Carr didn't have enough chances to show what he can do, although his female TV anchor was amusingly prissy.

Oddly, some of the best comedy was not onstage but in the program, where each of the performers offers a humorous piece. There's a send-up review of the Chuck E. Cheese restaurant's animatronic stage show, written by Mike Polk as if it's a Broadway production, that's absolutely a stitch ("The characters move in a jerky and labored manner"). Here's hoping that Last Call Cleveland keeps putting shows together and starts working more characterization into their sketches while disdaining the shortcuts to easy (or uneasy) giggles. Once they do that, the laughs will go on for a long, long time.