Sunday, June 22, at the Beachland Ballroom. 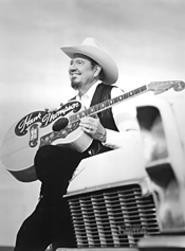 Unlike country contemporaries such as Hank Williams, Faron Young, and Lefty Frizell, Hank Thompson is not only alive but still touring. What's more, he's in surprisingly good voice. That's partly because, even in his prime, he was a singer of greater charm than pipes; his friendly, conversational baritone prompted listeners to sing along with such eventual classics as "A Six Pack to Go" and the embittered "The Wild Side of Life," or to laugh at their own misery in silly-but-not-kidding hits such as "Humpty Dumpty Heart" and "The Blackboard of Your Heart."

In the '50s and '60s, Thompson's secret weapons were the Brazos Valley Boys, one of country music's finest bands and one that forever blurred the difference between western swing and honky-tonk. Today, Thompson sings mostly with local pickup bands, and it's a lock that the one he fronts for during this show won't be up to the standards of his old outfit. Still, if he gets one that can swing hard, he -- and you -- will do the same.