The Tribe celebrates 10 years of ups and downs. 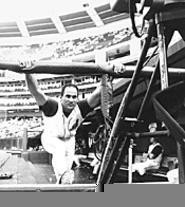 It's been 10 years since the Tribe played its first game at the Jake. And shortstop Omar Vizquel, the only player still on the roster a decade later, says that initial season still means a lot to him. "I look in the clubhouse and remember where Kenny [Lofton], Jimmy [Thome], [and Bartolo] Colon used to sit," he says. This weekend's Jacobs Field 10th Anniversary Celebration includes games against the Kansas City Royals and a bunch of giveaways (like a miniature stadium replica on Friday and a Memorable Moments poster on Sunday). "It's kind of tough, when you're used to seeing a full house every night and then to go to the stadium [that's] half or a third full," Vizquel says about the recent lean seasons. "But I feel more at home at this place than anywhere else in the world. I love this place." Game time is 7:05 p.m. Friday, 1:05 and 7:05 p.m. Saturday, and 1:05 p.m. Sunday at Jacobs Field, 2401 Ontario Street. Tickets are $5 to $40; call 216-420-4487. -- Steve Albanese

This year's political conventions may get all the attention, but attendees will go home with nothing more than a bunch of worthless buttons and maybe a silly hat -- nothing nearly as cool as a Todd McFarlane-designed LeBron James figure. For one of those, you gotta hit this weekend's National Sports Collectors Convention, billed as the country's largest sports memorabilia gathering. More than 700 dealers will be there, so "whether you're looking for something that just got released that day or for baseball cards from the 1950s," you'll find it, says Bob Williams, owner of Tradingcardcentral.com. There'll be plenty to gawk at too, including legends Jim Brown, Joe Namath, and Johnny Bench, who'll sign autographs. The show runs from 10 a.m. to 6 p.m. Tuesday through Saturday and 10 a.m. to 5 p.m. Sunday at the I-X Center, 6200 Riverside Drive. Admission is $12 in advance and $15 at the door; call 877-562-8466. -- Andrew McMillan

Long before corked bats, spitballs, and gazillion-dollar contracts, 19th-century baseball players actually followed a code of conduct. The gentlemanly game returns to Sunday's Akron Cup, with the Black Stockings hosting nine other vintage clubs from around Ohio. And 1860's rule book clearly spells out the set of regulations. For starters: Cussing, spitting, or anything else that offends a lady is worth a fine of up to a week's wages. Bring your checkbook or valuable livestock. Game time is 9 a.m. to 5 p.m. at Stan Hywet Hall & Gardens, 714 North Portage Path in Akron. Tickets are $12, $6 for kids; call 330-836-5533. -- Cris Glaser