From the wilds of Aurora, a veteran chef beckons. 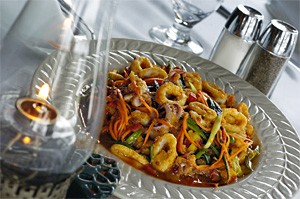 Can a big-city chef find happiness in a secluded cabin? Can sedate suburbanites learn to love a little "mojo" with their meals? So far, it looks like the answers are yes — if that chef is veteran Michael Herschman and that hideaway is his casually upscale restaurant in Aurora, The Cabin.

It helps, too, if those suburbanites are like the couple at a nearby table, moaning over the signature "sweet & spicy" calamari. Often imitated, never duplicated, the starter is a well-calibrated riot of assertive flavors — and one that many Clevelanders first discovered at Mojo, Herschman's trendy Tremont boîte, circa 1999.

Mojo shuttered in 2003. Herschman then bounced around the region for almost a year before landing at downtown's urbane Italian restaurant Vivo, where he served as executive chef and manager until last fall.

And now here he is in the suburbs, once more presiding over an Italian menu featuring crisp-crusted pizzas, saucy pastas, and entries like grilled veal tenderloin with creamy polenta and wild mushrooms. Management claims they've brought him on board to "kick it up a notch" — thus, items like the sassy calamari that give free rein to the chef's mastery of contrapuntal flavors and textures.

Take something as basic as the wild-mushroom pizza, now transformed into an epic union of darkness (in the form of amply applied fungi, pecorino, basil, and truffle oil) and light (here, in the sweet guise of crisp, juicy red grapes). Or consider the roasted Fundy Bay salmon, settled on a deliciously astringent bed of braised Belgian endive and arugula, then tweaked with cured olives (salty!), blood oranges (sweet!), and Marcona almonds (like crunchy bits of butter!).

On the other hand, there wasn't much exhilarating about the service, which traveled the gamut from slow-and-aloof to slow-and-well-meaning, with bits of negligence thrown in for good measure. On a weeknight, it took a haughty waiter two-and-a-half hours to serve three courses. During that time, he managed to ignore us, avoid us, and stick his heinie in our faces while taking orders at a nearby table.

And at a restaurant done up in white linens, with candlelight, two fireplaces, and a striking winter decor — complete with faux pine roping, tasteful fake snow, twinkling white mini-lights, and tiny stuffed teddy bears dressed for the hunt — shouldn't somebody stop by to crumb the table?

The slow pace did leave us time to enjoy the crusty Stone Oven bread and well-seasoned dipping oil, and to peruse Herschman's savvy wine list, with international options ranging from crisp Rieslings to giant California Cabs. Best of all, it contained plenty of intriguing options priced below the $30 mark, including our choice, the 2005 Plungerhead Lodi Zinfandel, an old-vines zin loaded with jammy fruit, balanced by notes of cinnamon and white pepper. For a wine pegged at $15 retail, the $27 restaurant price seemed eminently reasonable.

Plus, the zin made a memorable go-with for our double-boned, well-marbled Berkshire pork chop, a bronzed, wood-fired beauty with a piquant mustard-seed and cider glaze. A saucy accompaniment of garlic confit and Granny Smith apple slices, garnished with pancetta and finished with cream, added armfuls of cold-weather panache.

Entrée possibilities for another wintry day included New Zealand lamb chops, prosciutto-wrapped chicken, and filet mignon. Probably, though, we won't go the pasta route again after a generous portion of bow-tie farfalle in a mellow pork-and-veal bolognese came to the table both slightly overcooked and well below serving temperature.

For dessert, in-house choices include freshly baked cheesecakes and chocolate torte, along with sorbets and several offerings from Cleveland's Seballos Pastries, including our pick, the vanilla panna cotta. While the flavor was wholesome and pure, the texture was more bouncy than creamy. Luckily, it was mostly rescued by generously apportioned garnishes, including a giant sliced strawberry, a handful of ripe blackberries, and a warm dollop of caramelized pear slices, bursting with buttery goodness.

So is the urbane Herschman truly happy out here in the hinterlands? He swears that it's so. There's no doubt about Herschman's fans, though: For a taste of his culinary mojo, happy foodies would follow him anywhere.