Soderbergh shoots in digital and hits the target: Hollywood. 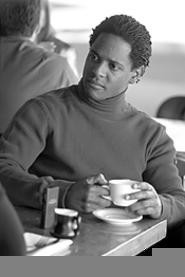 As George Clooney says in Ocean's Eleven, do the math: four Canon XL1 digital cameras, one dual 800 MHz Power Mac G4, a copy of editing software Final Cut Pro 3, 18 shooting days, a two-million-buck budget, one Oscar-winning director, and nine high-profile actors (among them Julia Roberts, Brad Pitt, David Duchovny, Catherine Keener, and David Hyde Pierce) who drove themselves to the set, did their own hair, brought their own meals, improvised most of their scenes, and worked for pennies on the dollar. It all adds up to the kind of guerrilla-style project in which a former indie revolutionary indulges himself after a string of big-budget movies (Erin Brockovich, Traffic, Ocean's Eleven) and a golden statue on the mantel -- a goof (and goof-off) only masquerading as "return to roots."

That doesn't diminish the copious rewards of Steven Soderbergh's wry and capricious Full Frontal, but don't confuse it with High Art (or even low art). It's too fun and too full of itself to take seriously, seeing as it includes Nazis doing the pop-and-lock and Brad Pitt playing Brad Pitt playing Brad Pitt in a slick and dopey Se7en remake. Rather, it's Soderbergh, a filmmaker equally adept with the frivolous and the high-minded, copping a Kevin Smith, rounding up his pals for a movie about a movie about a movie . . . about, dear God, a movie. In other words, this is the send-up Jay and Silent Bob Strike Back aspired to be -- funded, even, by the same studio (Miramax), which itself long ago became parody anyway.

By the time Jeff Garlin, who plays Larry David's manager on HBO's Curb Your Enthusiasm, shows up, playing Miramax honcho Harvey Weinstein, the whole thing reeks of an in-joke of which only a handful will get the punch line. Not that there is much of a payoff, because the delight one takes from Full Frontal isn't in the sum, but the parts -- most notably one rather erect private part sprung like a tent pole from Duchovny's lap. Those who would insist this is Soderbergh paying penance after cashing the majors' paychecks miss the point. This is less a sequel to Sex, Lies and Videotape (as was often insisted during its shooting) than it is a half-nasty, half-loving send-up of what that film begot: cheapo movies by indulgent directors, shooting outlines and archetypes rather than fully realized stories with fleshed-out characters. If Soderbergh is the daddy of modern-day indie filmmaking, Full Frontal is where he straps the kid to the sacrificial altar.

Myriad characters, all tied somehow to the entertainment business, wander around Los Angeles during a single day and wind up on the L'Hermitage hotel rooftop for the 40th birthday of movie producer Gus (Duchovny). Full Frontal plays like Soderbergh's Short Cuts (or his The Player), his Magnolia, his L.A. Story, or Grand Canyon even: A gangbang of celebs play Regular Folk and Real Famous trying to figure out the Meaning of It All, only to discover there's no significance to anything they touch. That's because deep down, there is no deep down to any of these people; they're shallow, hollow, self-important, vain, and utterly delusional. And none of them exists, because, as Soderbergh keeps reminding us, this is only a movie. Or, actually, three movies in one. Maybe more -- it's hard to tell, but fun to guess.

There's Francesca (Roberts), an actress who forces her personal assistant to break up with her boyfriends for her; Carl (Pierce), a writer for Los Angeles magazine, who envies the homeless their full heads of hair; Lee (Keener), Carl's wife and a human resources exec, who hilariously humiliates those she's about to fire; Calvin (Blair Underwood), an actor making a movie in which he plays . . . an actor; Arty (Just Shoot Me's Enrico Colantoni), a playwright-actor looking for Internet love; and Linda (Mary McCormack), Lee's sister and a masseuse who refuses to provide a "happy ending." Add to the mix a neurotic local-theater Hitler (show-stealing Nicky Katt), two filmmakers playing filmmakers (Soderbergh and Fight Club's David Fincher), a real-life movie producer (Ocean's Eleven's Jerry Weintraub) playing a malicious magazine editor, and Terence Stamp playing himself and his character from Soderbergh's The Limey, and you wind up essentially with two mirrors facing each other -- an endless reflection of a reflection, a funhouse ride that goes on forever.

Full Frontal is so self-referential, it ought to come with footnotes. Soderbergh, working loosely from a script by first-time writer Coleman Hough, not only sneaks in references to his own works, but allows the actors to comment on their own films and their thoughts on The Biz. As a result, you feel like you're watching a movie review. In one scene, Underwood delivers to Roberts a rap about what it means to be a black actor, and he digs his sharp point into her side by referencing the fact Denzel Washington and Roberts never kissed in The Pelican Brief: "Can even Mr. Washington briefly be seen kissing a Pretty Woman underneath a Pelican Moon?" But Roberts isn't playing Roberts, just an actress who looks like her; she keeps a straight face, while a knowing audience titters. We get the joke, because that's all Full Frontal is: a brilliant gag at the expense of those who paid for it and those who pay to see it.