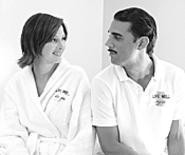 If for no other reason, Happy Endings deserves a soft spot in our collective hearts for rescuing Tom Arnold from the where-are-they-now? scrap heap. The former Mr. Roseanne Barr plays Frank, a widower who falls for and sleeps with his son's conniving, would-be girlfriend Jude, played by Maggie Gyllenhaal. And though he's a bit player in a rather enormous and potentially unwieldy ensemble, Arnold is a revelation. For years he has stumbled through a career, playing the butt of a joke nobody's bothered to tell him, but here he actually makes us root for him, not simply laugh at him. Arnold even seems small in this movie, as though his pitiable lot in life has rendered him half his actual size.

Frank's a wealthy man, whose enormous home is populated only by his slacker son, Otis (Jason Ritter), who locks himself in his room to jerk off to pilfered surveillance-camera footage of his boss, Charley (Steve Coogan); still, Otis keeps fooling himself into believing he's straight, hence his one-night fling with Jude. Father and son can barely look each other in the eye; theirs is a relationship conducted through conversations aimed at the floor and through glances directed at the exquisitely appointed furniture. Father and son, like most of the folks in need of the movie's promised happy endings, are bound by their loneliness.

But in a film populated by liars and schemers and frauds, Frank's kidding only himself: He sees in Jude, who's carefree and yet older than her years -- and who sings torch songs as if she invented fire -- a chance at redemption, or perhaps merely love, and seizes the opportunity to lavish upon the heartbreaking huckster a world of wealth. If it provides only a momentary respite from his humdrum life, so be it; if it means a chance to roll in 400-thread-count Egyptian sheets with a warm, lithe body, fine with him; and if it offers a chance at real love, even better still. The audience knows well in advance that Jude's offering only a phony kind of love -- writer-director Don Roos announces each character's intention with title cards that read like snarky asides and function like footnotes -- but we also feel somehow satisfied that Frank, for the moment, is taking from her as much as she's swiping from him. And besides, this is a movie that delivers on its title's promise; it's Kill Bill without the swordplay. Frank, and everyone else, will emerge from Happy Endings all right, after all.

Some, of course, will be more damaged than others, and there are plenty of folks left from whom to choose: Mamie (Lisa Kudrow), an abortion-clinic worker whose teenage sexual encounter with her stepbrother, Charley, left her with a child no one knows about, whose whereabouts remain a secret even to her; Nicky (Jesse Bradford), the aspiring documentarian who tries to blackmail Mamie with the location of her kid; Gil (David Sutcliffe), Charley's lover, who has come to believe that his lifelong pal, Pam (Laura Dern), secretly used his sperm to have a child with her lover, Diane (Sarah Clarke); and Javier (Bobby Cannavale), the masseur pretending to be a sex worker and more, but who is in fact a lot less than he appears. It is though after making The Opposite of Sex, about the fine line between true love and double-cross, Roos decided it wasn't enough to have one hypocrite or charlatan in his movie, but several; there's barely enough room in these 128 minutes for all his characters to breathe, much less speak.

Happy Endings plays something like the sexually disoriented version of Paul Haggis' Crash, another ensemble film in which, it turns out, only 13 people live in Los Angeles and they all seem to know each other. But where Crash hurls itself at the audience, shouting a tirade laced with racial epithets, Happy Endings flings itself at you like a loser who wants desperately to be loved. That's especially true of its male characters, who whine and pout in ways their female counterparts would shrug off as weakness.

Yet Roos, whose last movie, Bounce, amounted to little more than loving close-ups of Ben Affleck trying like hell to squeeze out a tear, doesn't abandon or betray his creations. He adores them -- even if he doesn't quite respect them or their motivations. Nicky, especially, comes off as a creep, a hirsute hipster weaseling his way into Mamie's life by holding over her the secret of which she's genuinely ashamed. But Roos doesn't condemn him; the filmmaker merely reveals him to be a lost, sad, desperate soul -- a guy using someone else's secret to mask his own. Nicky's like everyone else in Happy Endings, broken but salvageable, which is what happens when an eternal optimist makes movies about misanthropes who desperately want to love and to be loved.