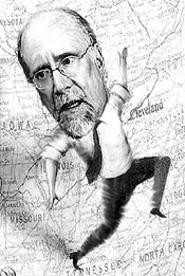 Donald Schulz won't talk about his case -- and it's hard to blame him. The Cleveland State political science professor once shared a 19-page government document with a reporter, on the condition that she not publish its contents. The reporter published anyway. It was Schulz who got slapped with the lawsuit.

It taught him to be careful with the media. So he will talk only generically about his experience in Litigation Hell. "The toll has been enormous," he sighs. "Financially. Personally."

Insomnia haunted him throughout the first year of the case. He's seen a doctor about chest pains and hypertension. "During the last two years, I can tell you that not a day has gone by I didn't think about it," he says. Schulz has had to plunder his retirement funds to pay for his defense. He's $80,000 in the hole. "My lawyer keeps telling me I can't afford a defense," he says with a wry laugh. "I know that."

On the other hand, the bank owned by the Hanks can afford a top-flight offense. Carlos Hank Gonzalez and his two sons, Carlos Hank Rhon and Jorge Hank Rhon, constitute a family triumvirate that is to Mexico what the Rockefellers were to America. When Hank Gonzalez died in August 2001, he left the billion-dollar corporate empire to his sons. Today, Jorge runs the family's racetracks and betting parlors in Tijuana, while Carlos runs everything else -- including one of Texas's biggest banks, a Mexican construction firm, and a giant telecommunications company.

These same Hanks were the targets of a massive federal investigation into drug trafficking, named Operation White Tiger. The 19-page document Schulz gave to a reporter led to articles disclosing the probe.

In August 2000, the Hank-owned Laredo National Bank and its CEO, Gary Jacobs, charged that Schulz had "infiltrated" the federal agency that authored the White Tiger report, and that he had fed investigators "bogus 'intelligence,' disinformation, and falsehoods." Jacobs and the bank sued Schulz for invasion of privacy, racketeering, defamation, and tortious interference.

When Scene first wrote about the case ["White Tiger Unleashed," May 17, 2001], the Hank camp predicted that their suit would expose Schulz and his co-conspirators, that White Tiger would prove to be tainted with lies. Hank family attorney Ricardo Cedillo said he was "very confident that I will have damages in excess of $100 million." Best of all, the Hanks would have their good name restored.

Two years later, court files show that they've found next to nothing. Federal agents haven't corroborated the claim that Schulz meddled in the operation, and there is no hint that Schulz conspired with Hank enemies. In October, a federal magistrate issued a stinging rebuke, denying a Hank demand to question government agents and review federal documents. The magistrate also questioned the very basis of the suit. If anything, the absence of evidence in the conspiracy theory has begun to lend support to the government's original theory, which asserts that the Hanks are the drug trade's corporate sponsors.

In 1999, Schulz was working as a research professor at the Army War College in Carlisle, Pennsylvania, a position that entitled him to interview government agents about classified operations.

Schulz in turn furnished the report to Dolia Estevez, a reporter for the Mexican newspaper El Financiero. Estevez cited a government report in her May 31, 1999 article about the U.S. investigation of the Hanks. Days later, White Tiger was exposed in The Washington Post and Dallas Morning News.

Mexican author José Martinez also published reports in his 1999 book on the Hanks, Teachings of the Professor. The documents Martinez cites indicate the evidence against the Hanks was largely circumstantial: The family owned a large stake of TMM, a shipping company whose freight containers had been twice found to be carrying cocaine -- 8,705 pounds in a 1990 seizure, 2,517 pounds in a 1997 bust. The Hanks also once owned TAESA airlines. The report cites Drug Enforcement Administration sources indicating that "large narcotics seizures took place on numerous registered flights from TAESA in Mexico."

Robert Siegfried, a spokesman for Carlos Hank Rhon, says that although the family owned interests in TMM or TAESA, it didn't at the time of the busts.

At the time the documents were made public, Hank Rhon had been seeking approval from banking regulators to purchase another chain of Texas banks. Rumors of Laredo's money-laundering, which were cited in El Financiero, didn't help his cause.

Laredo CEO Gary Jacobs, whom the White Tiger document called Hank Rhon's front man in America, hired former New Hampshire Senator Warren Rudman to lobby the U.S. Department of Justice, which supervised the narcotics probe. Rudman succeeded in getting Attorney General Janet Reno to issue a letter stating that the report "had not been properly reviewed and that [she] could not endorse its conclusions as reported in the media." She also stated that the project was "terminated."

This seemed to mean that the Hanks were safe from criminal charges. The family could have quit while it was ahead. Instead, it sued Schulz, hoping to prove the very content of White Tiger false.

The complaint alleged that Schulz was in cahoots with journalist Estevez, a New York banker and journalist named Christopher Whalen, and a Chagrin Falls attorney named Walker Todd, who is a friend of Whalen. (Whalen is also being sued by Jacobs and Laredo for allegedly sabotaging the Hanks' bank purchase.)

But Estevez has refused to testify in the case, and a U.S. magistrate in Virginia quashed the subpoena, calling it "nothing more than a fishing expedition." Whalen and Todd claim that they've never spoken to the professor, and no evidence has turned up to suggest they're lying. Hence, the conspiracy part of the Hanks' theory is suffering.

The other critical charge -- that Schulz inserted lies into White Tiger documents -- has also met a dead end. In a deposition, Ronald Strong, an official with the National Drug Intelligence Center, confirmed that Schulz was "briefed regarding the NDIC's Mexico Project," but he gave no indication that the professor had influenced its findings.

The most Hank attorneys have found is that Schulz mailed to NDIC agents a manuscript he was writing about narcopolitics in Mexico, but it appears that his purpose was to check facts. NDIC Agent Daniel Huffman testified that he merely offered comments on the manuscript and sent it back.

The more the Hank attorneys pressed the government for information, the worse it got for their clients. The biggest setback came last July. They had been demanding a look at the White Tiger document when Rogelio Guevara, the DEA's chief of operations, swooped into the case. Guevara warned that releasing the White Tiger report would "significantly compromise DEA's ongoing criminal investigation."

The key word there: "ongoing." It was thought that, by lobbying Janet Reno, the Hanks had succeeded in having White Tiger shut down. But Guevara's statement suggested it may be alive after all. If so, the Hanks are back where they started -- publicly exposed as targets of a federal investigation.

Attorneys for Jacobs and the bank demanded that Guevara's declaration be struck from the record and reiterated their demand to see the report for themselves. This only led to another defeat when, on October 25, U.S. Magistrate Nancy Vecchiarelli recommended that Guevara's testimony remain on record and that the bank be denied access to White Tiger.

Worse, Vecchiarelli questioned the very grounds for which Laredo sued Schulz. "Laredo has not discussed the merits of a single claim of the complaint or the elements necessary to prove a single count -- or even made a colorable showing that its claims are not frivolous," Vecchiarelli wrote.

Vecchiarelli's missive was the most promising sign yet for Schulz. But federal Judge Lesley Brooks Wells gets the final say, and she is still reviewing the file.

It seems that Schulz's best hope is for Wells to dismiss the case, because the Hank side shows no sign of walking away. "There are relationships [between Schulz and co-conspirators] that we feel will come to light as this case goes to trial," says Siegfried. "We hope to show an inappropriate effort by Schulz and others."