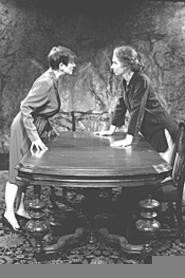 "Love conquers all." According to countless pop lyricists, TV-series scriptwriters, and preteen girls who dot their i's with little hearts, love makes the world go 'round -- and deep, unconditional love can transform the universe. But eventually the music stops, the series is dropped, and the sparkly ballpoint runs out of hot pink ink. And we're forced to face the reality that love, however genuine, is just one more mutable illusion leading us to our personal endgame, the moment when we must face absolute truth alone.

This idea, along with a gaggle of others, is addressed in David Hare's richly textured Amy's View, presented with sublime professionalism by Dobama Theatre. Even though Hare overloads his script with an excess of thematic thrusts -- the definition of art, the devastation of loss, and the twisting torture of mother-daughter relationships among them -- the result is powerfully engaging. This is due in large part to director Sonya Robbins's fine cast and a final scene that is the equal of any, in terms of its stark honesty and quiet intensity.

Spanning 16 years, four acts, and one intermission, Amy's View brings us three complex Brits whose lives are headed in remarkably different directions. At the beginning, Esme is a well-known fiftyish stage actress, noted for her subtle and genteel characterizations ("Layers, I play lots of layers"). But she's an edgy and judgmental mom when she's with her grown daughter, Amy, who, as a girl, wrote odes to love in her diary pages. Amy's fixation with l'amour has blossomed into an affair with Dominic, an ambitious quasi-journalist who cranks out cheesy interviews with film stars in an attempt to network his way up the cinema food chain. Predictably, Esme and Dominic lock horns over their preferred artistic endeavors, with Dominic mocking the slow-footed tedium of theater ("He's crossing the stage -- just jump-cut it!").

Also on hand are Esme's elderly mother, Evelyn (Ursula Korneitchouk), who is sinking gradually into mute dementia, and neighbor Frank (a blissfully disingenuous Robert Hawkes), a man who neatly and nefariously compartmentalizes his tender feelings for Esme from predatory business practices that lead her into a financial hellhole. Esme's dislike for Dominic, personally and professionally, is further aggravated when Amy reveals to all that she is pregnant. As time passes, Dominic's movie career soars, while Esme is eventually relegated to playing a nurse in a TV hospital soap opera. This is the point in the play where, oddly, all of playwright Hare's strengths (incisive dialogue and trenchant cultural observations) collide with his flaws, which include a fondness for convenient, offstage events to torque the tension higher and an overly comprehensive litany of issues that touch on the leveraging of power, honesty, artifice, and even an implied political commentary on Margaret Thatcher's economically egregious England.

Fortunately, the Dobama players weave this giant hairball of schemes into a rich skein of ideas. Catherine Albers is intriguing as Esme, evolving from an energetically arch diva, plump with confidence, to a stripped-bare nerve ending. She is more than matched by Derdriu Ring's Amy, the idealistic woman who's furiously trying to patch together her mother and her lover, even as her own relationships with both disintegrate. The scenes between Albers and Ring resonate with believability, as the actors convey the leap in years between acts with seemingly effortless changes in posture and attitude. Also exceptional is Todd Krispinsky, who avoids stereotyping this underwritten Tarantino-style character by nailing his laugh lines and not leaning too hard on his nasty side.

But the real treat is the last act, where we finally see Esme with all her defenses down. As Albers ironically wipes off her makeup in preparation for going onstage, we feel her removing all those layers. And her advice to a young actor (played with beautifully contrasting freshness by Tom Weaver) about "getting down to the core" is demonstrated in her final confrontation with Dominic. Here we have the showdown between two art forms (theater and film), two life philosophies (contemplative and retentive vs. showy and expulsive), and two people who express perfectly Hare's observation that "We are what we do." Dominic is happy garnering fame with movies featuring violence ("We call it action") and exploding craniums. And even with everything taken away from her, Esme goes forward too, playing her role. Combined with the earlier image of poor Evelyn slumped in her wheelchair, Esme's resolve makes us see that reality is often, sadly, a slow and inexorable regression from the real.

Director Robbins is to be saluted for a spectacularly involving production. And thanks to some set design legerdemain by Michael Louis Grube, the show rings out on an image and a line that could fuel conversation and analysis far into the night. Is there any better feeling with which to leave a theater?