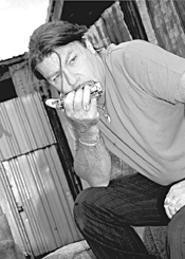 Well, if a guy who's a blues-harmonica whiz wants to get by with just one name, "Harper" is a better fit than most. And if Perth, Australia doesn't automatically evoke the blues the way Memphis or the South Side of Chicago does, at least it's a place where the records of the masters could be found, and the young British transplant apparently made the most of this discovery from the age of 10, when his family relocated there.

While his primary influences are predictable -- harp deities Little Walter and Sonny Boy Williamson II -- Harper's own voice hardly is. Sonny Boy's gutbucket rhythm remains at the root of his style, but Harper is capable of quick-time, sure-footed stratospherics that have drawn well-deserved comparisons to harmonica monster Sugar Blue of the Rolling Stones' "Miss You" fame. Less predictable yet are the sly jazz and funk components and the traces of indigenous Australian music that populate the man's originals. The engaging mix of uptown and back-home elements topped by dynamite harp work found on 2005's Down to the Rhythm sends the message that this Aussie is not your average didgeridude.