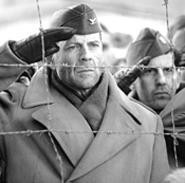 Hart's War, like most mediocre films, is little more than a movie about the movies. Set in a POW camp during the final months of World War II, it owes much of its existence to far superior films, chief among them La Grande Illusion, Stalag 17, and The Great Escape; the enormous shadow those three films cast hovers over the entirety of Hart's War, like the blanket of gray clouds and muddy snow that envelops the camp grounds. Gregory Hoblit's picture sifts through their ripe remnants to salvage their meatiest and weightiest elements: the social-class commentary of Jean Renoir's 1937 La Grande Illusion, the POW camp camaraderie of Billy Wilder's 1953 Stalag 17, the jailbreak thrills of John Sturges's The Great Escape a decade later.

Everything about it feels borrowed and haggard, and it lurches along like a Frankenstein monster. Hart's War plays the way its inmates look -- exhausted, fetid -- and it drags on and on, as endless as war itself. But it's not content just to exist as POW camp drama; it's also a courtroom thriller, a John Grisham adaptation set behind enemy lines. Based on John Katzenbach's 2000 novel, it reminds one of A Soldier's Story or A Few Good Men, short a few good men behind the camera.

It doesn't offend as much as it bores; Hart's War is a noble failure about noble failures. Like all war films, it wants to extol the virtue of the hero, accidental or otherwise, but it bandies about words like "honor" and "dignity" and "sacrifice" without much emotion or resonance; they're uttered like words on a page, like catchphrases without implication. That's because, within the confines of this barbed-wire world, everything right seems to be done for the wrong reasons, and it's impossible to root for even the most honorable soldier -- at least till the end, by which time we're so uninterested, it's impossible to muster any concern at all.

Commanding the troops in confinement is Colonel William McNamara (Bruce Willis), a fourth-generation West Point graduate who itches to get back to the battle; he's no William Holden, content to ride out the war by bartering for booze with the German guards. Willis plays McNamara as he does all his "serious" roles -- with the silent scowl, his face twisted into a knot that suggests only discomfort, not authority. He's the antithesis of his German counterpart, Colonel Werner Visser (Marcel Iures), a soldier educated in the States, where he picked up his love for "Negro jazz."

For a little while, at least, McNamara has no use for Lieutenant Tom Hart (Colin Farrell), a coddled, Yale-educated senator's son captured while driving an officer to the front lines. (In the book, Hart was the only survivor of a downed plane; screenwriters Billy Ray, Terry George, and an uncredited Jeb Stuart give him a soft desk job, perhaps, to underscore his status of privilege.) McNamara suspects Hart is weak and untrustworthy -- a spoiled brat who, the colonel suspects, gave away the location of Allied fuel depots to keep from being tortured.

McNamara banishes Hart to the enlisted men's barracks, where he's tolerated by the soldiers, chief among them violent racist Sergeant Vic Bedford (Cole Hauser, in the Holden role as chief barterer) and Sergeant Carl Webb (Rory Cochrane, Hauser's Dazed and Confused castmate). When McNamara bunks two black pilots -- Lieutenants Lincoln Scott (Terrence Howard) and Lamar Archer (Vicellous Shannon) -- with Hart and his men, he does so solely to toy with Hart, who's forced to protect the Tuskegee Airmen against the racist soldiers now under his command, such as it is.

Before long, two soldiers are killed: Archer is gunned down by German guards, after a weapon that's not his is found in his bed; Bedford is found strangled, perhaps by Scott in retaliation for the framing of his friend and comrade. McNamara insists upon a court-martial, to which Visser agrees with smirky bemusement: "Like in your American movies! That should be fun." It's the most prescient line in a film bogged down by its heavy-handed proselytizing.

Hart's assigned to defend Scott, but finds himself a pawn of both commanding officers: He's loyal to McNamara, an American soldier, but has more in common with Visser, also a Yalie with refined tastes. But Hoblit is no Renoir (or Sturges), and his attempt at class commentary is clumsy and jumbled. Worse, the film degenerates into a benign whodunit bereft of suspense; even the film's trailer has little interest in hiding its true intention. Ultimately, Hart's War can't decide what it is: treatise on racism, escape (and escapist) thriller, or murder mystery. So it sits there, waiting for something to happen, a prisoner of its good if ham-fisted intentions. And we sit there with it, waiting and waiting. And waiting.