What's it like making the online world laugh? Funny you should ask 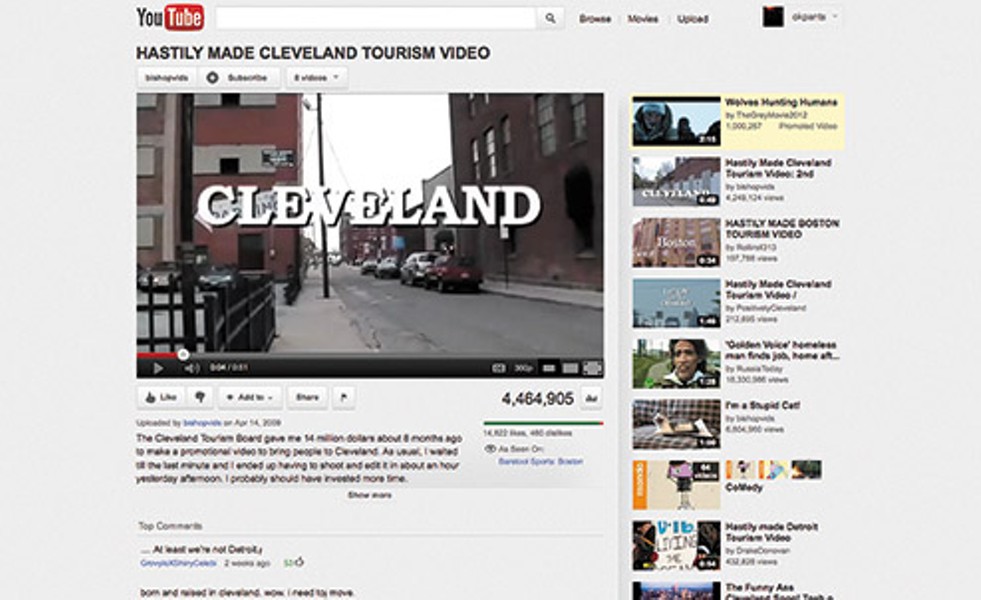 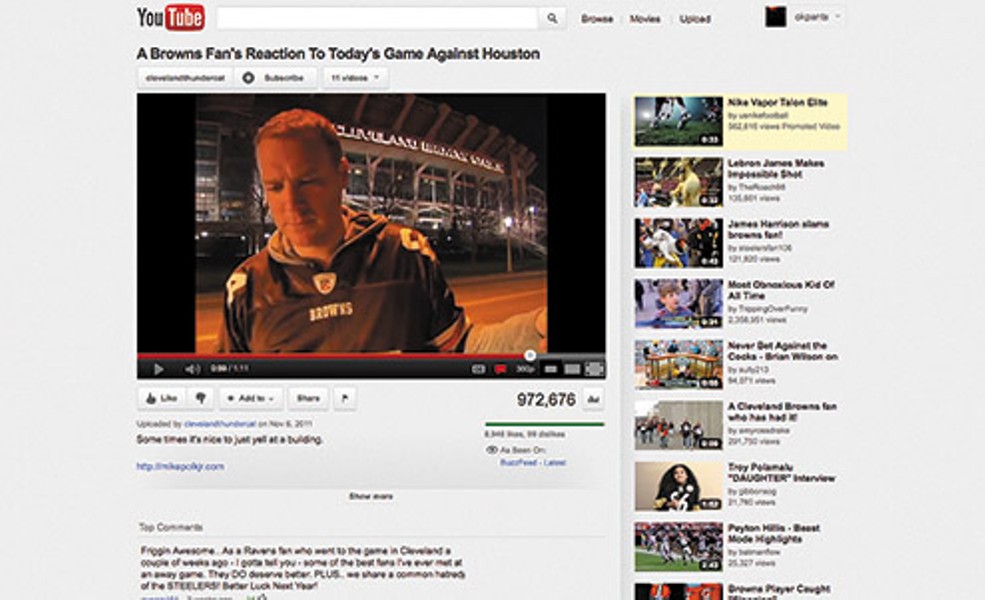 "You have no idea what a chubby little cash cow you are," Mike Polk says to his housemate.

this food sucks but I don't even know it

and the guy throws it out for me.

The internet loves cats, and the internet also loves to mock people who love cats. And so "I'm a Stupid Cat" was a natural hit on two fronts: almost 7 million clicks on YouTube and counting.

It's just another notch on Polk's internet résumé, which has been collecting zeroes — pageviews, not dollars — for quite some time now, all beamed out from the 34-year-old ginger-haired comedian's Lakewood apartment. That's where the four-pawed performer in Polk's viral video is currently scampering around, blissfully unaware of his fame.

Of course, Macduff really isn't that big a cow: 7 million clicks are worth a lot less than you'd think — though one guy did offer Polk $1,000 each to make three more identical cat videos with similarly nonsensical, vulgar lyrics. "He e-mailed a couple of months ago, but I'm just getting around to thinking about it," Polk says. "I'm not very financially motivated."

Polk works for Break Media, an L.A.-based online property that rakes in dough mainly from videos — original and otherwise — be they songs or sketches or clips of babies sleeping in watermelon. His role there is two-fold: He writes ad copy for products like Mike's Lite Hard Lemonade when those companies buy ads on Break, and he works with a creative team on original, funny stuff.

But "I'm a Stupid Cat" wasn't for Break. Earlier this year, Polk restructured his deal, taking a "big" pay cut in exchange for the freedom to make stupid cat videos and other nonsense on the side. There are just too many ludicrous ideas in that head of his, and restrictions are kind of a downer.

Polk's done plenty of popular work for Break too, and before that for HBO Labs, a digital creative division of the cable powerhouse that was bought out by Break. Along the way, Polk was behind the videos "One Semester of Spanish Spanish Love Song" (6.8 million views), "Ooh Girl, an Honest R&B Song" (9.3 million views), two "Hastily Made Cleveland Tourism Videos" (8.3 million combined), and a host of other series, sketches, one-offs, and vids with a more local flavor. ("LeBron James Is a Bitch," anyone?)

Then there are his continued efforts with Last Call Cleveland, the sketch group he co-founded at Kent State University more than a decade ago that continues to perform locally and nationally. He also does stand-up and humor writing.

So what is he doing here, some 30 million views later, in his Lakewood abode, with its wood-paneled living room walls decorated with pictures of family and friends and Terminal Tower and the old Municipal Stadium? Why not live in, say, L.A.?

"I wish it were more complicated — this is a boring story — but I have a decent job now that gives me a lot of freedom and lets me move at my pace. I love Cleveland. I really do. I've been here a long time, I have a lot of family here," he says, referring to his parents in Westlake, his two sisters in Lakewood, and the girlfriend who "ain't dumped me yet."

"I'd move if I had to — say, if I got fired. Luckily I don't have to. And it's not as pressing to move somewhere else with what I do.

All right, then. What's next?

"Want to go to the thrift store? I can drive."

The Unique Thrift on Lorain has made appearances in Polk's stand-up act before: "My favorite day is Mondays, because that's half-priced Mondays. If you're a people watcher, and you thought there were some interesting cats normally milling about, do yourself a favor and go on Monday and check out the people who don't want to pay retail thrift-store prices. Check out the guy who was there on Wednesday and says, '$1? For a suit? I don't think so, assholes; I'll see you on Monday.'"

On this late-autumn evening, Polk is here for two things: a suit for his Art Garfunkel Halloween costume and a bike helmet for a bit in a new clip-type, Soup or Tosh-esque web series he's doing for Break that debuted in December.

Polk's previous big web series, "Man in the Box," was a long-running spin on the average cubicle dweller's life. It was the first original scripted work Polk did for HBO Labs, who found him through The Phat Phree, a humor-writing collective including former Last Call member and current Alan Cox Show co-host Chad Zumock. Polk's "Look at My Striped Shirt" essay, a hilarious and vicious parody of the Red Bull-chugging bro culture of West Sixth Street, caught the eye of an HBO Labs honcho.

"I literally came home drunk one night from West Sixth after enduring it and wrote that really drunk," Polk says. "There were misspellings, I didn't remember writing it the next day. It was a mess. But then it started getting kicked around."

That bit of self-deprecation is typical of Polk. Everything is explained with the basic, rehearsed gist of Ah, it's nothing, I was just fucking around. From the production values on his homemade videos to his explanations of the stroke of genius that birthed them, the theme is the same: It's all hastily made.

The cat video: I was just filming my cat.

The "Hastily Made" franchise: I just pointed my camera around and said some bullshit over it because my friend needed a video that night for a show.

All anyone around him can talk about, however, is how smart and hard working he is.

"I read a lot of writing, have seen a lot of things, but Mike has that distinct voice," says Fran Shea, the onetime HBO Labs boss who discovered him. "His writing is tight, it expresses different ideas, it's all very strong, and you can tell how very directed he is."

Former Last Call member and former Scene staffer James Renner: "He has studied comedy. He works very hard on it."

Danila Koverman, VP of the Creative Lab at Break: "For as whacky as comedians' reputations are, he's wonderfully dependable, hits deadlines, and is very productive."

Polk, it seems, tries hard to fight that perception. After the tourism videos went viral, he did interviews on his front porch wearing a bathrobe and holding a bottle of whiskey when the local news cameras showed up.

"They wanted to meet me here, there, in front of Tower City, whatever," he says. "I told them, 'Come over here if you want.' So I was just sitting in various states of undress while these poor reporters — they have no clue to begin with — they have no idea why they're there. It was probably a little dickish."

It was sort of dickish, but it also upheld an image.

If Polk suffers from one other overriding perception besides the I'm just fucking around, anyone could do this look of his videos, it's that he's a Cleveland comic. Not a comic from Cleveland, but a comic most adept at making people who know Cleveland laugh.

That's not true, of course — his body of work disproves it. But it's a perception nonetheless. "Mike Polk's act is extremely local," fellow comic Michael Ivy once said of him. "I could wrap up his act in one line: 'Boy, Parma sure makes Willowick look like Brunswick, right? Am I right?'"

But whatever local mining Polk does has also scored with viewers far and wide. For one thing, he's responsible for creating the single most enduring moment from the 2011 Browns season. It was this simple phrase: Factory of Sadness.

It hadn't even existed in the Browns fan's lexicon until a few weeks into the season, when Polk posted a video of himself talking to a darkened, empty Browns Stadium shortly after the orange and brown lost in singularly dispiriting fashion to the Houston Texans.

One week and a half-million views later — it's now closing in on 1 million — the clip was being quoted by fans and turned into T-shirts and passed around by sports media folks nationwide.

Like most of Polk's videos, it was concise; not so much a rant, but a string of lucid, funny statements about our lovely football team — "Do you understand how low our expectations are?" — topped off with a one-two punch line: "You are a factory of sadness! OK, see you Sunday."

There was also "Please Stay LeBron," his parody of "We Are the World" that dropped in the days leading up to The Decision, when LeBronomania hit 11 across the country.

"It was a sellout to try and save my job," he claims now. "Break was probably having questions at that point about me. Nothing of mine had blown up for them yet. The video, in the end, was awful. Embarrassing and awful. But it got them a lot of ink, it blew up for three days, and landed on CNN. But then it got yanked by — God bless him — Quincy Jones for copyright reasons, and that was perfect for publicity."

Three shirt options selected from the women's blouse aisle are in tow. A black bike helmet has been procured, as has a vinyl copy of Billy Joel's Glass Houses. That last one is not ironic or for a bit, just for the joy of Joel.