Getting ghastly behind bars at the abandoned state pen.

October 19, 2000
comment
The Haunted Prison is open weekends through October; see Attractions for details. The ghost hunts run through the summer months; call 419-522-2644 or visit www.mrps.org. 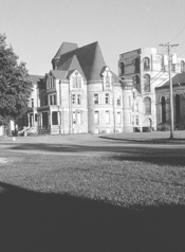 Chances are the inmates at the Ohio State Reformatory in Mansfield weren't offered the services of Mr. Fries or the elephant ears buggy. But despite the presence of such purveyors of fine fair foods in the jail's driveway, the haunted prison tours of the site for the Halloween season are quite foreboding, thanks to the locale itself. The 19th-century structure, inspired by medieval chateaus, was purposely designed to intimidate the inmates, and it appears as though real ghosts were paid to wander the cellblocks to complete the effect.

"I've been trying to tell them, you just open the door and charge people to come in," says Ron Scheurer of the Mansfield Reformatory Preservation Society, which does exactly that for a series of overnight ghost hunts. "You don't need to decorate."

Certainly the structure itself is what makes the haunted house -- with the usual crop of kids in masks, strobe lights, and loud noises -- worth experiencing. Standing in an abandoned cellblock, gazing down a six-story row of rusting bars half-lit by blue lights, had the under-10 crowd whimpering for mommy more than did the silent Jason who tagged along with the group, rubber knife waggling sinisterly.

"The haunted playhouse is just for screams and giggles," Scheurer says. "Ghost hunting is something we take seriously."

Helping create the atmosphere for the serious ghost hunts -- led by a local paranormal investigator known as "Dr. Ken" -- is the fact that the building is technically abandoned, even though it has been featured in several movies, including Air Force One (when it played a "rundown Russian prison"). When the last inmate was ushered out in 1990, the heat went with him, and from there it was only a couple of years until the elements started to shred the paint and plaster, and rust any metal. And then, of course, there are the inmates who refused to leave.

"We believe there are presences there, and the natural assumption is that these would be men who are unhappy over their deaths there," Scheurer says. "It's not something you see -- you don't see Casper in a white sheet or anything." In fact, most of the evidence is photographic. "Generally what you get are these orbs that are round spots of light, that don't have any physical explanation for being there. I do have a couple of pictures that have faces in these orbs."

Other people have seen things, however, like shadowy figures wandering in the graveyard or prowling in the entrance hall before anyone is supposed to be inside. One architect, who spent a day alone in the building, reported having his shirt tugged.

Some people are so spooked, they barely set foot inside. "Once in a while, you get someone who you wonder why they came," Scheurer says. "They'll get about 50 feet into the building, then come back and sit on the porch the rest of the night."

At least they can nosh on elephant ears while the playhouse is creating the scares.