Archer Prewitt's solo career takes on a life of its own with White Sky. 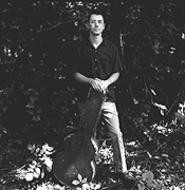 Archer Prewitt is one of the hardest working musicians in Chicago's fertile indie rock music scene. A few years ago, the guitarist/singer/songwriter/comic book artist moved into the neighborhood with his lounge jazz outfit, the Cocktails, and now he lends his guitar and composition skills to the rock and electronics of Chicagoland favorites the Sea and Cake. However, a pair of recent solo albums have helped the reserved Prewitt slip out of his collaborator shoes for a time to pursue a sound and vision of his own. With his latest album, Prewitt has delivered another crafty recording.

Consider the water-warped pop rock of "Shake." The tune opens with a few woozy notes from an electric guitar and then bobs along on Prewitt's airy vocals. Within the three-minute life span of the pop song, this tune crests in a modest swell of funky guitar chords and punchy horns. Prewitt then segues into his catchiest moment yet -- "Shake it off/Shake it all away," he sings over and over, as rowdy baritone saxes and trumpets punctuate every refrain. It's a calorie-free, git-up-and-dance moment -- just one of many that permeate Archer Prewitt's second solo album, White Sky. Nevertheless, upon further investigation, the musical moment makes strange counterpoint to the lyrics. In vague, spare language, Prewitt recounts the bleak story of a woman whose life falls apart as the song builds on its own catchy momentum. By the climax, a swoon of Motown shuffle, the protagonist has foolishly opted for denial; she's going to "shake it all away" on the dance floor.

Prewitt's vocals, distant and icy, go a long way toward giving White Sky its fingerprint. But more than that, it's Prewitt's penchant for odd juxtaposition that sets his album apart. He has always had a soft spot in his heart for pop and rock, but with this album, he sets his musical levity against often bleak, narrative-oriented lyrics. Clever, ironic twists have a habit of slipping into Prewitt's songs, and they give what often seems like a light- to middleweight pop song a surprising, sudden piquancy and a dark heart.

"In the past, I've never written narrative-type lyrics, and [White Sky] was sort of a first attempt at it," Prewitt says. "When I think about a song like "Shake,' I think I'm reaching a point where I can have the music wedded to the lyrics a bit better. I can draw a contrast. I'm thinking about what I can do with a song more than I have before, and that comes from listening to more records."

Even a tune like "Final Season," which opens with a descending guitar line, finds a way to cheer up fast -- in this case with a sunrise of strings. And before long, Prewitt is at it again, singing tense lyrics against his pop arrangements. "And everything is forced to change/I keep repeating a simple panicked phrase," he sings, and the extra syllables in the word "panicked" grate against unrushed, breezy violins and flutes. Before the song is over, it becomes apparent that Prewitt's subject is the inevitability of death.

"My intentions are not to draw sympathy or to draw anybody in," says Prewitt. "That's what I appreciate in Nick Drake's music. He never bemoans his state in life. He's writing songs in a cathartic way, without crying or screaming about it. And yet you get a sense of all that through his humility -- you see the art in it. He's not being garishly naked about it -- veins popping in the throat as he slits his wrists for you. This distance is the place I want to be lyrically. I'm not about revealing too much. I'm more about offering up."

Nick Drake may be Prewitt's inspirational moon, but the four bright suns of George, John, Paul, and Ringo hang in Prewitt's musical sky. A fairly heavy Beatles influence pervades the recording -- not only in the occasional chord progression or vocal lilt, but also in the way that Prewitt, who's quite interested in arrangements and orchestration, often eschews a rock guitar sound for textures built on strings and horns. An avowed believer in The White Album, Prewitt varies the mood from song to song, a bit like the Liverpool boys did. The heavily layered "Raise on High," as one example, starts in a rock mode and later shifts between ruddy Motown horns and straight-backed, almost classical horn arrangements. Prewitt then defies expectations with "Last Summer Days," which, coming after all those string-heavy tunes, almost shocks the listener with its raw, early-Dylan-like harmonica and acoustic guitar opening. In the end, Prewitt comes out on top; like the Beatles, he mixes things up from track to track but still manages to sound perfectly connected and logical.

"I went from listening to children's records to finding a copy of my mom's Sgt. Pepper's and never really looked back," says Prewitt, detailing his own, private Beatlemania. "It just seemed like this other world that was unattainable. But now that I know that I can form a song, being a self-taught musician, I can respect the Beatles even more. What I appreciate about something like The White Album is that you go from opposite ends of the spectrum and you end up with a cohesive work, even though four people are writing the songs."

Though he plans to continue on with the Sea and Cake, Prewitt has no intentions of putting his solo career on hold.

"I love playing with the Sea and Cake," he says. "[But] I've felt that, if my avenue widens, I'd like to do more solo work, because that's where my heart really lies. I write songs all the time, and I'd like to record more consistently, more often. I have practically a double album ready to go in my head. It's maddening to hold on to this stuff for so long and think that it's good enough to record, but then have the passage of time deaden your resolve."