He Feels for You 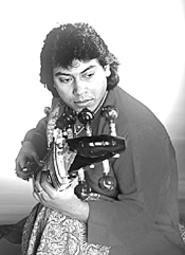 The dynasty is the Khan clan of Muslim maestros, who can trace their musical lineage to the royal courts of 16th-century India. The thirtysomething Khan -- representing the eighth generation of the tuneful family -- debuted in front of England's queen mother when he was 11 years old.

Since then, he's played the world's great performance halls, from the Acropolis in Athens and Moscow's Kremlin to the Royal Albert Hall in London and New York's Lincoln Center. Yet his music has just started to pique Americans' interest. "It's lovely to see that I can share my music with Christians and Jews and Hindus and Buddhists," he says. "That's the beauty of what this music is." Khan performs at 8 p.m. Saturday at Happy Days Visitor Center on State Route 303, west of State Route 8, in Boston Heights. Tickets are $12; call 330-650-4636. -- Cris Glaser

Playhouse Square's Theater for Young People series is going out with a bang. The season's final production, Cirkus Inferno, features messy, pyrotechnic comedy from Lucky and Lady, billed as the world's most dangerous clowns. "We have to have a fire marshal backstage, because there are quite a few things that explode," admits Colleen Porter, Playhouse Square's director of education. Husband and wife Jonah Logan and Amy Gordon -- veterans of such high-flying productions as Cirque du Soleil and Antigravity's Crash Test Dummies -- take explosives to a doghouse, roller skates, and a pair of pants, among other flammable items. "We are agents of chaos," Gordon says. "[We're] anti-authoritarian clowns that remind the audience what fun and beauty can be found when you blow off the rules, bravely follow your instincts, get in trouble, [and] have a few accidents." The Cirkus comes to town at 11 a.m., 2, and 5:30 p.m. Saturday at the Ohio Theatre, 1511 Euclid Avenue. Tickets are $15. They are available by calling 216-241-6000. -- Lucy McKernan

Let the Music Do the Talking

Only one of the artists performing at the Rock and Roll Hall of Fame's benefit concert, No Speeches, No Tuxes . . . It's Only Rock and Roll, is an inductee: Eric Burdon, who was in the Animals. Headliners the B-52's (pictured) may make it in someday; Evelyn "Champagne" King, Southside Johnny, and Ray Parker Jr.'s chances are slimmer. The show starts at 6:30 p.m. Saturday at Public Hall, 500 Lakeside Avenue. Tickets are $15; call 216-241-5555. -- Michael Gallucci