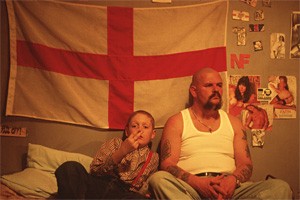 TOP PICK — This Is England (Genius Products)
Dread hangs heavily over this grim portrait (now out on DVD) of a young boy coming of age in early '80s Britain. After his father dies in the Falklands War, 12-year-old Shaun makes friends with an amiable group of beer-drinking, pot-smoking skinheads. But when an older racist pal returns from jail, sides divide, and the threat of violence soaks in. Oi!

VIDEO GAME — Clive Barker's Jericho (Codemasters)
Horror icon Barker's imprint is all over this spooky action game, where the apocalypse lurks around every dust-covered corner. Gamers lead teams of expert fighters, who use everything from high-powered rifles to black magic to fight marching demons from hell. We particularly like the dude who can guide bullets through the air with his hands.

DVD — The Coen Brothers Gift Set (MGM)
Just in time for the sibs' excellent new movie, No Country for Old Men (which opens Friday), this five-disc set gathers a quintet of the filmmakers' greatest flicks. Raising Arizona and Barton Fink are amusing stabs at dark-hued absurdity, and their debut, Blood Simple, remains a top-notch thriller. But best are the 1990 crime saga Miller's Crossing and Fargo, their 1996 masterpiece, which sums up their career with one blood-soaked set piece after another.

CD — The Fiery Furnaces: Widow City (Thrill Jockey)
On past albums, this weirdo brother-sister duo from Illinois has strung together genre-jumping musical suites, written odes to blueberries, and enlisted their grandma to sing about her life. On Widow City, Matthew and Eleanor Friedberger allegedly used a Ouija board to help assemble the hopscotch lyrics about . . . well, we're not really sure what they're about. But the songs rock harder than anything they've ever done.

CD — The Heavy Metal Box Set (Rhino)
The 70 songs on this four-disc set span everything from post-hippie blowouts (Iron Butterfly's "In-A-Gadda-Da-Vida") to pre-grunge hair rock (Poison's "Talk Dirty to Me"). It's a pretty concise history lesson, even if some big names couldn't be secured. But you'll be too busy banging your head to choice Black Sabbath, Judas Priest, and Metallica cuts to notice. Bonus points: It's housed in a package that looks like an amp that goes, natch, all the way to 11.

COURTESY FLUSH, PLEASE — Frank TV (TBS)
Frank Caliendo was MADtv's resident fat guy for a few seasons. He did a pretty good John Madden as well as impersonator staples like Jack Nicholson and Dubya. But his new series (which premieres at 11 p.m. on Tuesday) relies too much on the same one-note characters and jokes. Stand-up bits mingle with sketches, but the relentless parade of impressions quickly runs out of laughs.