Fat Heads Saloon Is Obsessive About Beer And Barbecue 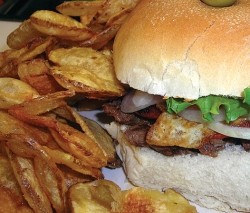 For roughly 60 years, the Danny Boy Farm Market presided over the intersection of Lorain and Columbia roads. What began as a diminutive farm stand blossomed, three generations later, into one of the area's most treasured landmarks. In the fall, families bought their pumpkins and apple cider there; in summer, their tomatoes and watermelon.

When diners cross the threshold of the soon-to-open Fat Heads Brewery and Saloon, they will find a permanent homage to Danny Boy, a sizeable shrine that includes an original sign and a slew of old photos. That likely is all old customers will recognize about the place.

For more than 15 years, Fat Heads Saloon has been one of Pittsburgh's most beloved watering holes. Located in that city's South Side neighborhood, the spirited bar attracts locals and tourists alike with its matchless craft-beer selection, comfortable digs and these things called "Headwiches."

Despite being able to seat 245 at a go, the interior is surprisingly cozy. Designers elected to highlight the cathedral-style exposed-beam ceiling, a dramatic element that resembles an intricate truss bridge. Half walls and booth nooks help break up the sizeable dining room, while carpet does wonders to dampen the sound. Exposed brick walls and wrap-around windows comprise the predominant views.

There is no mistaking that the Fat Heads folks take beer very seriously. In place of the usual beer signs and mirrors are hand-painted logos of the world's most celebrated craft breweries. These vibrant, detailed compositions brighten the entire room. And then there is the brew system, an assemblage of inter-connected copper and stainless silos visible through massive panes of glass.

"This system will be the envy of every brewpub," says Matt Cole, partner and brewmaster. For the past decade, Cole cooked the suds at Rocky River Brewing Co., where he won some of the industry's highest awards. His new brew system, plucked from Arizona's Chase Field, has bells and whistles normally reserved for larger breweries.

At Fat Heads, customers will have their pick from a dozen house beers, including two cask-conditioned ales and two dozen superlative "guest" brews. Customers will be able to purchase beer to go in refillable glass growlers. "We're trying to create the ultimate beer nirvana," says Cole, who has been frantically brewing in preparation for opening day.

It seems that little here is being done half-assed. When chef and partner Derek Wilson decided to add barbecue to the menu, he installed a real pit smoker. Look for items like beef brisket, pulled pork and St. Louis ribs to land on the table bearing that characteristic pink hue and smoky twang. Wilson (Great Lakes Brewing, Sushi Rock) also has spent the better part of a year nurturing a sourdough starter for his pizza dough. Those pizzas will be fired in the same commercial deck ovens found at pizzerias.

While by no means extravagant, menu items will be high quality. Whole chicken wings are dry-rubbed, slow-smoked, char-grilled and mopped at the last moment with sauce. Steak sandwiches are grilled and sliced to order. Chips and fries are cut and cooked in house.

And then there are those Headwiches. Built on large round buns imported from an old Pittsburgh bakery, these over-stuffed monsters ("about the size of your head") bear whimsical names and unusual ingredient combinations. The Full Cleveland, for example, is a collision of brats, pierogies, kraut, provolone, 1,000 Island and Stadium Mustard. Rounding out the menu are bar-house munchies, salads, burgers, subs and melts.

A large chunk of the interior is devoted to the barroom, the cornerstone of which is a 35-seat curvilinear polished-concrete bar. Taps are installed everywhere to keep pour time to a minimum. Nearly a third of the main dining room is reserved for fun, thanks mainly to a refurbished vintage bowling machine, three bristle dartboards and a few pool tables.

The best seat in the house may not be in the house at all. Fat Heads has outdoor space to spare, and come the warm weather, look for a patio to sprout on three sides of the building. There will be beer-barrel tables for drinking, traditional tables for dining and, perhaps, cornhole boxes for tossing. Situated beside a massive parking lot, Fat Heads anticipates throwing one heck of an Oktoberfest bash.