Head of the Crass

Police say Michael Gonzalez preyed on his students, then disappeared. 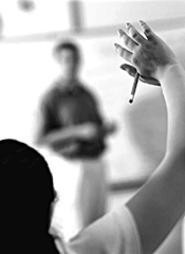 He'd been coming to these things for years. It was the fall of 2002, and Angel Montanez, father of four, knew the Back-to-School-Night routine: Get the schedule, meet the teachers, check the grades. With any luck, he'd be home in time for a late dinner.

But that night, when Montanez and his daughter walked into her art class at Cleveland's Rhodes High, something felt . . . wrong. Something in the way the two of them, teacher and student, laughed together. It was the kind of insider giggling that makes a father queasy.

Montanez' daughter was only a freshman, a tiny 14-year-old. The teacher with the warm smile was young-looking, soft-faced -- and probably 20 years older.

"You guys got something going on?" Montanez recalls asking as dad and daughter walked out.

Of course not, she said.

"That," says Montanez, "was the end of the conversation."

For the teacher, the night should have been equally routine. Michael Gonzalez had been in the classroom for nine years, with stints in Cleveland and East Cleveland. He was 33, and most of his adult life had been dedicated to teaching. He came highly recommended by his art-education professors at Ohio State. When he interviewed for his first job with the Cleveland Municipal School District, he was deemed a "highest-quality candidate" -- the sort of young, athletic, enthusiastic teacher-coach that districts crave. "He was a good teacher," says Phyllis Brown, another Rhodes art teacher. "He was just interested in . . . other things."

That fall was Gonzalez' first at Rhodes. Brown and the others didn't know much about their new colleague. He grew up in Lorain County, had a wife who was a teacher too. Word was that the couple was on the outs.

They'd been married just a year and a half and were still settling into a cottage in Cleveland Heights. But it'd been rocky from the start, and Gonzalez moved out that December, says his ex-wife.

Then a female student began e-mailing Gonzalez almost daily. The girl was a sophomore -- one year older than Angel Montanez' daughter. The notes spilled details of the girl's sordid home life and begged for the handsome teacher's attention. "I need affection," she wrote.

He obliged: "I am here for you, whether you need a hug or a talk."

They continued, day after day. At first, he appeared to try to keep it professional: "I am sorry you had to go through all that. But you have to understand that I am in a unique position."

She pushed harder, further: "Do you think it is not hard for me to keep my mouth shut. i would like for everyone to know that you are this amazing person . . . i do love you and i mean it."

The e-mails don't suggest a physical relationship -- there are no references to hanging out, no Thanks for a fun time. But by the end of January, the language was looser, and there was talk of going to a concert.

Student: "About the concert, who has to know?"

Gonzalez: "Frankly I'm worried that you'll tell someone, then my ass is grass, and I'll get fired, and there goes my sorry ass career."

Student: "If you don't want to go then i can respect that because you are a teacher and i am a student, but i really don't care I like you . . ."

Gonzalez: "Ahh, you're so damn nice."

That was a Thursday. He was supposed to take the weekend to think about it, but by Sunday, his mind was made up -- about the concert and a lot else. "My kindness to students is landing me into almost hot water . . .," he wrote. Another teacher had called him out for being too close to the kids. His co-workers were "getting pissed and a whole bunch of other shit about public perception of me. I can't have it." The concert date was off. "Thanks, but I can't. I can't even e-mail you any more."

Two days later, district records show, the girl's mother showed up at school, a stack of their e-mails in hand. Principal Daniel Hanstein confronted Gonzalez. The next day, he apologized to a district investigator, acknowledging that the e-mail relationship had gone too far.

Gonzalez was immediately reassigned -- first to headquarters, then to Hamilton Middle School. The girl wouldn't say anything, and her mother didn't want police involved. Transferring him was the only option, says Adrian Thompson, the district's top lawyer: "I didn't have evidence. If we tried to fire him, he would have gotten hired back."

Almost three years later, on a frozen November morning, Angel Montanez is squeezed into a small, dusty car in the parking lot of a West Side McDonald's. His 15-year-old son sits in the backseat. One of the winter's first storms sprinkles the car with a thin layer of white flakes.

At first, Montanez chooses his words with caution, seemingly mindful of his boy in the car. But as he walks the tale back to his daughter's freshman year, fatherly fury wins out.

"What he wanted was a piece of pussy, and he got it," Montanez says, volume rising with each syllable. "And he didn't just get it once."

Not long after Gonzalez and his wife split, Montanez says, his daughter came home with a question. She wanted to know if she could go out with her art teacher, the guy from Back-to-School Night.

"Are you out of your mind?" he asked.

The next day, he went to school to tell the principal about his daughter's crush. Not long after, the teacher was transferred out of the school. As far as Montanez knew, he had averted disaster.

But on May 27 of this year, in the middle of a school-day morning, his daughter called, weeping into the phone.

"Remember that teacher I had a crush on?" Montanez recalls her saying. "They're interrogating me about him."

Montanez rushed to the school. He found his daughter sitting in the office with school district security officers, which triggered the queasiness he had felt years earlier.

Your daughter, they told him, had sex with her art teacher. The girl's friend had tipped them off.

Montanez' daughter denied the affair. "Nothing happened," she told the officers, according to their report.

(District security officials and Cleveland Police wouldn't comment on their investigations, nor would Montanez allow Scene to interview his daughter.)

Dad and daughter drove home in separate cars, while district security went looking for Gonzalez. But on her way, the girl called the teacher to warn him, she later admitted. When officers arrived at Hamilton Middle School, a secretary told them that Gonzalez had called the office earlier to say he had an emergency and had to leave. His grandmother had an hour to live, he told the secretary.

At home, Montanez grilled his daughter about the affair.

Montanez filed a report with Cleveland Police, who quickly issued a warrant for the teacher's arrest. But he was gone. Phone numbers linked to the teacher are dead. E-mails sent to his address get bounced back.

Prosecutors filed sexual-battery charges in September, but Gonzalez didn't show up for his arraignment.

In Amherst, neighbors of Gonzalez' mother say they remember hearing something about the family's adult son moving back in this summer. But they don't remember seeing him. His mom angrily told Scene that she has no contact with her son and has no clue where he is.

He may be in Puerto Rico, where apparently he has family. School-district officials say that a woman claiming to be Gonzalez' mother called last summer to say that her son had moved there. According to the district's report, Montanez' daughter told a friend that "Mr. Gonzalez had left the country."

Until last week, no one had really been looking for him. Gonzalez' name is among 12,000 on the massive list of outstanding warrants maintained by the Cuyahoga County Sheriff's Office; it doesn't have the manpower to hunt them all. But after Scene called the sheriff's office to ask about its search, "We've been jamming on this as a priority," says Sergeant Robert Chilton.

He spent last week knocking on doors in search of Gonzalez. Renters at properties the teacher owns -- including his old apartment in Shaker Heights -- told investigators that they now pay their rent to Gonzalez' mother. A search of her house turned up no sign that he might be staying there. "We're out of leads," says Chilton. He too believes that Gonzalez may have fled to Puerto Rico.

Chilton says he'll keep looking -- which is about the only thing keeping Montanez sane.