An Akron band gets robbed in a practice-space break-in. 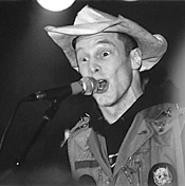 When Kris Dann left the Cleveland hard-rock group N-Factor to start a new band last fall, he took his collection of customized guitars with him. Now the gear has disappeared from Dann's Akron rehearsal space, the result of an apparent theft. A band that shares the space left the building at 9 p.m. Saturday, February 7, and returned at 2 a.m. to find the door pried open.

According to Dann, the missing gear includes several flying-V guitars, a bass, sound equipment, and effects pedals. The items, valued at approximately $15,000, had been collected over 10 years. He's offering a $5,000 reward for information that leads to the culprits.

"This was a personal attack," says Dann. "They left behind my drummer's stuff and didn't touch my singer's stuff."

When Dann left N-Factor last year, singer Jim Drummond followed him to form Hatecore Inc. Dann describes the new band as "hardcore meets old-school -- Hatebreed meets Slayer." They were about to record a three-song demo at Lava Room Recording, the studio owned by former Warrant guitarist Billy Morris. Two shows are scheduled for the end of March, at the Hi-Fi Club and Peabody's.

"I gotta get my credit card out," says Dann. "This ain't gonna stop us." He can be reached at 330-414-0800 or via kris@hatecoreinc.com. For a complete list of the stolen equipment, go to hatecoreinc.com.

· Following a breakthrough 2003, the postmodern blues dynamos from Akron, the Black Keys, have landed a slot at 2004's Coachella Festival in California. Their May 1 show will also include such groups as Radiohead, the Pixies, Wilco, and . . . And You Will Know Us by the Trail of Dead. Last year, Coachella drew nearly 70,000 fans to four stages spread over 78 acres.

The triumphant Keys will return to Akron's Lime Spider March 5 and 6. Tickets are $10, available through www.ticketweb.com.

· Singer-songwriter/bassist du jour Tim Tobias has split from indie-rock giants Guided by Voices, but the band's frontman, Bob Pollard, is still in touch. Pollard is recording yet another solo LP at Kent's Waterloo Studios, with Tim's brother Todd Tobias producing. The as-yet-untitled LP is slated for a summer release.

· If you're a local DJ, can truly kick it old-school, and have the skillz to pay the bills, WRUW-FM 91.1 DJ Jay Lewis is looking for you. Lewis is accepting mix-tape submissions for his show A Shot of R.U.M. (Real Urban Music), which airs Wednesdays at noon. A local mixmaster will be featured every week in March.

"So many local and regional DJs never had the chance to show what they can do," says Lewis. "I'd love to get a DJ who can put together a real decent old-school mix -- not just the same old songs. I'm looking for people who can do something different -- hip-hop, deep house, R&B, reggae. And techniques -- cutting, scratching, blending, fading. And it has to be decent for radio play: no swearing, no cussing."