Heading Out to the Highway

Rob Halford, badass motorcycle and all, rides again with the mighty Judas Priest. 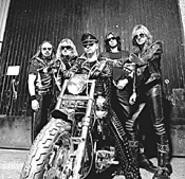 Bottom line: Judas Priest forged, in iron and molten steel, the very foundation of heavy metal. The stoned-out, low-end pummeling of Black Sabbath seems a distant cousin to Priest's screeching-eagle sound. Unlike their neo-satanic brethren, historically the Priest boys have largely concerned themselves with individual rights -- specifically, the right to drink, fornicate, and trash respectable establishments without Big Brother breathing down their necks. Taking metal further than anyone thought possible, the band's overdramatic vision encompassed spectacular motorcycle accidents, depraved macho fantasies (with nary a mention of women), and the sort of revelry unheard of since Caesar's day.

Judas Priest clearly didn't meddle with angst, funky haircuts, or whining complaints of parental abuse, as have so many modern metal acts seemingly born in Wal-Mart parking lots or Halloween-costume closeout sales. The almighty Priest embodied, in essence, the lone rebel on a motorcycle, cruising into the sun after a night of rippin' up the town. The band fed into an unhinged, adolescent hard-on fantasy of burning rubber, turbo speed, and oversexed humping, and did so in a spectacular, grandiose, Andrew Lloyd Webber-like manner.

Recently, this fierce dragon has returned to roam distant forests and lonely highways with notorious lightbulb-shattering screamer Rob Halford, apart from the band for 12 years, once again at its head. Though band members are gray-haired and a bit flabby, their fiery, classic-sounding new record, Angel of Retribution, proves that Priest's still capable of generating implausibly fierce music.

Talking up the album over the phone, Halford describes the disc as "very much in the tradition of past Priest records, keeping with our heritage. There's a Lord of the Rings-like epic song," he says, "which I believe will be another Judas Priest classic. And there's a bit of a J.K. Rowling influence on the record too -- everything we've done from Sad Wings of Destiny to Painkiller."

Halford is thrilled to be hanging out again with his old bandmates (guitar wizards Glenn Tipton and K.K. Downing, bassist Ian Hill, and drummer Scott Travis). For their latest tour, Halford says, Priest fans will get what they'd expect: a sampling of the band's masterworks and the suitably theatrical return of the hellion himself, onstage astride his favorite stage prop.

"The motorcycle is sort of like Angus Young's school pants," he admits. "It's definitely cartoonish. But it's what the fans expect and what they'll get."

Judas Priest originally came together in 1970 in the industrial netherworld of Birmingham, England, which served as an inspiration with its crummy weather, pollution, and factory blight. Halford joined a few years later, whereupon the band released its forgettable debut album, Rocka Rolla, featuring a long-haired Halford presiding over a prog-rock sound. (Neither the prog nor the flowing locks lasted.) Priest's next album, Sad Wings of Destiny (Halford's favorite in the catalogue), established a heavier sound and not-quite-galloping-yet guitars.

Incidentally, Destiny's "The Ripper," written from the perspective of Jack the Ripper, marked the band's first song involving a rapist protagonist. But not the last.

British Steel (1980) became Priest's first huge success, featuring two of the band's most defiant singles, "Living After Midnight" and "Breaking the Law." And in the early-'80s metal heyday, Judas Priest peaked with the gargantuan riffs and byzantine solos of Screaming for Vengeance and Defenders of the Faith, two albums that alone embody heavy metal with such hits as "You've Got Another Thing Comin'," the semi-explicit rape fantasy "Eat Me Alive," the paranoid Orwellian sci-fi number "Electric Eye," and the veiled S&M tribute "Pain and Pleasure."

It was also in the late '90s that Halford announced his homosexuality, shocking thousands of supermasculine Priest-adoring heshers across the globe. For whatever reason, music fans seem to lack gaydar, as is obvious from the surprise that also greeted the outing of Queen's Freddie Mercury and George Michael. (All three had an excessive fixation on studded leather.)

That's shock, not disdain. "It's a myth that I received any flak from the metal community over my decision to come out," Halford says now. "I have, in fact, received numerous positive responses from fans, as well as e-mails from people who were going through much the same thing. It's horrible to keep something like that secret, and I felt I had to make it public. I discovered that I was gay when I was about 9 or 10. I did go out with girls for a while, but it didn't last."

However, Halford's leather obsession is now strictly for the stage.

"I like to remain somewhat anonymous," he says. "I could never handle the whole Britney Spears syndrome of being noticed everywhere. I enjoy being able to shop at Ralph's without being bothered. So the leather getup is really an onstage uniform. You don't wear a three-piece suit to go play basketball."